“There are wolves, it is dangerous,” I read on a screen. “The police will not allow you to take this road,” this appears not much later on the same screen of a Chinese girl. Thorsten told that in the Lonely Planet he had read that without a travel permit there is a chance to be not allowed on this road. It went around in my head, if I could not take this route then I needed to do a detour of at least 500 kilometers. I had to try it.

It was secretly even exciting.

Ready to leave, she tried again: “There are frozen springs you can not pass.” I had already made my decision. I went through the Qinghai-Tibet Highway along the border of Tibet to Kunming in the south of China. If I needed to sneak along a police checkpoint, still I would try.

We arrived in the city of Golmud, Thorsten and I ate one last time dinner together. I went south and Thorsten towards Beijing. We said goodbye and I began a search for an inexpensive hostel. I could use a shower after spending a long time without in the sandy Taklamakan desert.

Through a motorcyclist on the road to Lasha in Tibet and loaded with more than three times my luggage volume, I ended up in a hostel. 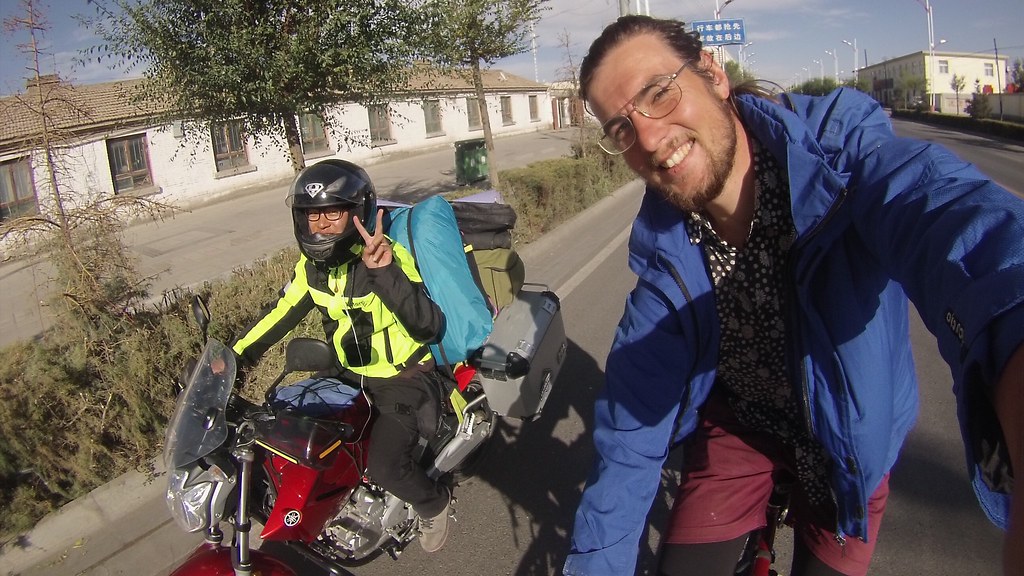 In the hostel I met Rose (almost all Chinese young persons give themselves an English name), who throughout the evening was fascinating watching a piece of spine from a horse. She had found it in the desert, at the foot of a mountain near Golmud. 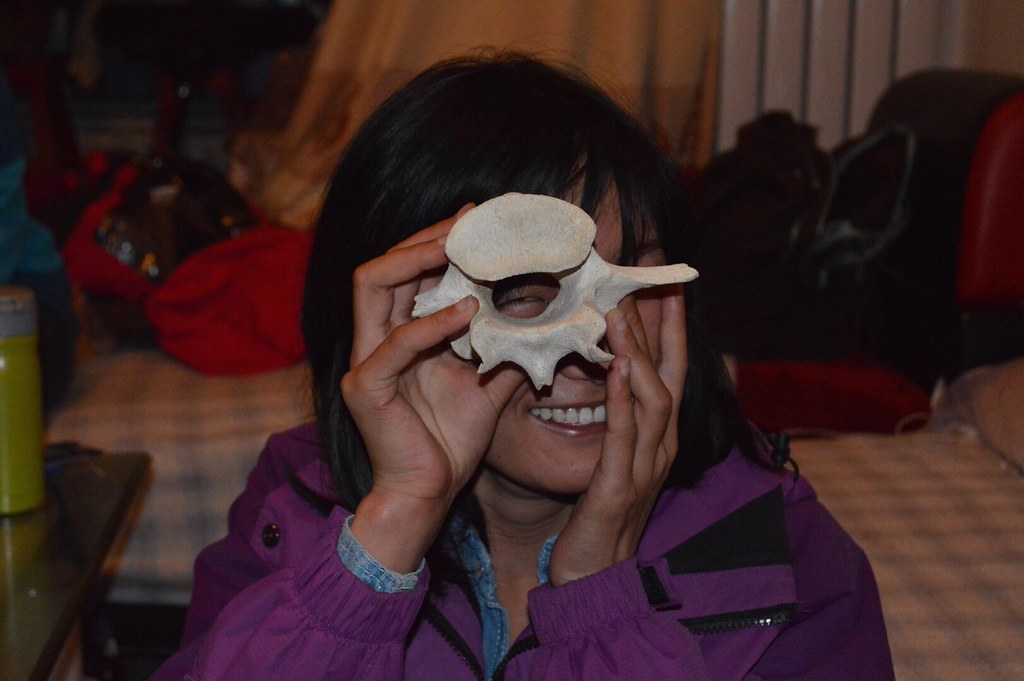 The next morning she woke up with back pain. A discussion with another girl resulted in the conviction that the pain was from the spine which she had found. She decided to bring the bone back to the desert.

So I left Golmud and rode out of the town following the Qinghai-Tibet Highway, not knowing whether I soon had to go back the same road again. I expected a police checkpoint after five kilometers. It did not come. After 30 kilometers, I saw a large building in the distance. That had to be it! Do I immediately try to sneak around it or just see what happens?

I decided to go for the latest decision.

A heated discussion was created with three agents. Whoever was in charge pointed to a sign with meaning that all foreigners need a special travel permit for Tibet. In practice this means that you have to pay for someone who keep constant track of you, called a tour guide. Of course I did not have the permit. I began to explain that my route does not go through Tibet but along the Tibetan border to Kunming in southern China. Just when I thought it was not going to work, the redeeming words came: “You promise you do not go to Tibet.” In my head I screamed it out. I gave him a friendly nod and jumped back on my bike. This could be the most impressive route of my journey so far.

Easy? No, I began to climb the highest mountain of the entire journey. After two days, I finally came up on the top of 4768 meters. 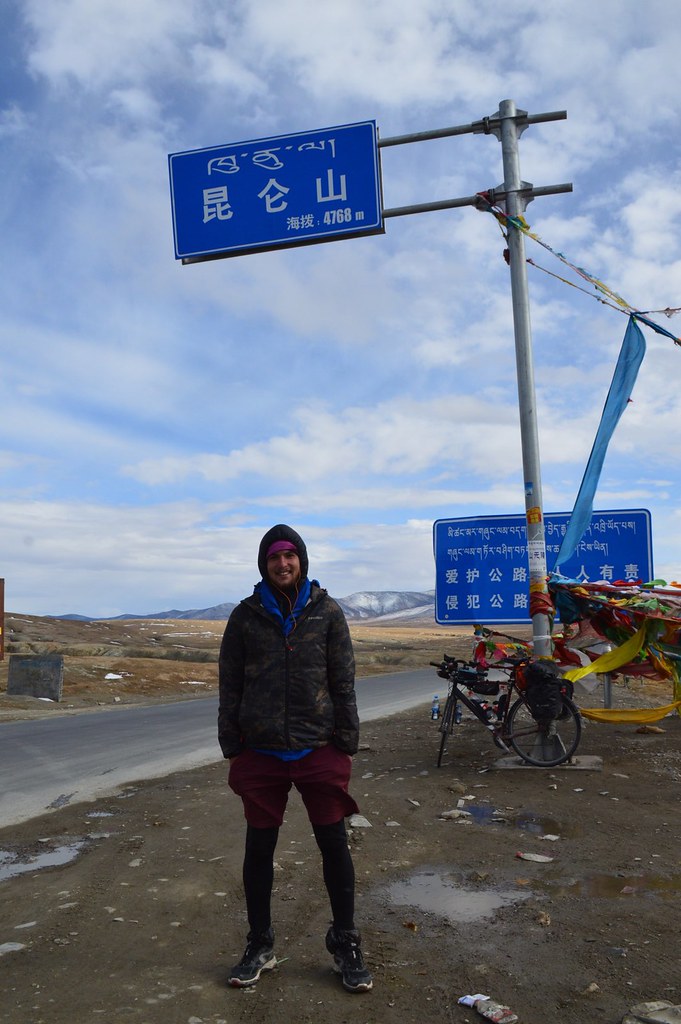 The descent did not last long. I cycled into the highlands where I lingered between 3500 and 4500 meters. After 20 kilometers, I arrived in a first Tibetan village. Here I met an English couple who were doing wildlife spotting. She said that through my route I would cycle through vast steppes with lots of wildlife. When they showed a picture of wolves, I began to wonder whether I had to take the girl from the hostel serious. Fortunately she told this animals were more fearful of us and they are also not to be seen without a telescope.

That made me feel save again.

My first night was a feast. When I hang my last night wet snow tent in the wind, it froze. It was handy because now I could knock the ice off. A new way of drying. The night after that was not very comfortable. 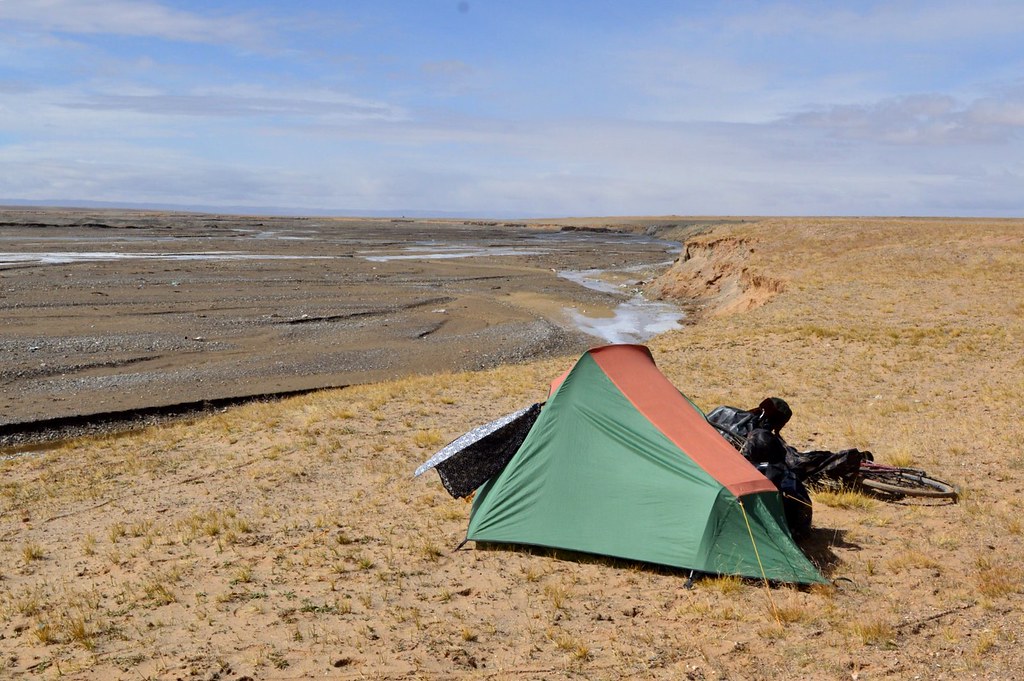 The next morning I rode my first kilometers in an area where there really is nothing but nature. After 60 kilometers I came across nothing but a phone mast. The next day I began to see herd of yaks along the way. Gazelles ran in front of me. Big hamsters ran from hole to hole. I could not believe my eyes. My highlight so far was a group of wild boars in Turkey in the night when I was searching for a camp spot. 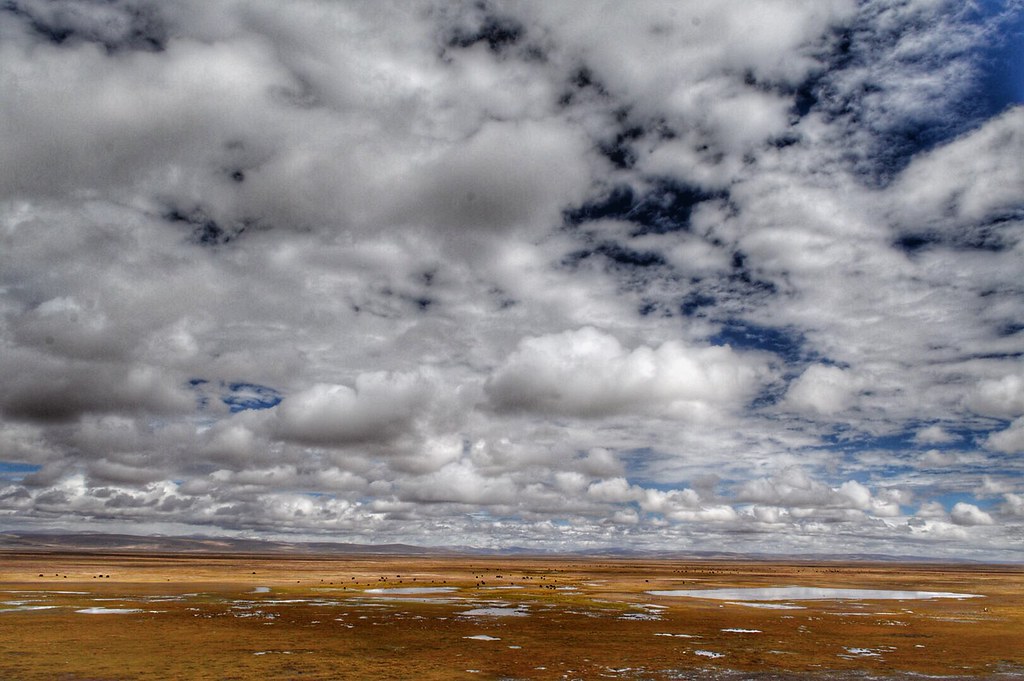 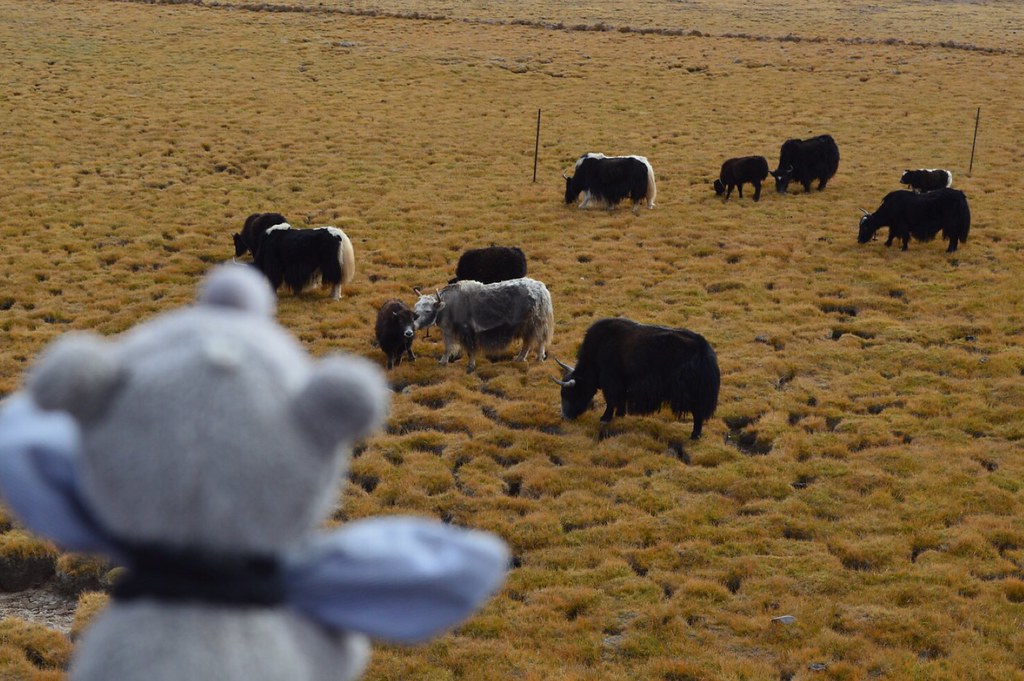 So went day after day. Where I cycled was not officially the Tibet province but the culture was there. Most people here in Qinghai-Tibet still wear traditional clothing. 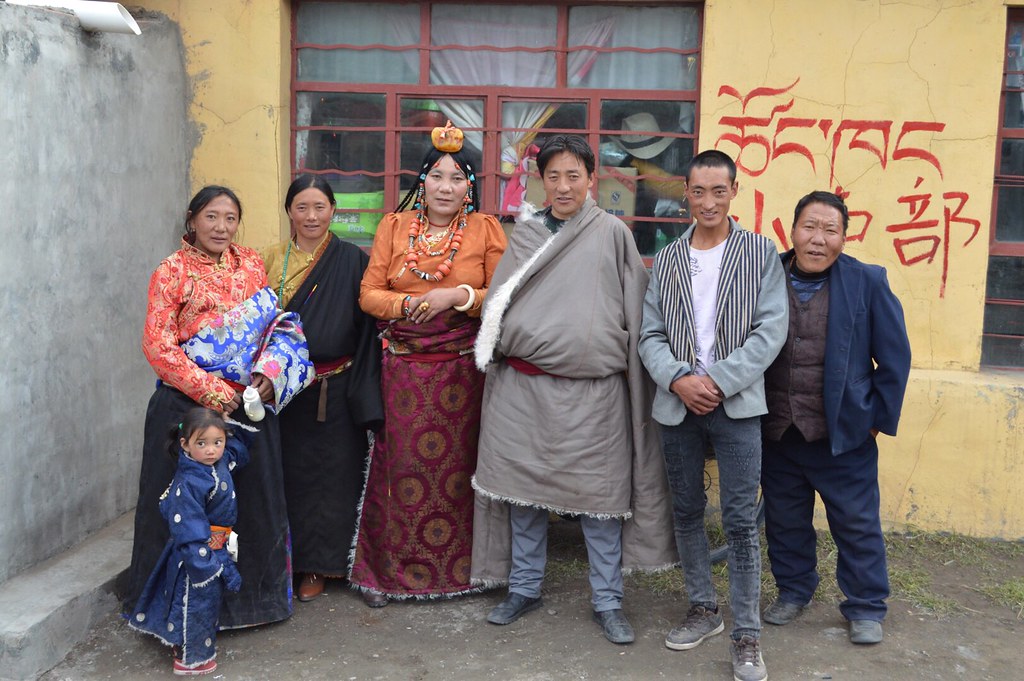 Sometimes I stopped at one of the tents along the way. Soon became a hot dish offered of yak milk. In the tents I saw sometimes monks in red-yellow dress. 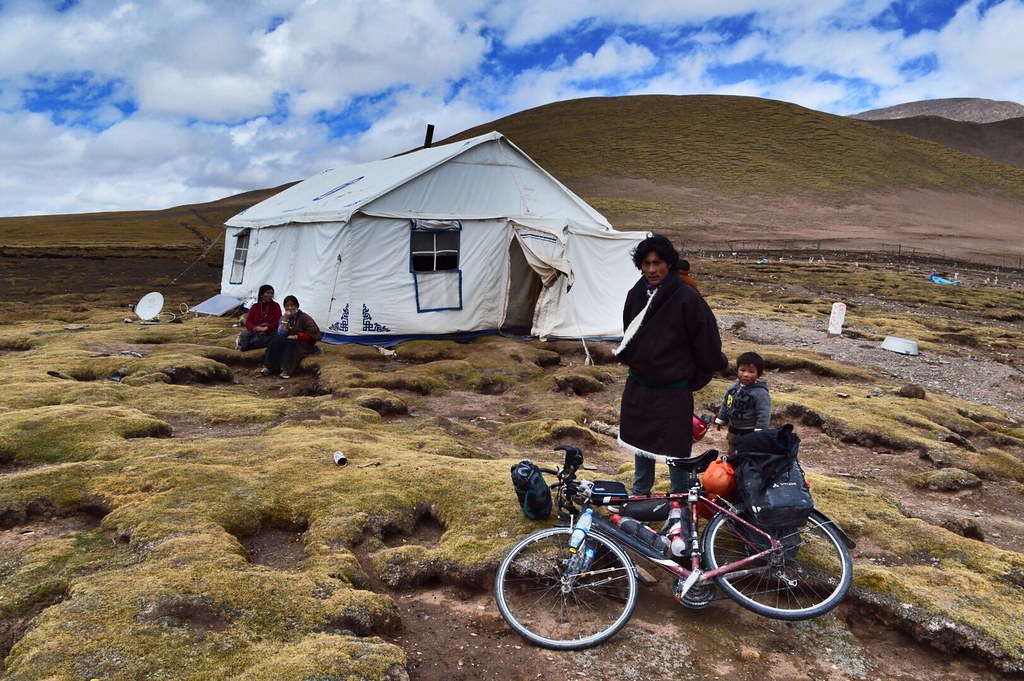 Cycling at this altitude is quite tiring but I maintain. It is cramped because I still have a month ahead of China and then my visa expires. I head quickly to the south to also get a taste of the real Chinese culture.

For now, still learn about and enjoy the colorful Tibetan culture!