A sign indicated that the next resting area would be another two kilometers. A rest area is a snow-free parking lot with one or two toilet cabins and some waste bins. You see them every 25 to 50 kilometers along the Alaska Highway that I follow. It was late in the day and I was planning to set up my tent on that rest area. It is not very comfortable camping because it is a bit close to the road, but it saves some time and effort of shoveling snow. If I’m lucky then there can be a social interaction with passers-by.
The other day trucker Vince offered me a cup of coffee in the morning, “Tim Hortons,” he said, “that’s a thing here in Canada.”
With a nice filter coffee from Tim Hortons I was able to warm up a bit in his cabin that morning.

I pushed a bit extra for those last two kilometres, it had already been a long day of cycling. A large snow plow truck came up from behind me. It was quiet on the road and I could do him a favor by moving to the other side of the road. The wagon whizzed past with a great mist of snow descending on me. I cycled to the other side again, when the truck suddenly came to a stop. A man got out and motioned for me to stop. With a serious look on his face he started to tell me:

“I just have to warn ya, a little further along the road and just after that upcoming rest area, a grizzly bear dragged a moose off the road into the woods. That moose must have been hit by a car or something. It was last week, I thought you wanted to know.”
He got back in the truck and disappeared in a great cloud of snow. I had to think that one over, what should I do with this information?

And yes, a bit further I came across the crime scene. 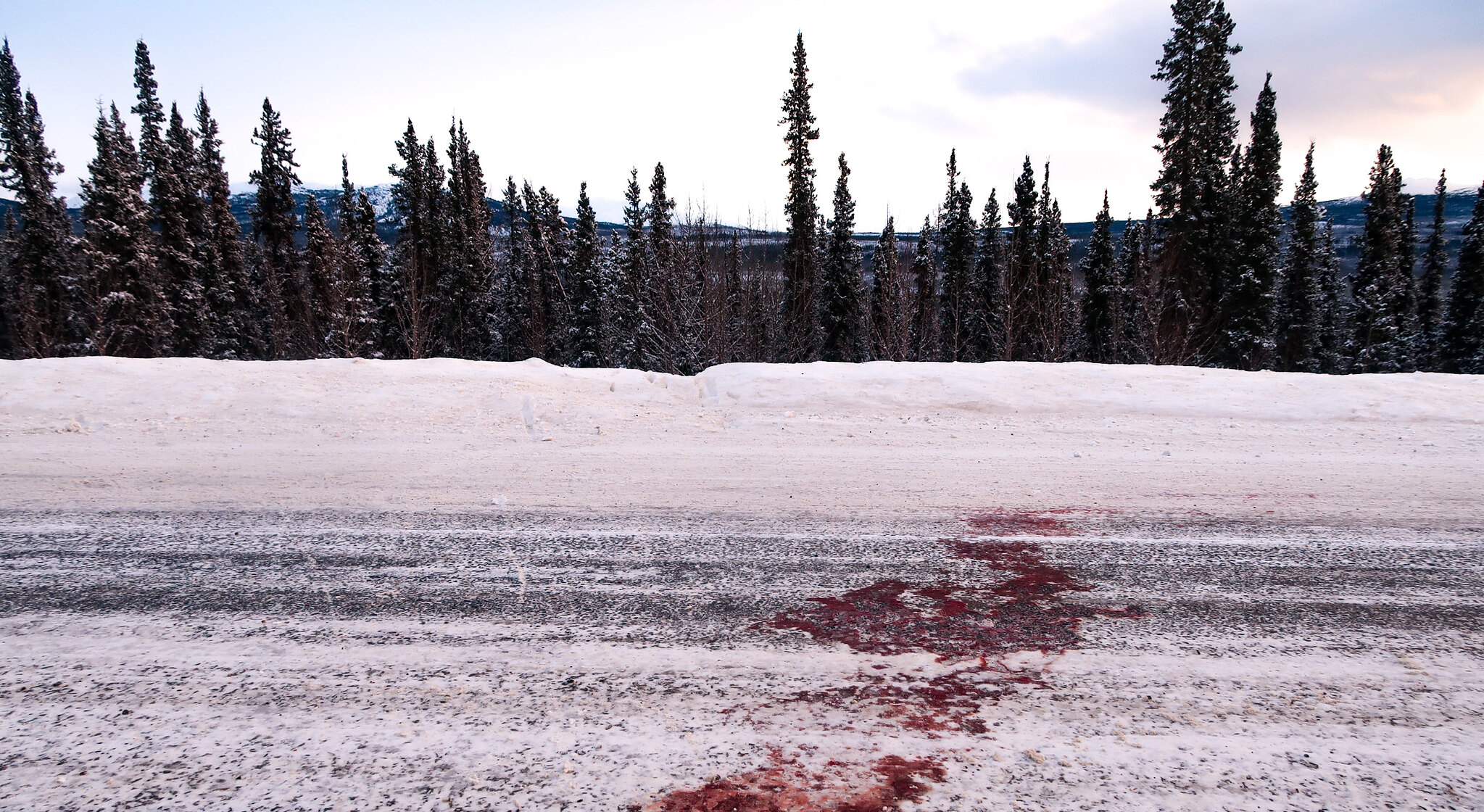 Kat and Thomas in Whitehorse were really wonderful lovely people. Of course Kat recognized me when I told of our meeting along the Alaska Highway in Alaska.
“Ooh! You are that biker, we already expected you!”
When she invited me on the road I was wearing a mask to protect my lungs from the cold. Thomas is from Alaska and has friends there from the time he lived in Alaska. He worked there as a firefighter, especially in the summer to control the wildfires. Hard physical work, he told me, now he works as a helicopter pilot. Kat is from Alberta, lived in Whitehorse for a while and so fate brought them together.

They had not lied a word from the interaction in our first meeting. I was given food, allowed to shower, they gave me my own room and they insisted, stay as long as you want! I think our personalities just matched very well, they were so easygoing that everything kind of felt as a continued road cycling downhill. Nothing felt forced, it was just getting acquainted and it went by itself. We went out to play board games with their friends. A very funny evening was when we went to watch the movie Water World, a somewhat exaggerated apocalypse story that Thomas is a big fan of. Thomas was also a fan of repairing stuff and so he helped me get some much needed repairs done right. Among other things, a burn hole in my tent, the tears in my boots and a broken attachment of one of my front bags.

I was also able to call my girlfriend Lisa, who had watched the documentary The man who wanted to see it all, about cycling adventurer Heinz Stücke.  Heinz cycled around the world for 51 years, starting in 1962.
“People always wondered if he started yesterday because he always looked so neat,” Lisa had pointed out.
“It’s best to take an example from that, your mustache hangs a bit over your lip and you should do something about it.”
So it happened that just before I left, I was allowed to borrow Thomas’ clippers and I jumped back on my bike with a perfectly trimmed mustache when I left Whitehorse.

It would be a bit tricky to stay so neat, the road and spots to sit inside after Whitehorse were extremely remote. I would pass only the native village of Teslin and then there would be a 260-kilometer stretch of absolutely nothing before I reached Watson Lake. Things didn’t get any better after Watson Lake. A nice challenge for me, because I have never cycled such remote parts in winter. After Watson Lake came Fort Nelson and Dawson Creek. Together about 1500 kilometers, with a number of places that can be counted on one hand, such as Teslin, Liard Hotsprings, Toad River and Pink Mountain. Often places with only a gas station and with luck a small supermarket and restaurant. 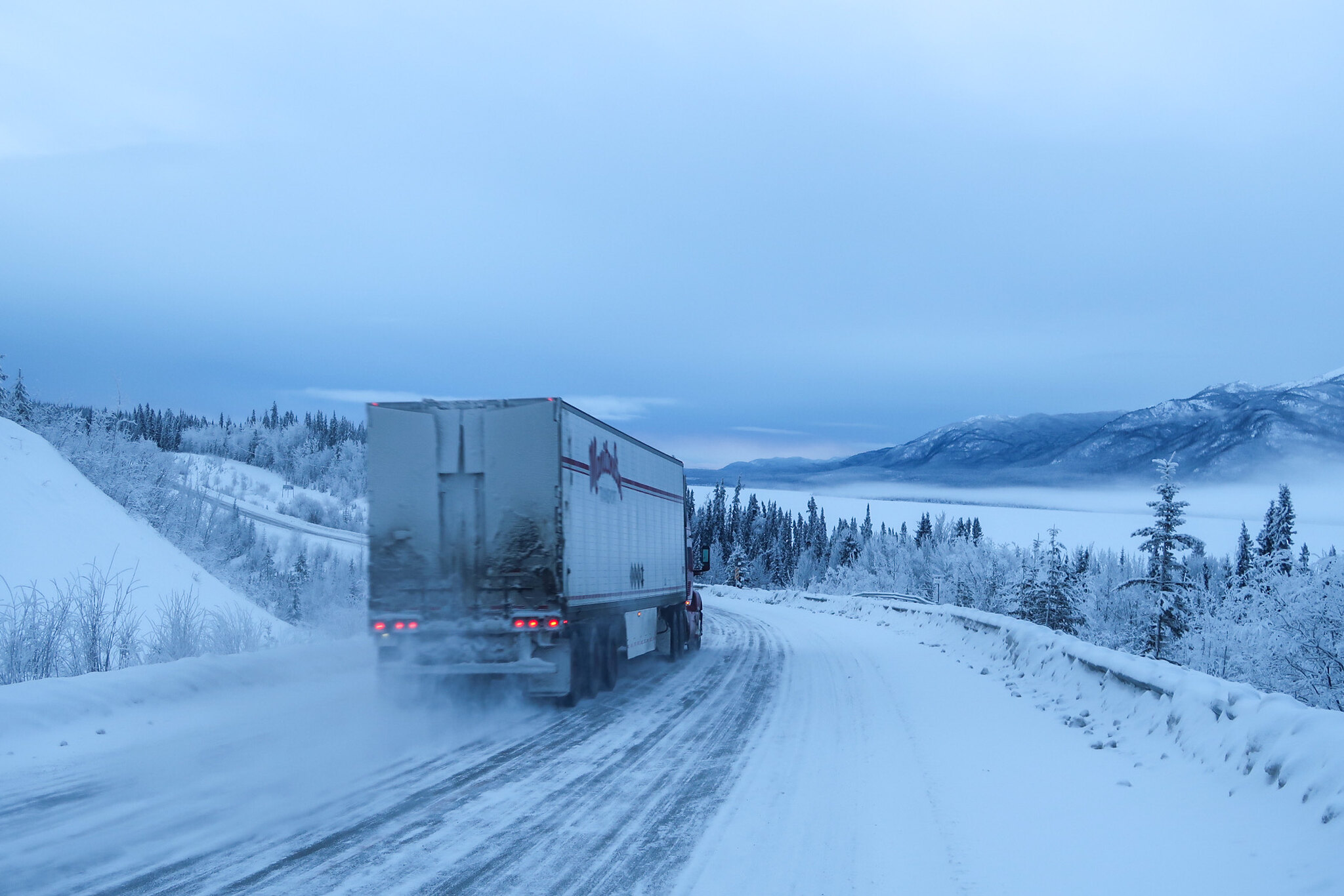 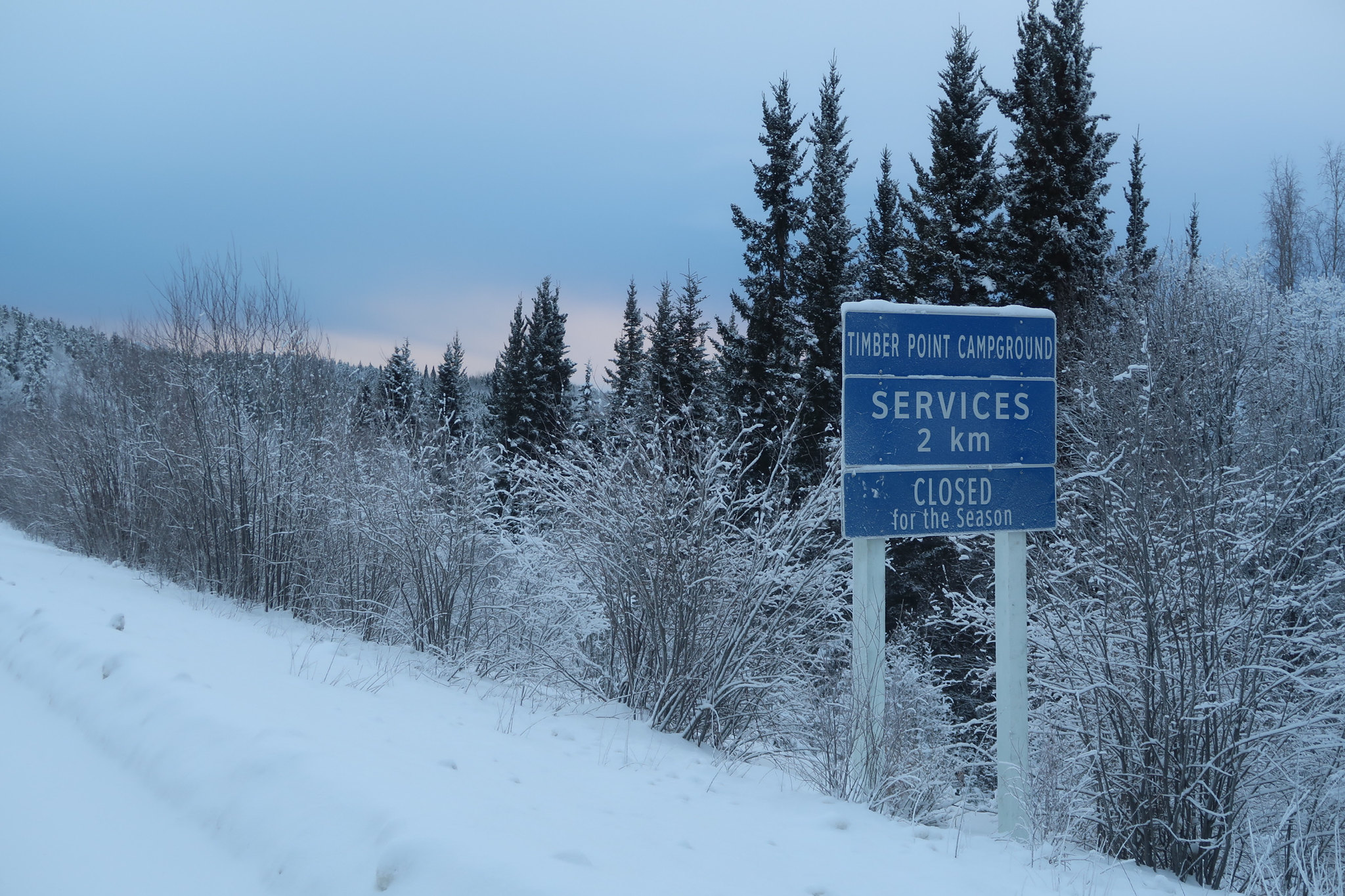 During my stay with Kat and Thomas I made daily packages with about 4000 to 5000 calories. I made some meals with pasta pesto, which I could take with me in the outside freezer. An upgrade from the freeze-dried meals, which are often a bit skimpy to really replenish all the calories I burn with cycling and surviving the cold. Kat offered to drop me a box of supplies at Watson Lake. I did not want to miss that opportunity, the supermarkets in Whitehorse are a lot cheaper than in Watson Lake and Fort Nelson.

Towards the end of the afternoon on the second day on the road I decided to make some effort for a camping spot. I ended up at the beautiful Marsh Lake. Temperatures were still mild. In general, January is characterized by average temperatures of -20°C here, but now it had been warmer for weeks, except for some cold nights. I had set up my tent on the ice of the lake when someone on a snowmobile came to take a look. It was the friendly Berry who lived down the road, he came to have a chat and invited me to his house for a cup of tea. He was very proud of his hunting collection and insisted that I ook a picture of that. 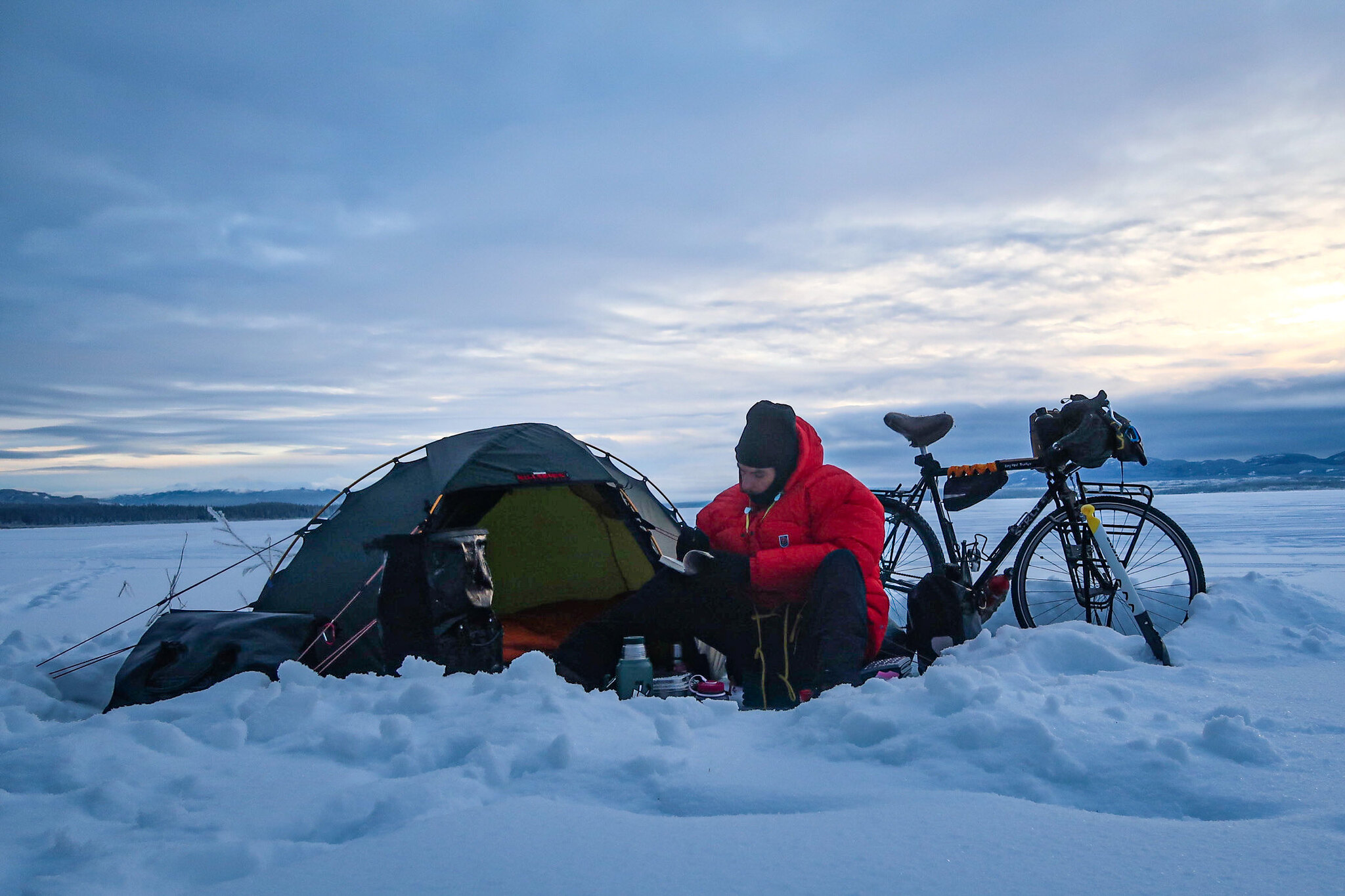 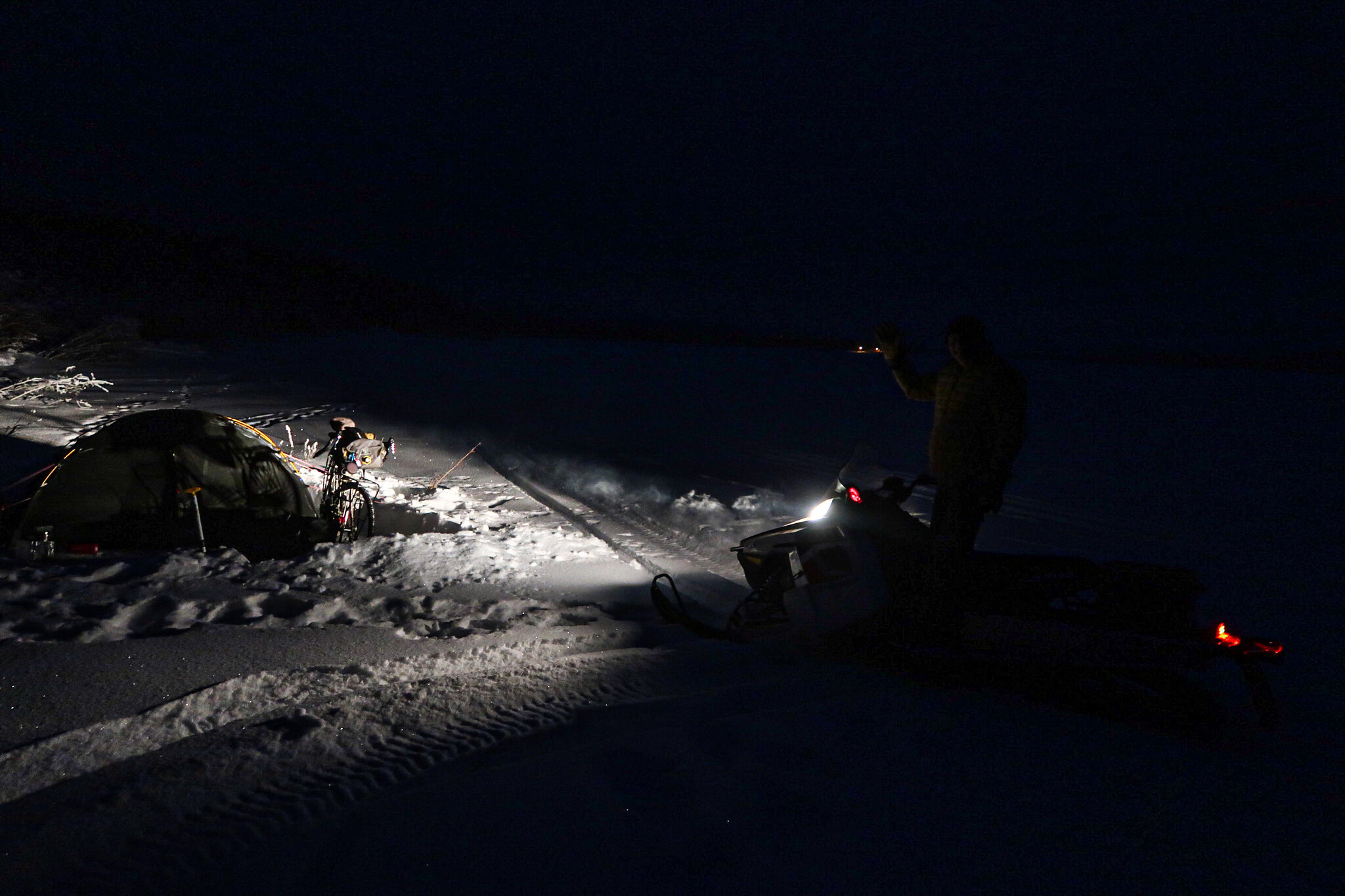 In the morning I got a visit from a fox. Careful at first, but when I offered the fox some sausages, it soon became familiar with me and came back regularly to take some more. It was very nice to have the animal around for a while. 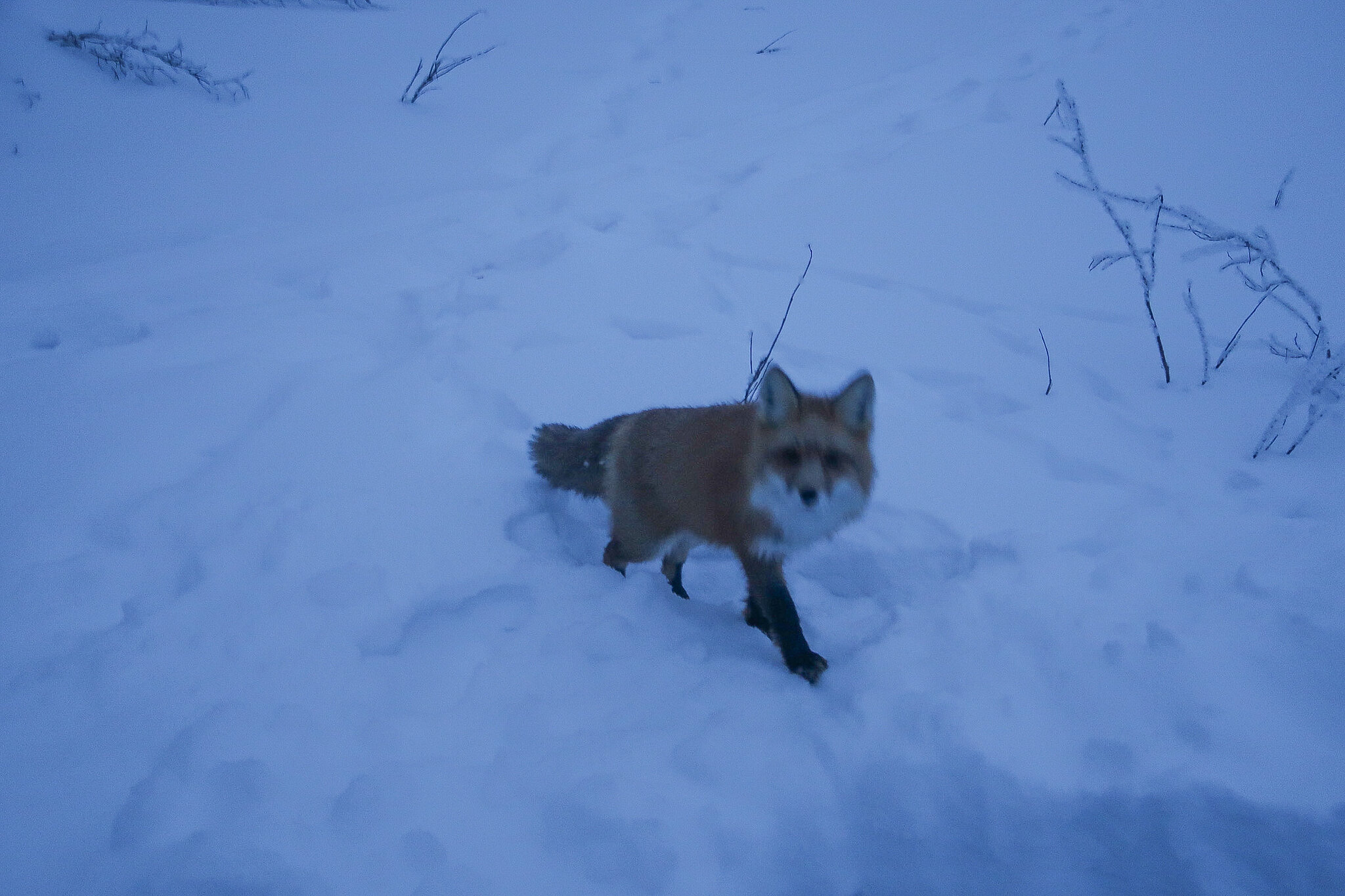 Long days and lots of cycling, that’s how the trip from Whitehorse past the village of Teslin to Watson Lake was drawn. I often made a campfire to warm up before I crawled into my sleeping bag. The day packages did a good job and a highlight was the dried coconut milk powder recommended by Kat. Delicious with hot chocolate and sometimes a scoop of it in my cup of Tim Hortons instant coffee.

It was quite exciting when I arrived in Watson Lake, would there actually be a box waiting for me at Tags Food & Gas?
“Oh, you are the person of that mysterious box!?”
Said the lady behind the counter enthusiastically.
“It’s been here for two days and it’s incredibly heavy, come and grab it yourself.”
With a smile on my face I took the box to a seat in the restaurant to unpack it. 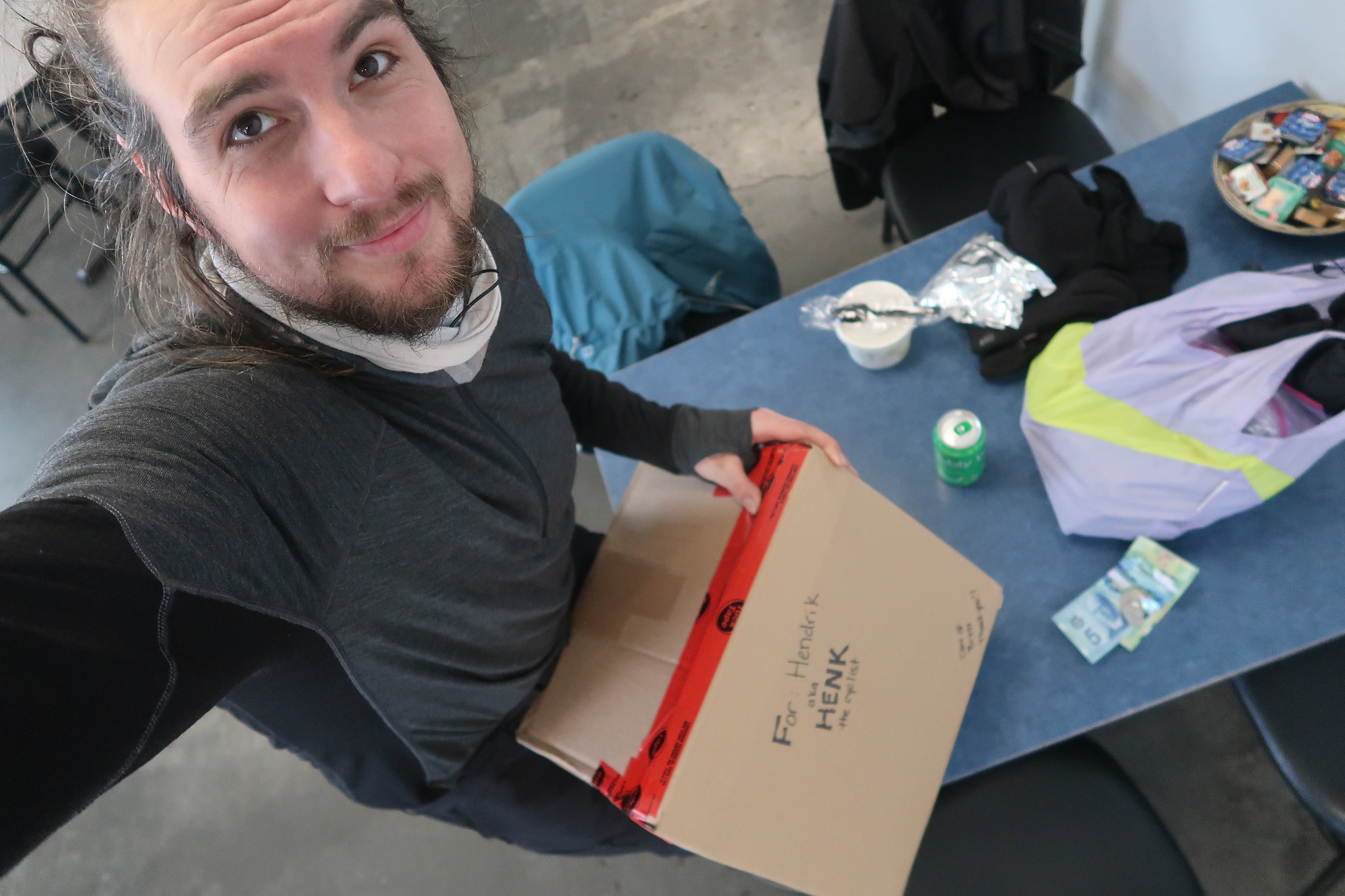 It was filled with everything to get through the week ahead and Kat had put an extra pack of coconut milk powder in it. How lucky I felt to have met them.

There was also a note inside:
“Go Henk go!
a roll of tuck tape inside for you
because it fixes everything!”
Kat & Thomas

People sometimes ask me how I keep myself busy during the long hours on the bike. This is, among other things, by listening to audiobooks and podcasts. It’s a bonus when these books and podcast help me to better understand the areas which I cycle through.

Teslin is a village where I first became acquainted with the indigenous cultures of this region. Five clans are represented in Teslin, which are one of the original inhabitants of Yukon. I was pleasantly surprised that there is a fairly large cultural center in which these clans and their art are represented. 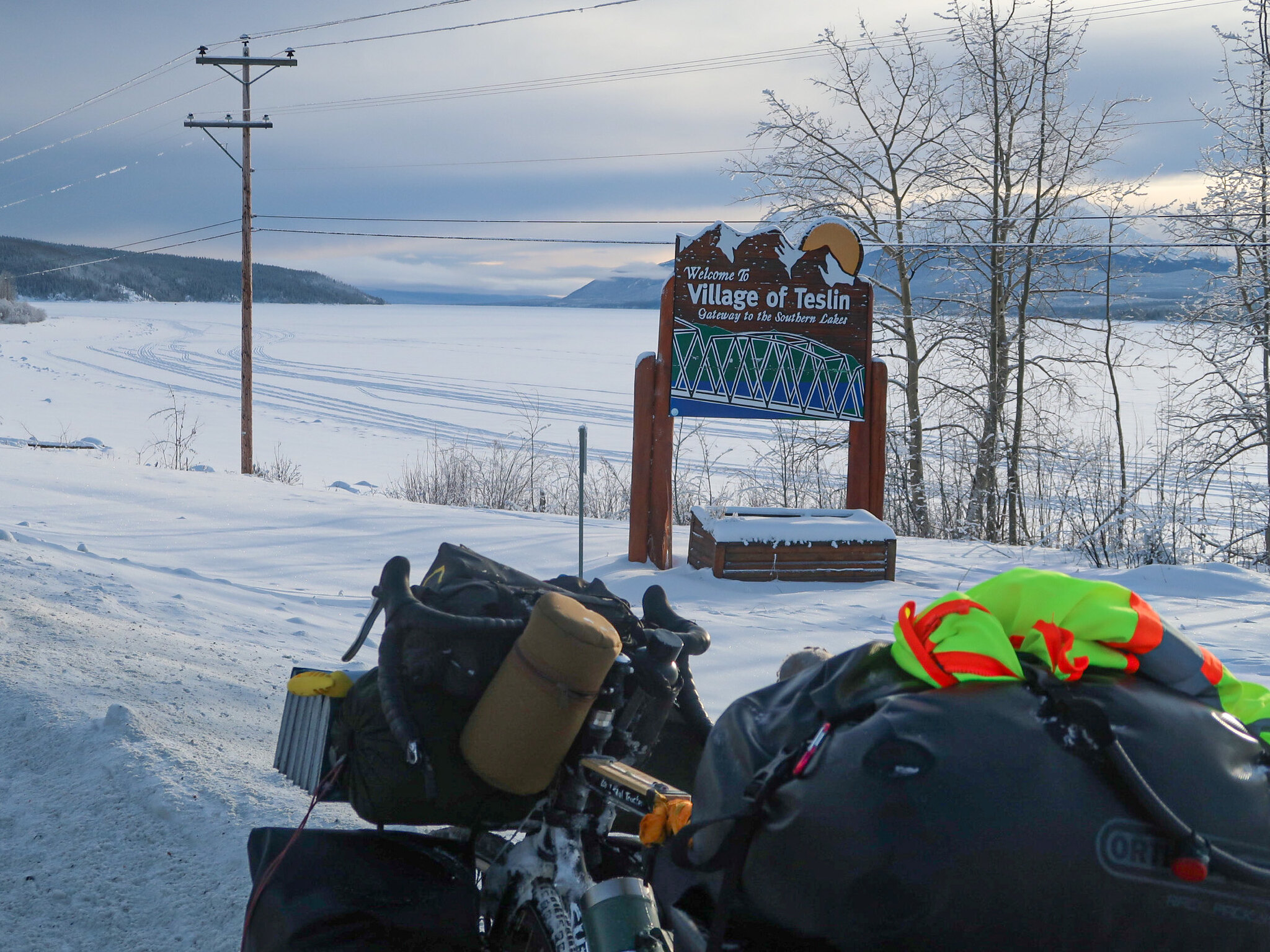 The original inhabitants of Yukon, among others, have fallen victim to a history of cultural erasure by settlers. History tells that with the colonization of Canada their land was dispossessed and they were often forced to adopt Western culture and language. A very complex process about which much can be said. A fact is that this has caused a lot of trauma and to this day is a relevant discussion in which, fortunately, more and more understanding and connection is emerging. An inspirational person to me who does important work in the context of healing from trauma is Vancouver-based Dr. Gabor Maté.

In addition to music and fun, more light entertaining podcasts, I also often delve into more serious topics. For example, I listen to the audiobook The myth of normal, a book written by Dr. Gabor Maté that gives an in-depth look at the subject of trauma. I also follow the podcast Sounds of SAND which is about the interface between science and spirituality. The Sounds of SAND podcast features people who play an important role in the healing from trauma of First Nation communities in Canada and other areas in North America.