Curiosity brought you here: Home › Adventures › Cycling from Rotterdam to Singapore (2015) › Europe › The benefits of traveling without a plan

“Where you from!?”, asked a Macedonian road worker who looked fascinated at my bike. “Hollanda”, I said proudly. Because in some way it seems to be beyond impressive that I come from this small, rich, efficient and flat little country. “You sleep there?”, he asked, pointing to the spot where I just came walking from and where I had put my tent yesterday just before dark. “Yep,” I nodded.

The other road workers gathered around me. They now were all looking fascinated to my second bike like it was a Ferrari. At those times I just start talking in some way. After explaining that I wanted to cycle in a few months to Singapore one of them asked me: “completa?”. I understood nothing of what he was trying to say but after some hand gestures I understood. I proudly said: “3500 euro including all!” With the thought that I might inspire him to save that money, pick a second hand bike from somewhere and cycle the world.

Because yes, that’s not a lot of money people told me in the Netherlands. 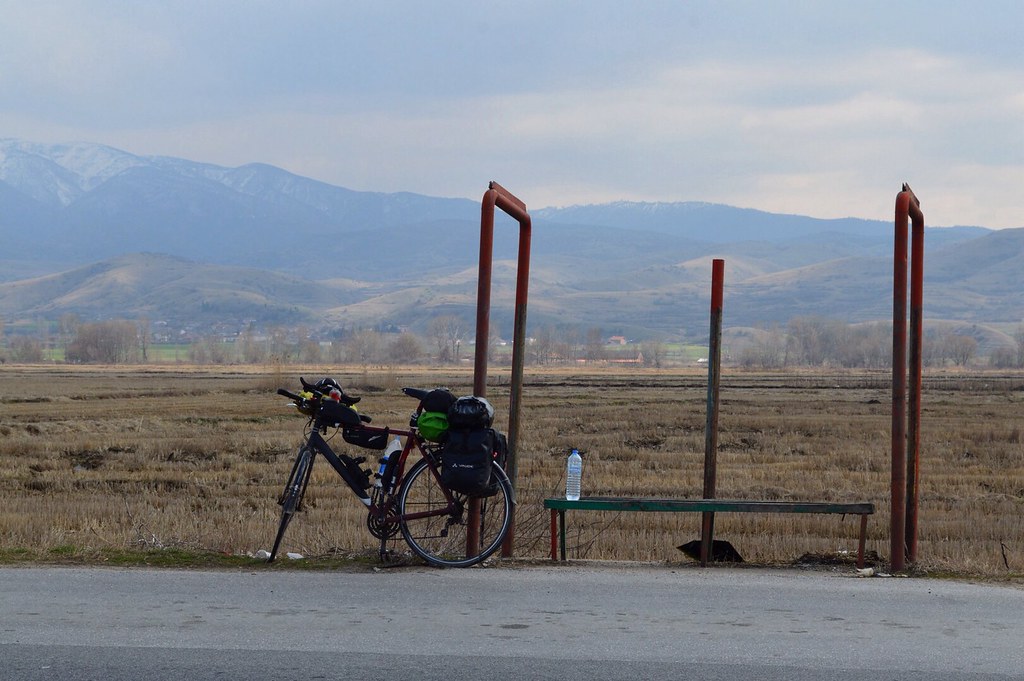 Later on when I was cycling again I thought about the little conversation with the road worker. What really stupid to think that I could inspire him. Firstly that 3500 euro is for him at least a year’s salary and secondly he would never could pass all borders as easily as I can do that. The only thing I’ve probably done is made someone jealous.

I am privileged from the fact where I was born, where I come from. It makes it a lot easier to make this journey, for him, in his situation, it would be much harder to take that step. 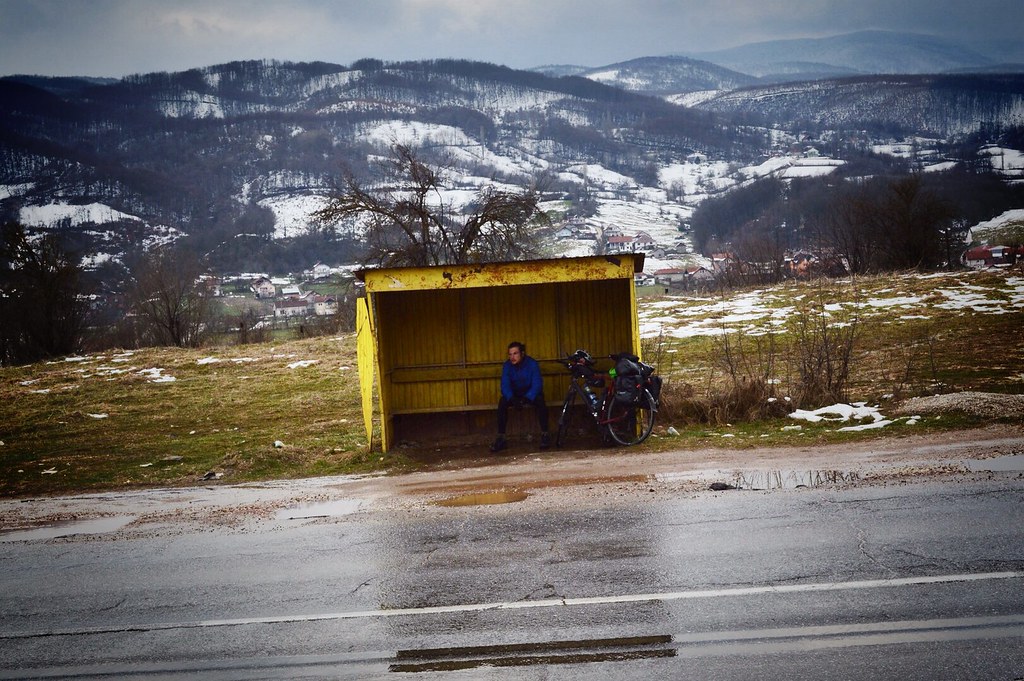 With an empty wallet I crossed the border into Kosovo through some very friendly Kosovo customs and was happy that I could cycle quickly into the city Gjakovë where I could refill my food and drinks supplies. In the following three days, while traversing Kosovo, I’ve noticed very little of the departing residents in Kosovo. The thing I noticed was that the now independent country has a rich history. Abandoned buildings and painted road signs speak for themselves.

Here you can see that in addition to the Albanian indication, the Serbian indication of a village is made invisible. 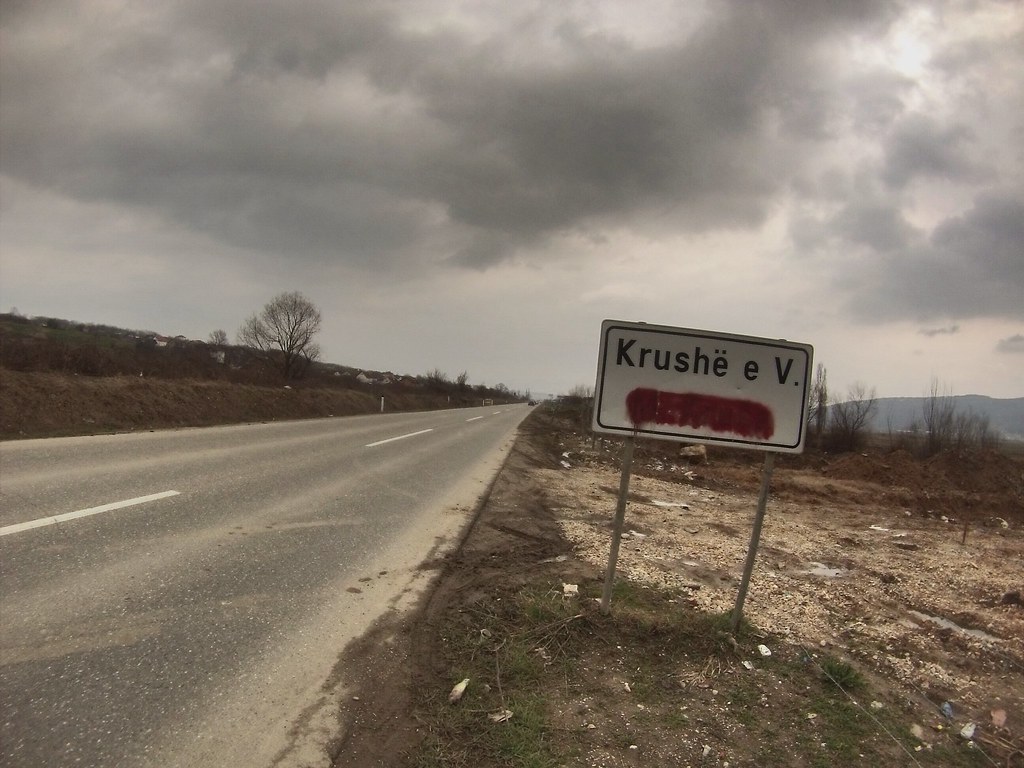 As I’m doing in every country, I made a stop in Kosovo at one of the stations for a cup of coffee. Jammed inside I started to feel uncomfortable by the staring of three Kosovo people. After ordering an espresso, I wanted to pay with a bill of 50 euros. It soon turned out that 50 euros was the total amount of cash in the cash register. I felt rude, even more uncomfortable by the staring Kosovo people and my western behavior to pay a cup of coffee which cost 40 cents with an impossible amount of money.

The owner then started talking to the three Kosovo people in a way that I thought there was about to happen something strange. And that happened, the station owner said in a calm tone: “he is paying.” And then pointed to one of the staring Kosovo people who was chewing on a little wooden stick and putting his thumb up with a straight face. I just got the feeling that I was accepted in the wild west. A really strange but good experience. 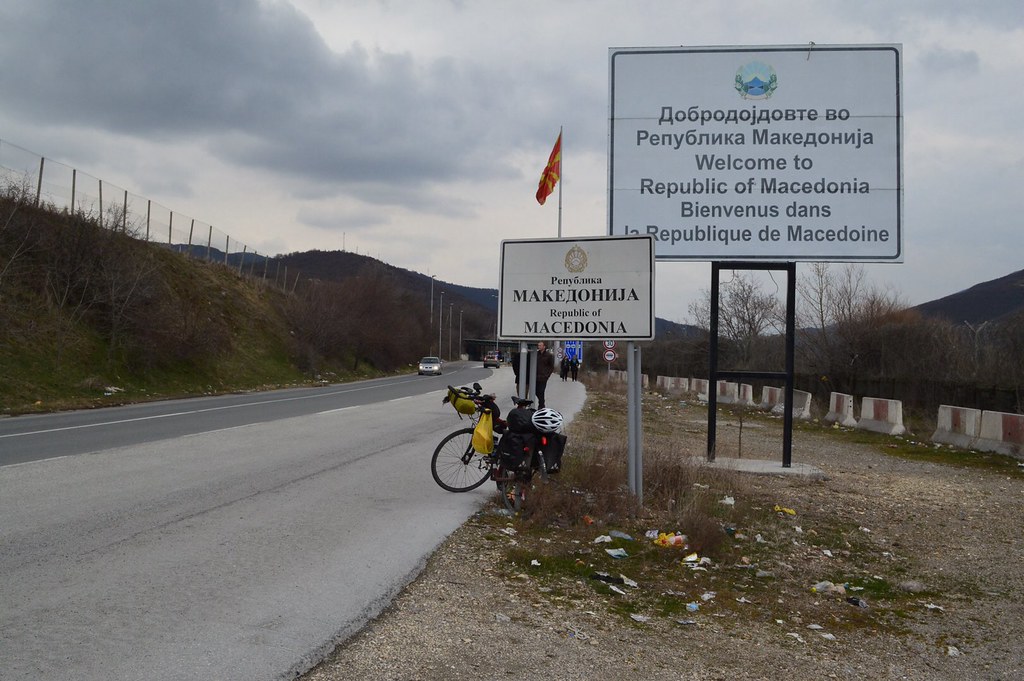 After three days of Kosovo, I cycled into Macedonia. Here my panniers were completely emptied because the gentleman at the customs was convinced that I had at least three kilograms of cocaine hidden somewhere in an impossible place. Arriving in the capital Skopje, I was hosted for two nights by the Unity Hostel in exchange for the watch in the night, which was basically to sleep on the couch in the living room. But Tim, a German guy who was on a city trip on his own, was sleeping there so I was offered a free bed in the shared bedroom.

The rest day I used to visit the beautiful Matka lake in Skopje. 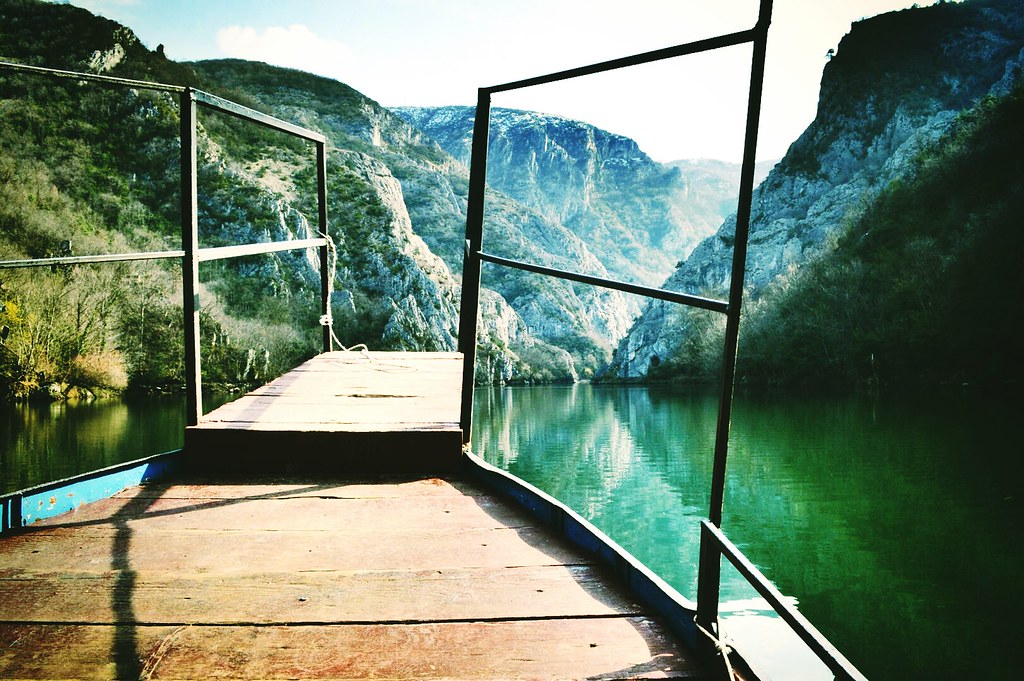 In Matka, one of the boat owners brought us to a cave, where he was cranking an aggregator and lights started to burn in a cave named the Vrelocave. 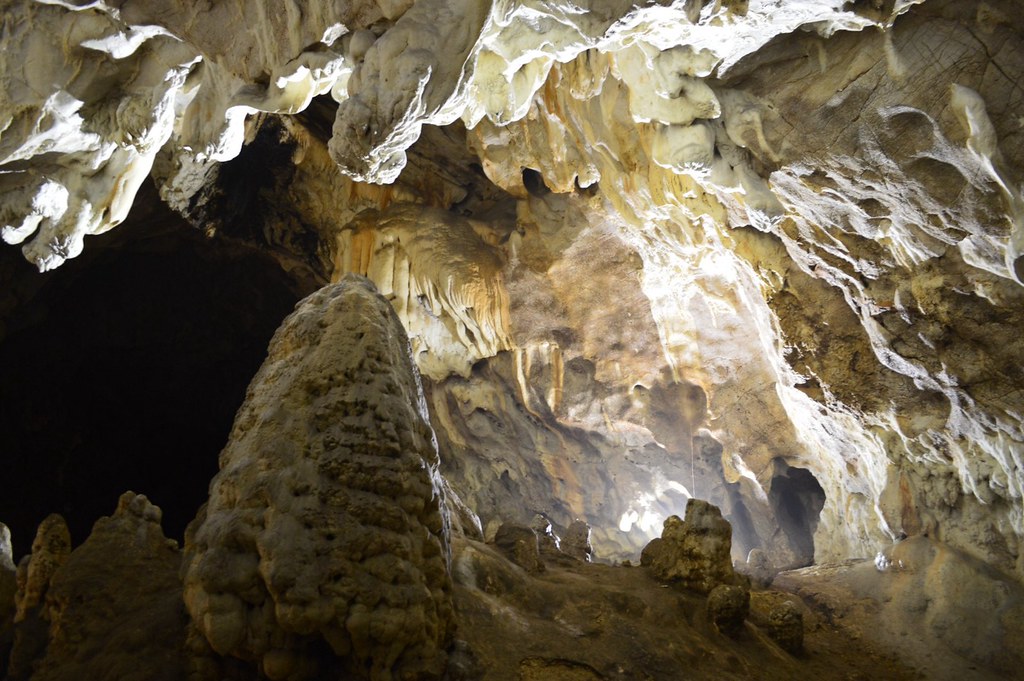 While writing this article, I just arrived in Sofia in Bulgaria. I am here hosted by friends of someone I met three years ago during a train journey through Eastern Europe. I found out that I need these moments of few rest days in a city, to have some people around me and socialize with them. Share cultural differences and travel experiences. It feels nice to tell somebody the adventures of the trip, it also helps to write it down here.

When I get back on my bike than I enjoy the challenge, simplicity and nature of the journey. Accompanied by the spontaneous adventures, which I repeatedly share in my articles, makes the journey complete.

If you look at my original schedule you see that I’m totally deviated from the ‘planned’ route through Romania for example. I try as less as possible stick to a schedule and let myself guide through the local people I meet. Often stops in cities are the moments where I get one after another tip of what I can do. Off course, I follow my way to Singapore and that is the end destination but I notice from myself that traveling with a tight schedule can be really frustrating and distracting me from the real enjoyment. Being in the moment and enjoy what’s happening around me. To share, meet new people and experience talks and humor.

I believe this is the essence of travel. 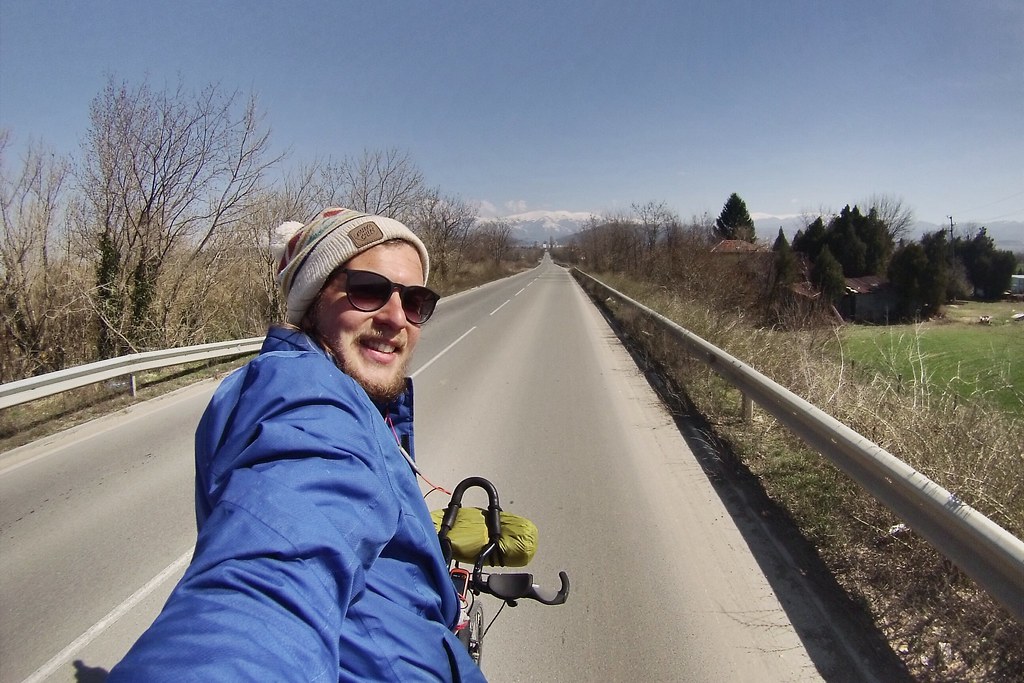 I’m happy because I’m almost in Istanbul. My feeling is that there the adventure is about to really begin.