With a sigh, I sit down against an immense building. It is white and edged with gold. The whole area here is looking very expensive, streets full of big shiny white golden buildings and street lights shining in the same style. I ended up in the wealthiest district of Ashgabat in Turkmenistan. I’ve just been told in this large building that I can not withdraw any money with my mastercard. I look sadly at my hand. My last three dollars, I exchanged it for 10 manat, the Turkmen currency. Here I can buy a total of 10 bottles of water from. I once more got into a challenging position. My bike is in bad shape. My right arm hurts because of a wound. The next five days I have to go cycle for more then 600 kilometers from Ashgabat to Turkmenabat.

How on earth I’m going to ever survive without any money? 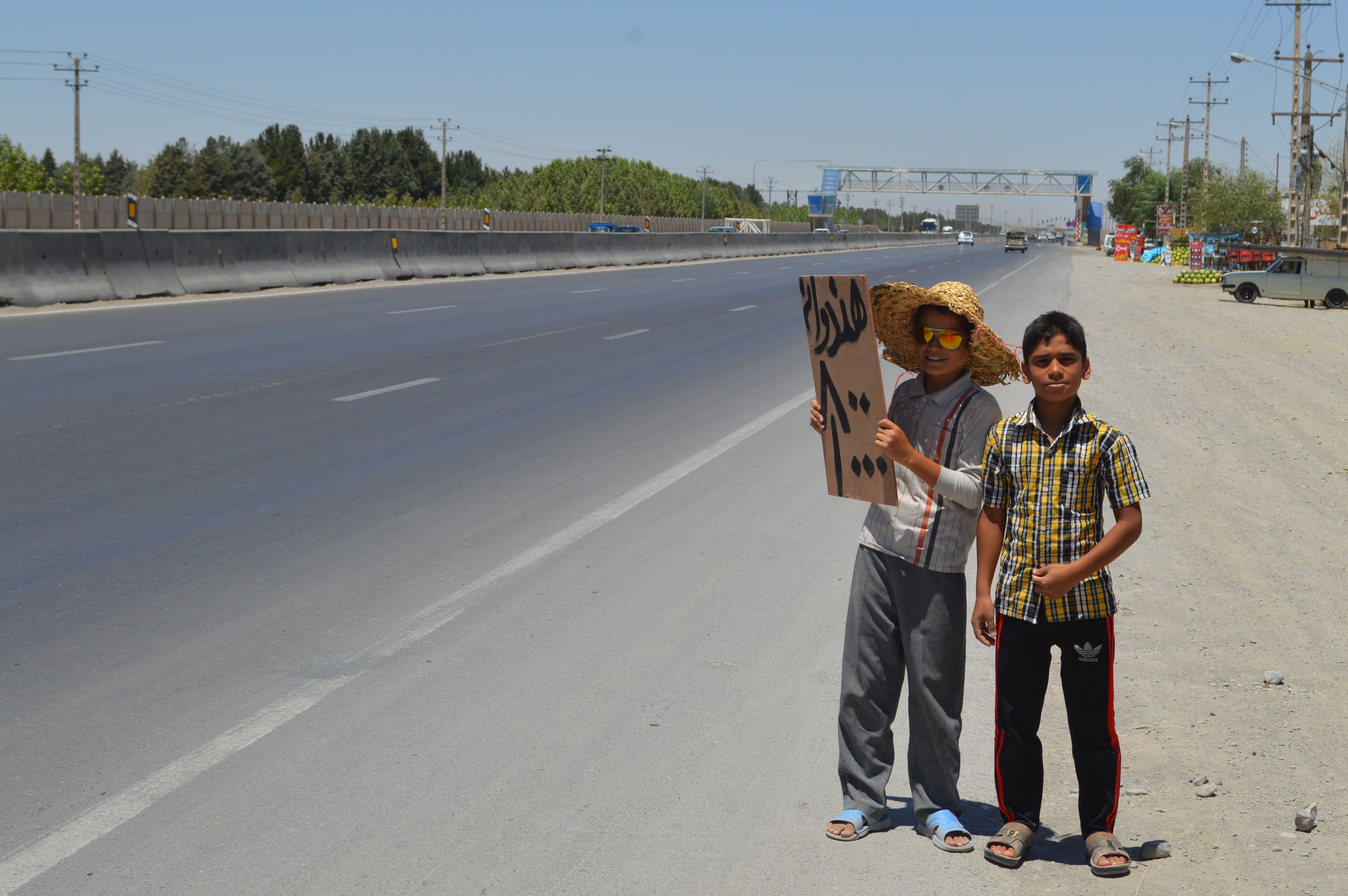 In Mashhad I managed to find my friend riding on clogs. Ritzo came suddenly walking into the guesthouse where I stayed in Mashhad. By word of mouth, he had heard that I stayed here. Incredibly that we succeeded in finding each other. We both had our transit visa already picked up at the Embassy of Turkmenistan in Mashhad. Proudly we showed that visa to each other. We went to leave the 7th of July to go from the 9th of July to the 13th of July along the 550 kilometer road cycling through the desert of Turkmenistan. 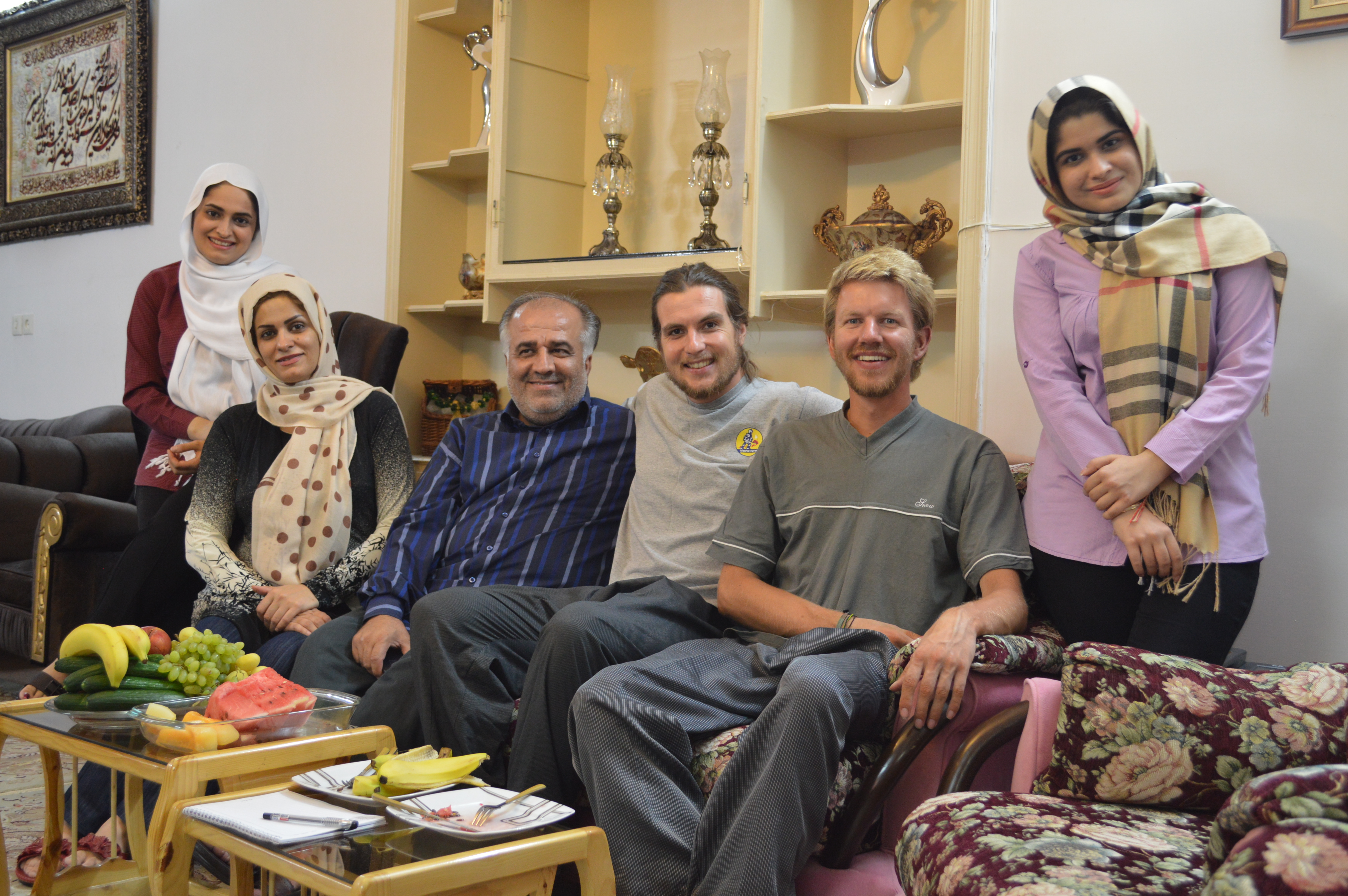 We looked more closely at the places where we had to go in and out. To my suprise I saw in Ritzo his visa the entry point Sarakhs and in my visa the entry point Howdan. These are two totally different border entries. Howdan is about 200 kilometers north from the Sarakhs border entry. A detour of at least 400 kilometer! My heart sank into my shoes.

We agreed to meet in Turkmenistan, the 9th of July at 8:00pm at a train station in Tejen, really in the middle of nowhere. We both had no cell phone. This could be very exciting. On the 7th of July we left for Turkmenistan, unfortunately both a different route, but both to the border for a big challenge.

Thus began the most bizarre days of my trip so far.

The second day cycling I met a nice group of Iranian friends after 50 kilometers from Quchan. They were secretly drinking beers in the mountains. I drank a glass, and then I hung a bit on their car up a mountain. I know, sometimes I just take too much risk. It went wrong. A boy in the car thought the would help me with grabbing my bike and at 40 km/h it went wrong really bad. There I sat down with my arm punctured and a grand slam in my rear wheel.

The rest went fast. Back to Quchan to make things right. They felt pretty guilty. I soon got a fixed wheel, a meal and later that evening I was dropped off at the border of Turkmenistan. I was totally confused, what was happening to me?

The next morning it was the time, to cross the border from Iran to Turkmenistan. With my remaining 35 dollars I did not get so far. At the border I had to pay inexplicably 12 dollars. Immediately afterwards I had to take a metro bus because the first 35 kilometers is a protected area. That costed me 25 dollars but I knew to bargain it to 20 dollars. I still had a nice three dollars remaining in my pocket

Now I sit here knowing that this is really my only money for Turkmenistan. My only hope is Ritzo, but how would I ever get into Tejen tonight on time, that was 210 kilometers!

I grab my bike and ride out of the town Ashgabat. After 70 kilometers, my water supplies run out. It’s too hot. I decide to take a ride. It really concerns my that otherwise I fail in crossing this country in five days. I fail in meeting Ritzo. I would fail in about everything because I had no money anymore. A car stops and a kind man takes me 140 kilometers to Tejen. Finally, as I step out the car the man ask me to my amazement for money. No! Turns out to be a taxi! I offer my 10 manat apologetic and try to make him understand that this really is all the money I have with me. And how can I ever know that he is a taxi driver?

Later it turns out that in these countries a lot of people are trying to earn money like this.

Later that evening I met an exhausted Ritzo while I’ve been helped with water by two policemen. We made it ones again to meet each other in the middle of nowhere. We are glad to see each other and quickly search for a camping spot. Not much later, the immigration police pops up in front of us to send us to a hotel. We refuse and say we’re going to cycle to Mary. A town 120 kilometers away. After insisting it badly they accept and we sit at 1:00am in the night back on our bikes. If we later are invited by the traffic police for a place to sleep we are a bit confused.

The following days we cycle together through the 250-kilometer desert from Mary to Turkmenabat. A great ride with occasional wild camels. Water is our biggest concern, but fortunately there are plenty of ways to regulate water. 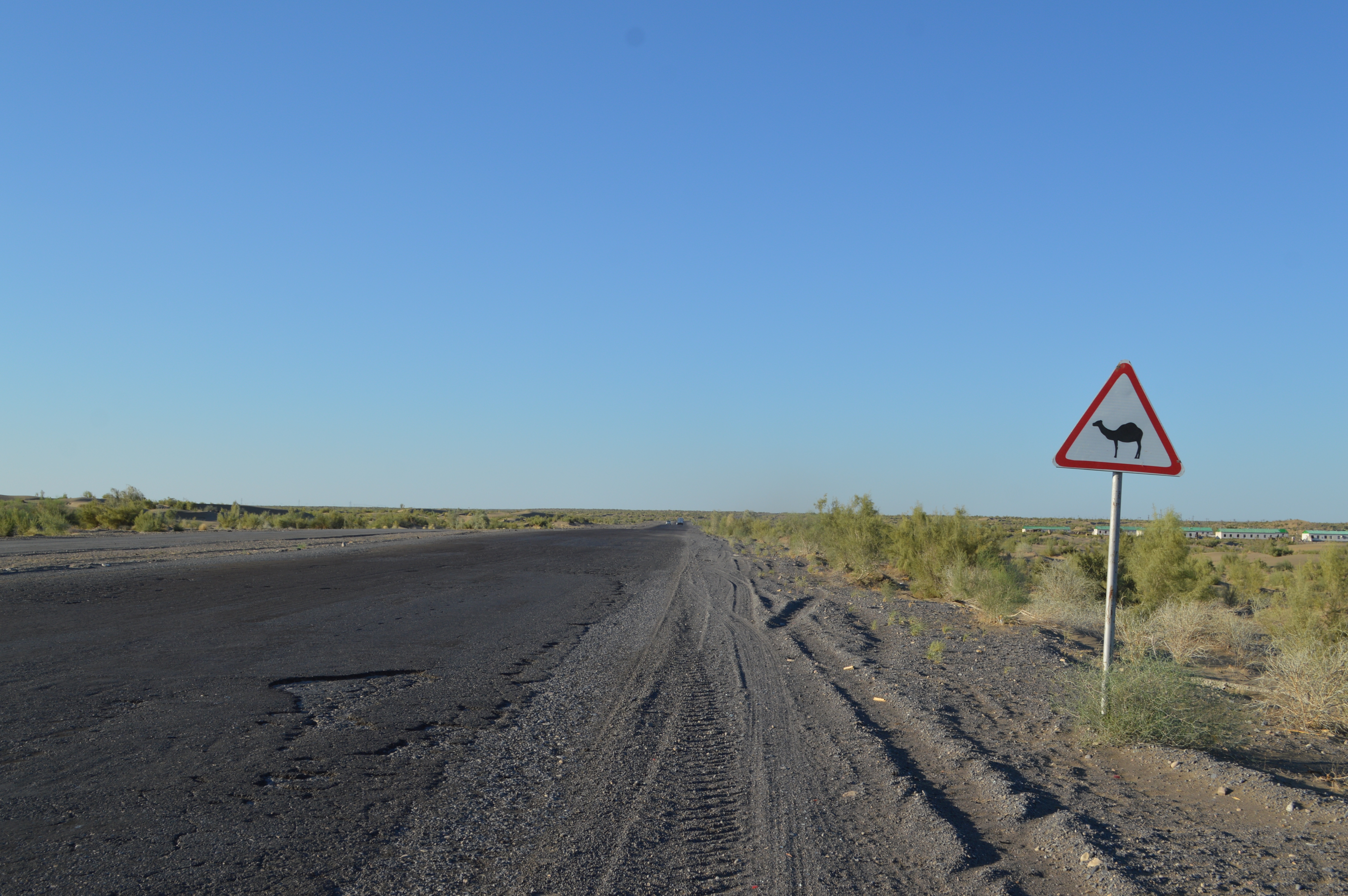 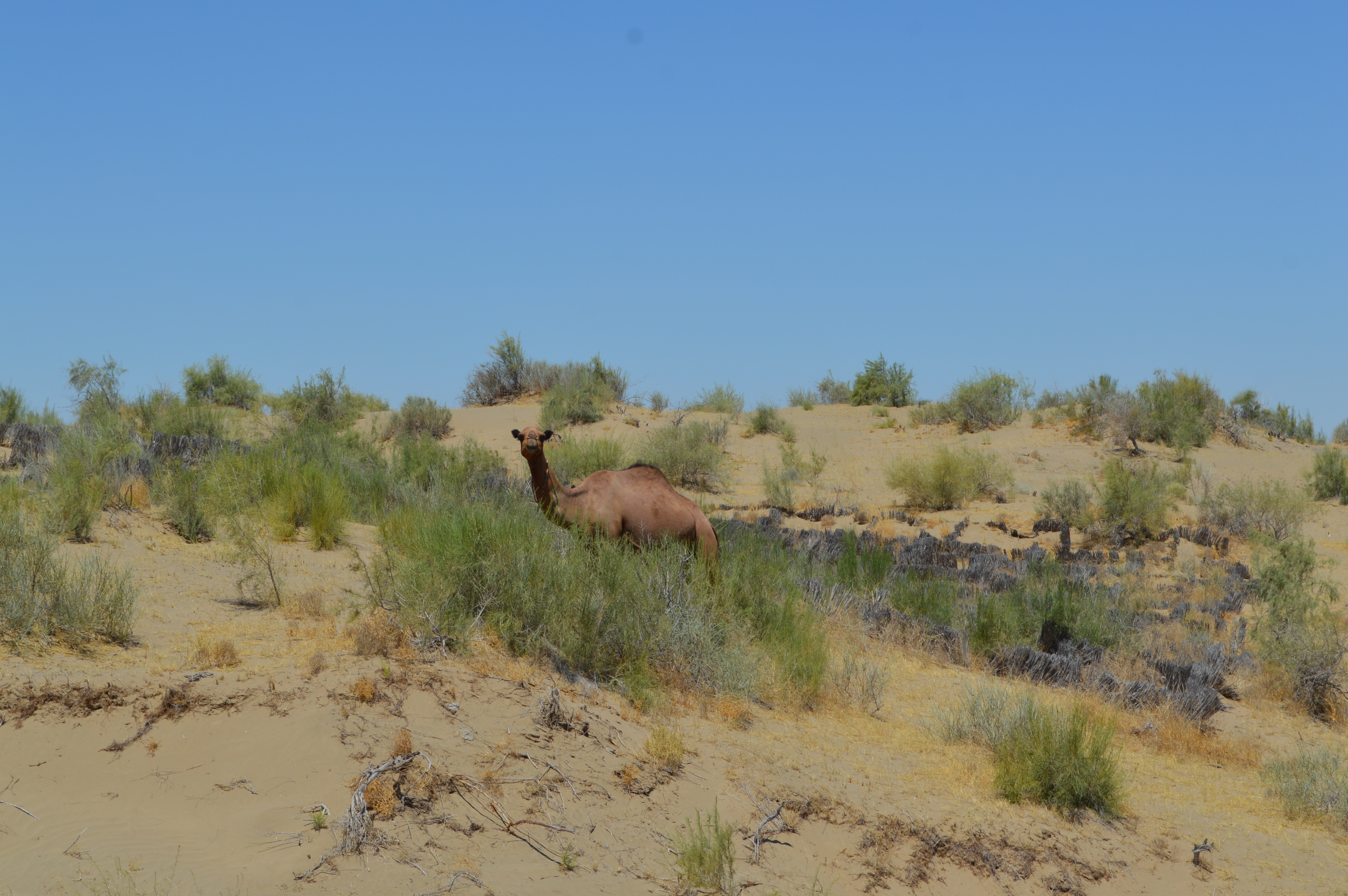 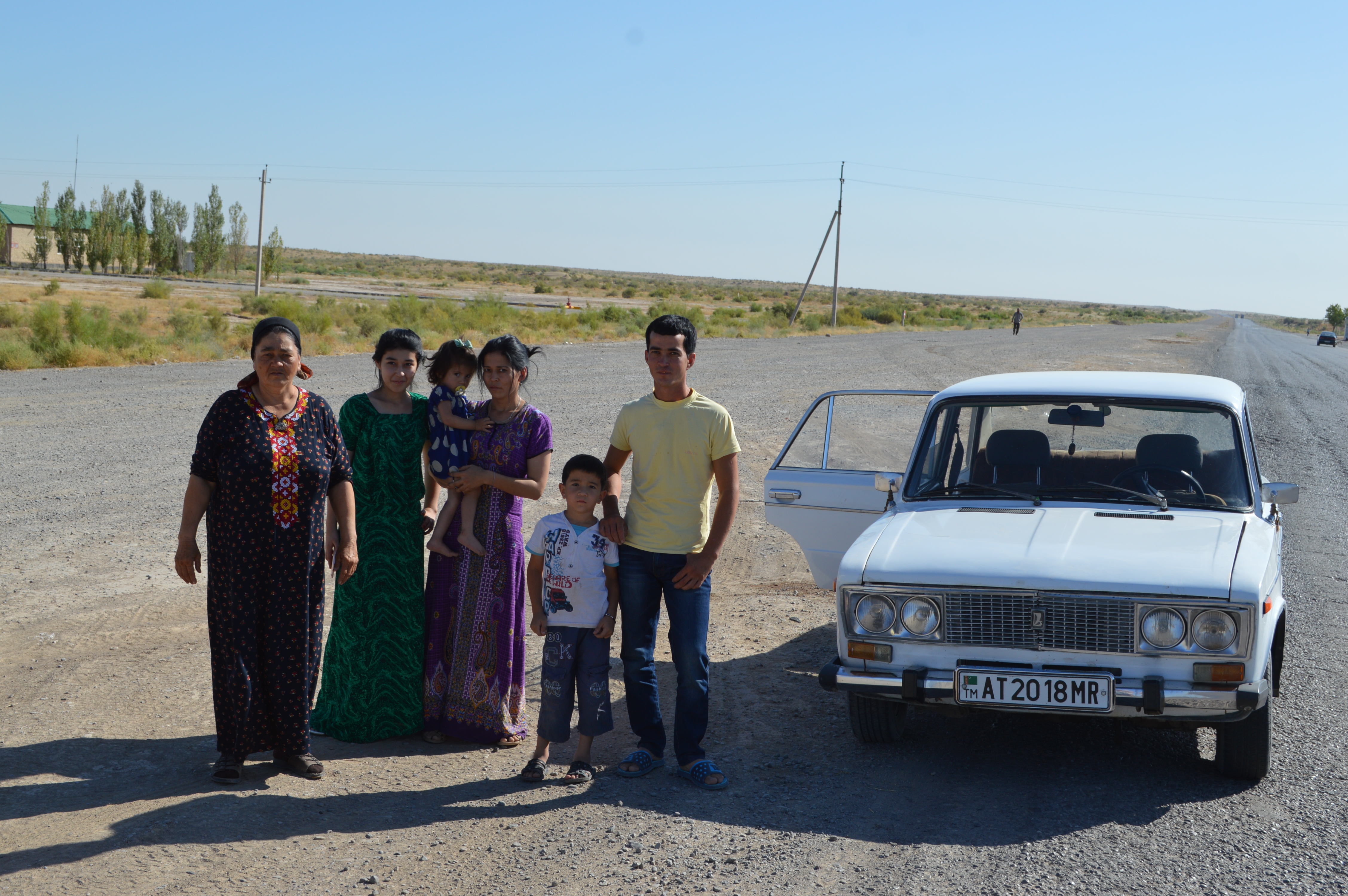 With a little bit of energy left we get on the 13th of July after five long days and 550 kilometers at the border with Uzbekistan.

We succeeded. We found each other and survived this little piece of desert together. Probably the most challenging part of this trip. A country where we still have serious questions about. We give each other a hug and walk to the border of Uzbekistan. A new country with new adventures.

Fortunately, we can stay here for 15 days.