It’s not so long ago that I arrived at the airport in the Netherlands from my bicycle journey from Rotterdam to Singapore. I’m ready again. With my bike packed with a tent, a sleeping mat and a sleeping bag. I’m going out again. I can’t resist it. It itches. No, let me be honest. I want to visit my friend Erwin in Groningen and I have no money for a train ticket. I’m going to cycle the 250 kilometer from my hometown to the city Groningen.

I look outside, today is such a day. It’s raining heavily. Is this stopping me from going out? I don’t think so. I put my thoughts in the wise sayings of adventurers who have ventured out to the Mount Everest: there is no bad weather there is only bad preparation.

Well, here I am. And I tell you, there is such a thing as bad weather. The online radar shows that it is going to rain the whole day. Well, I gotta go. Now or never. So I jump on my bike and cycle in the pouring rain out of my street.

Exactly six months ago, when I stood with my bicycle in between a lot of sand in the Taklamakan Desert in China, I got an email. 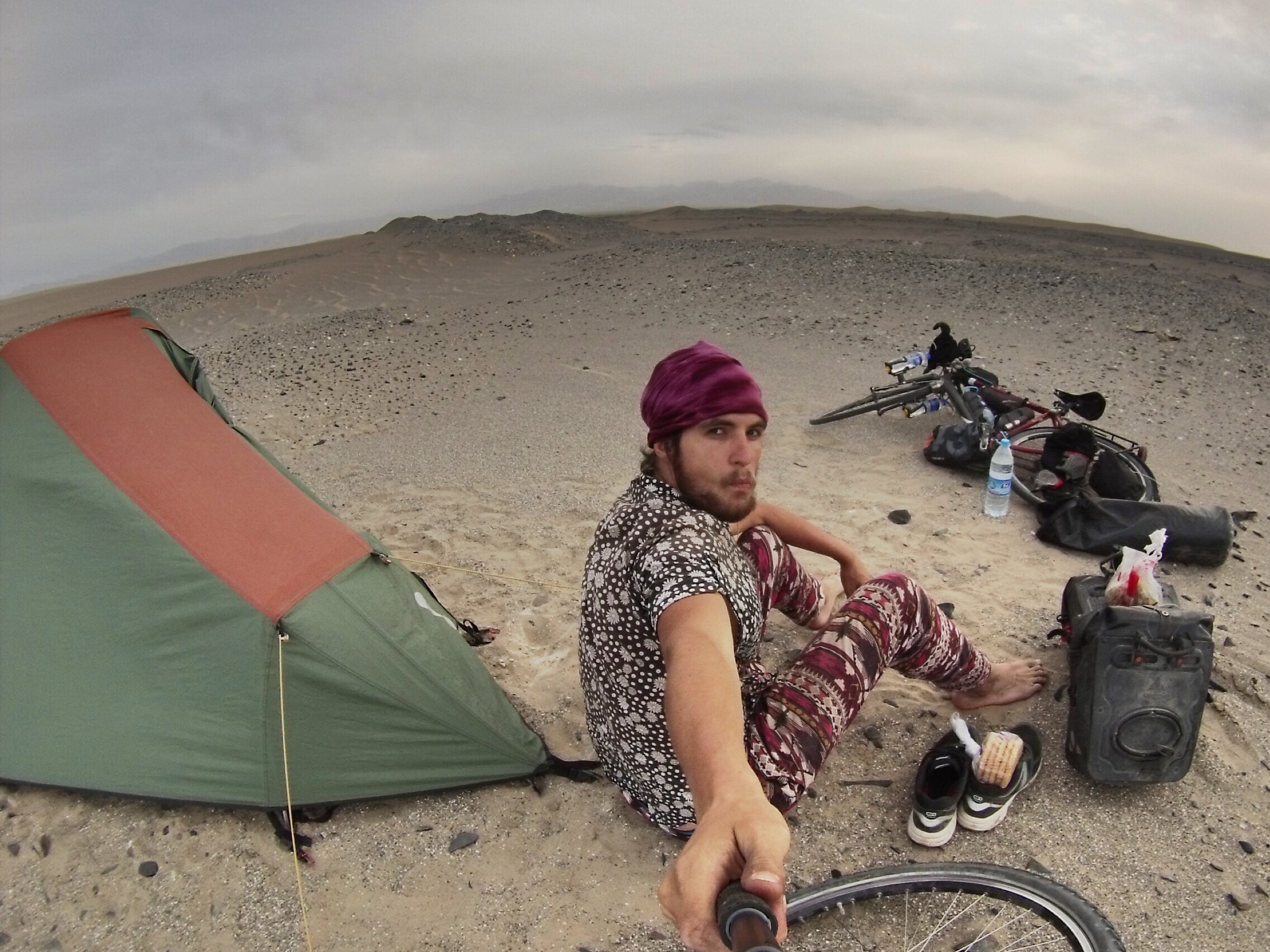 It began with this sentence: “It is with great pleasure that I have read all your blogs. I was a bit bored with my job so I had plenty of time to do that.” Promising, but that certainly was not his whole message. It went down as follows: “I’m about a year behind on your adventure because I have decided to cycle to Kyrgyzstan in February.”

And so I met with Daniel in an email conversation.

Six months, a flight and 21 e-mails later, I sent out a message to Daniel that I was going to cycle to Groningen. Visiting my friend Erwin. Daniel meanwhile departed the following week with his friend Eric to attempt to cycle to Kyrgyzstan. “You can cycle to me and have a nice warm shower and good food and a warm bed if you want.”

And so I actually was going to meet Daniel in real life.

On my way to Daniel it wasn’t that funny. It was raining really hard. Good preparation I’d never really had. That is why in that afternoon I was sitting in The Döner Company in the Central Station of Utrecht, close beside a large meat roll on a skewer. Shivering from the cold. My clothes were soaked. Completely. The more than three hours of cycling had taken its toll. After a long battle and with a little fraud on a train I arrived at nightfall at the house of Daniel. Glad that I finally could warm myself. My legs tingled and my feet I simply didn’t felt them anymore. Fortunately Daniel was friendly and welcoming. He putted me immediately with a glass of whiskey under a warm shower.

The next day we left with his friend Eric on a little cycling trip to the north. Soon we were cycling through the beautiful countryside of the Veluwe. Also, it began to rain again. We decided in a little town called t’Harde that we were going to camp somewhere in the Veluwe. And so we sat back at a cozy campfire with each other that night.

What for me felt like a passed year that flashed by, was about to begin for these guys. In the upcoming week was the date that they were going to leave for their big trip. Daniel has quite his job for this trip. He has a woman he is not going to see for at least 5 months. A familiar story. We celebrated the success of my journey and the start of their journey. It felt good the morning to wake up in the wild again, in the open air. Even though my feet were still cold from the night. 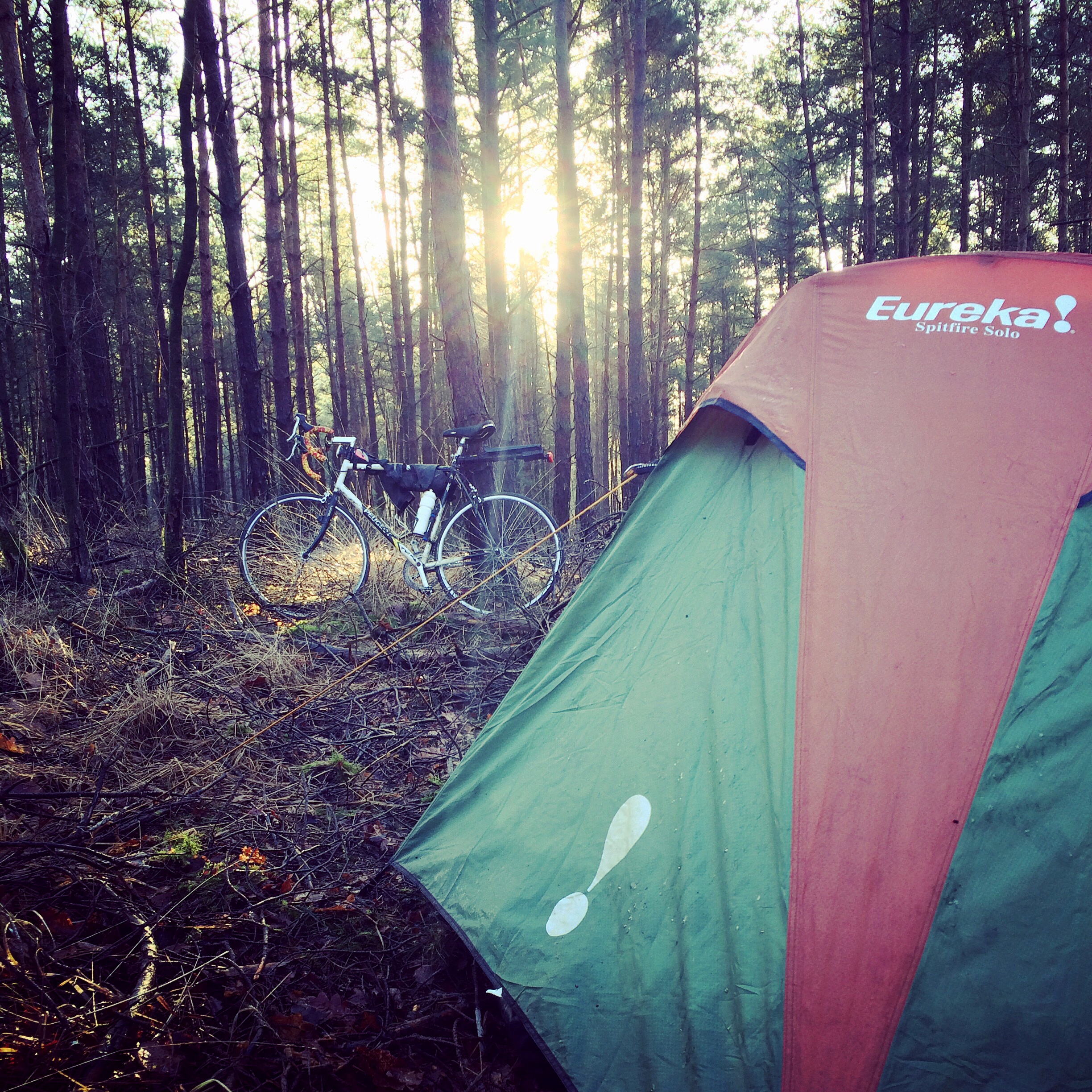 I wished Daniel and Eric all the best and departed further north. To Erwin. Who had to quite his 300 kilometer journey on foot across the border of the province Groningen because of a knee injury. Enough for a good conversation.

And so my journey ended, another one has started. Find here the website of Daniel and Eric which is unfortunatly in Dutch language. At this time they are cycling from Italy into the Balkans, with destination Kyrgyzstan. They sleep together in a tent and I wonder how long they are surviving that!