It was my stupid need to get in Slovenia as soon as possible. The route through the Brenner Pass was not planned and I therefore had no maps of Italy on my navigation. A nice English speaking Italian boy had written a couple of towns on a piece of paper leading me the fastest way to Slovenia. Not knowing that this route was through the mountains and along the Austrian border, I followed his advice. 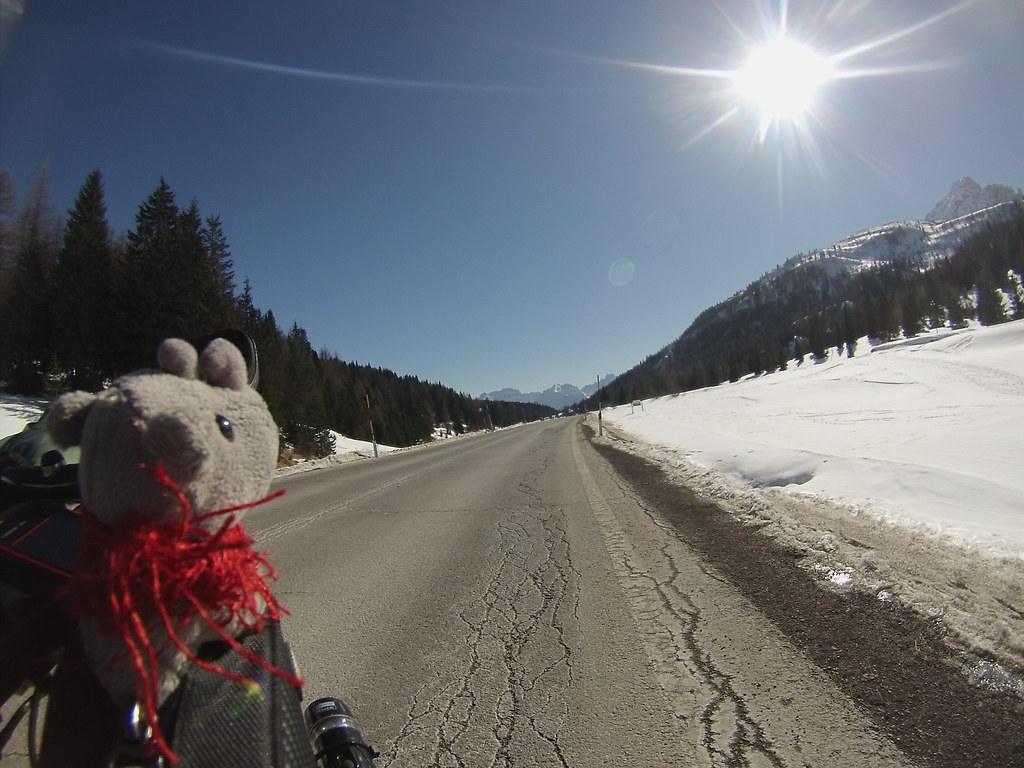 I would do wild camping to at least Slovenia because I had spend too much money in Innsbruck. Well before dark I saw a sign with the high of 1,500 meters and after another hour of climbing I was way up into a big mountain called Monte Croce. I still remember the Brenner Pass, which was not nearly as severe. The snow here was immense, at least 50 centimeters high! When it started to get dark I knew it, this could be the coldest night of my entire cycle-tour to Singapore.

In a McDonald’s at Innsbruck I had an emergency pickup at 8:00pm by Logan. Logan is a very entertaining French guy at my age living in Innsbruck for a while to enjoy the town itself and the many ski resorts around it. My schedule was to get a day rest and then go right back on the bike. This became a three day break because of a scheduled day snowboarding and a day celebrating carnival with Logan. I could stay with him until my departure, first on a mattress in the hallway, because his mother was visiting him. Later he even insisted (!) that I could use his room when he was taking his mom back to Munich and stayed for one night there. 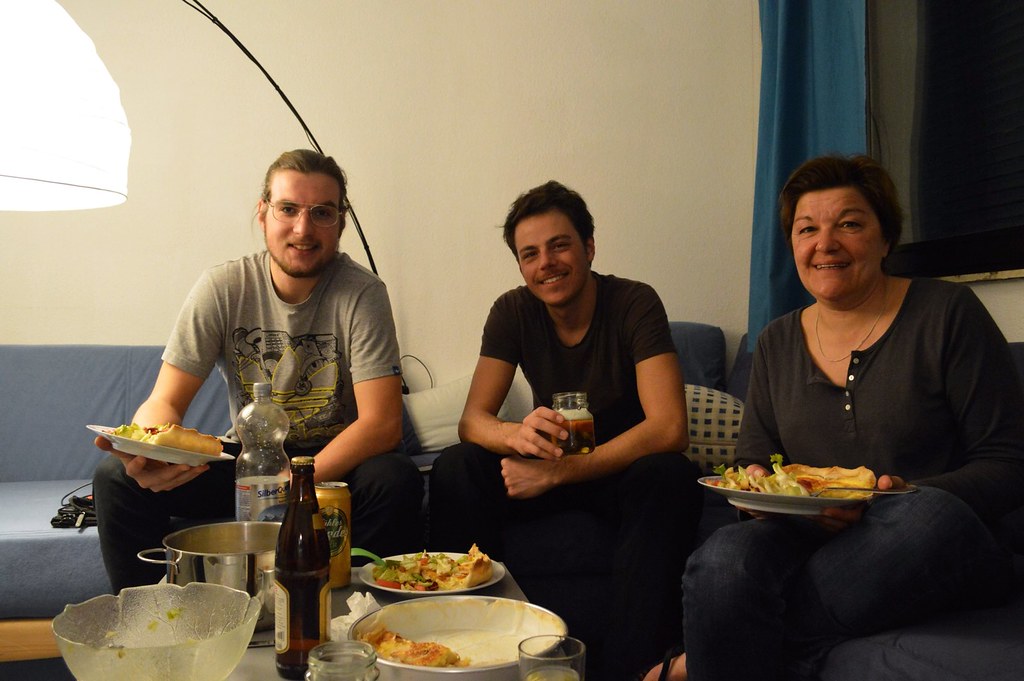 Snowboarding was going badly. It had been three years ago and my back was hurting after doing it again. By just sitting it also was pretty amazing. 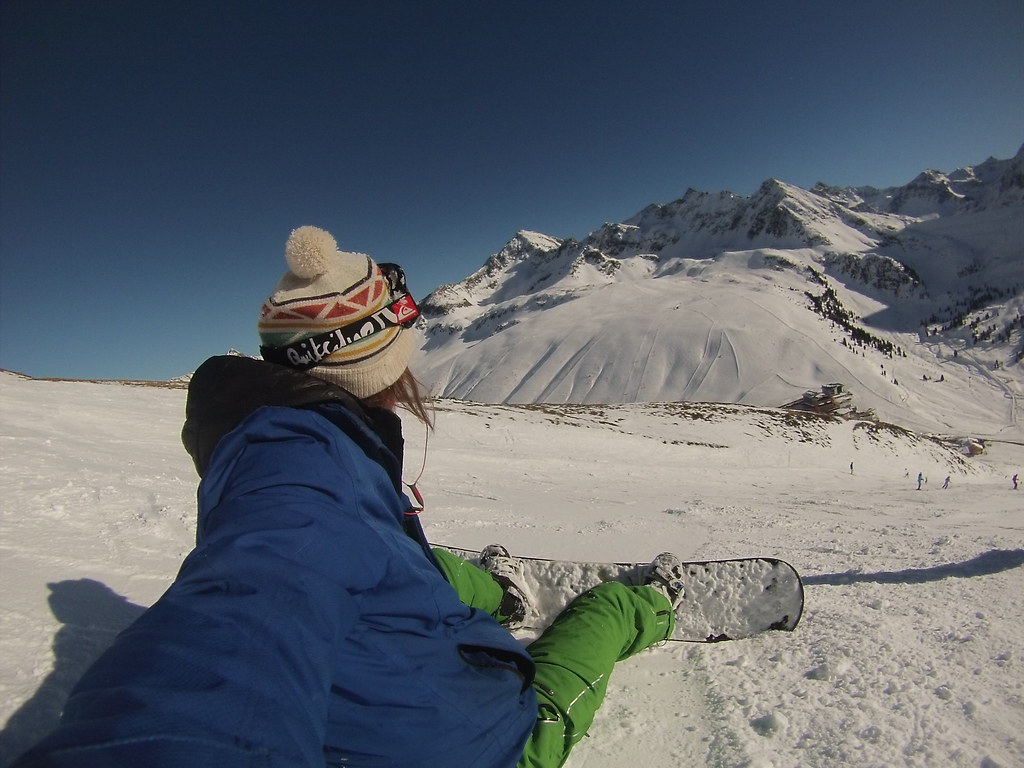 The next day there was carnival in the city. Everything Logan could find in his room what looked like fun we used to make us look ridiculous stupid. 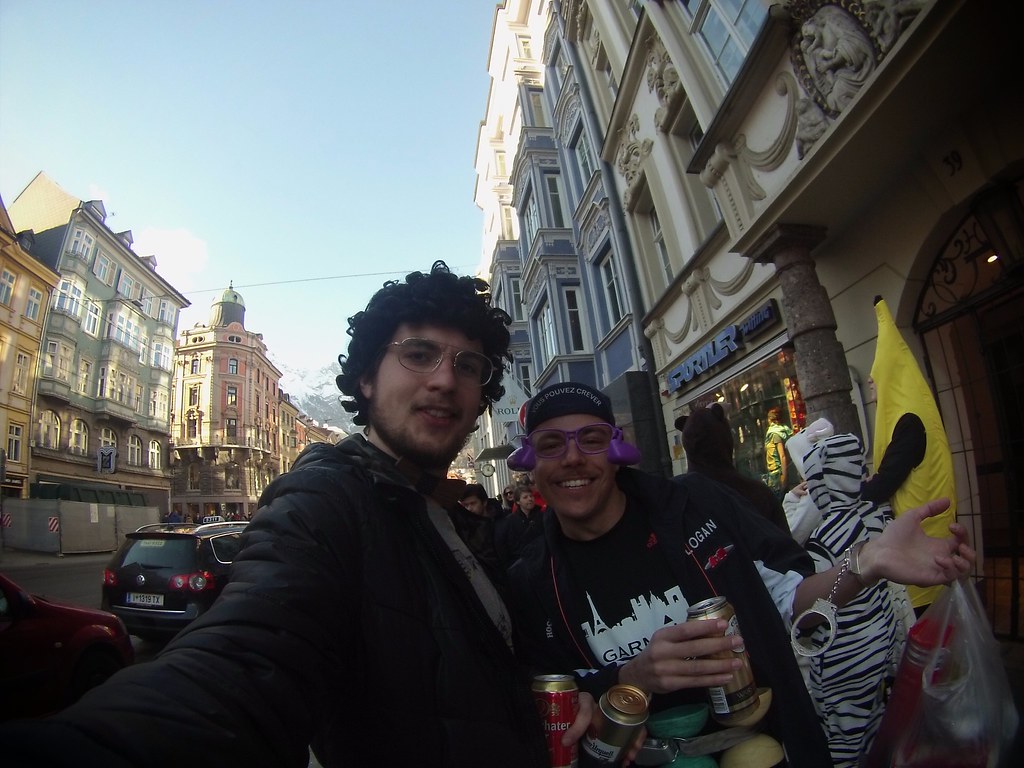 The day started early so we could end it also early because the next day I was going to cycle the Brenner Pass. Because of all scaring reactions from people that I was doing this in winter, I was prepared for the worst. Packed with energy bars, three liters of water and all the rest of carbohydrates I started the climb. Turned out that the climb was ten kilometers and the rest was just going down into Italy. Cycling the Brenner Pass was not that heavy. Ringo found it more impressive to completely walk the mega outdoor outlet in Brenner. 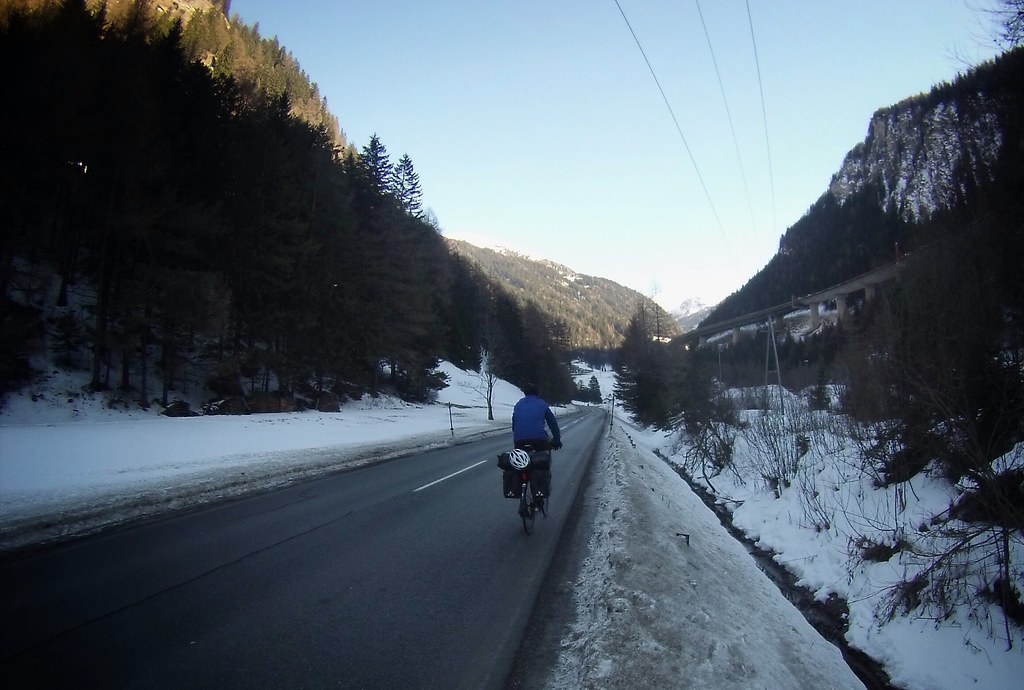 Was it really going to happen? Camping in a layer of 50 centimeters of snow? I hesitated as I was high in the Monte Croce, but decided to take the challenge. At 6:00pm I ducked into a dark snowy side road to find some place for my tent in the 50 centimeters of snow. I had to walk very careful because every misstep would get me half a meter lower. It took a while before my tent was set up but the result was amazing! 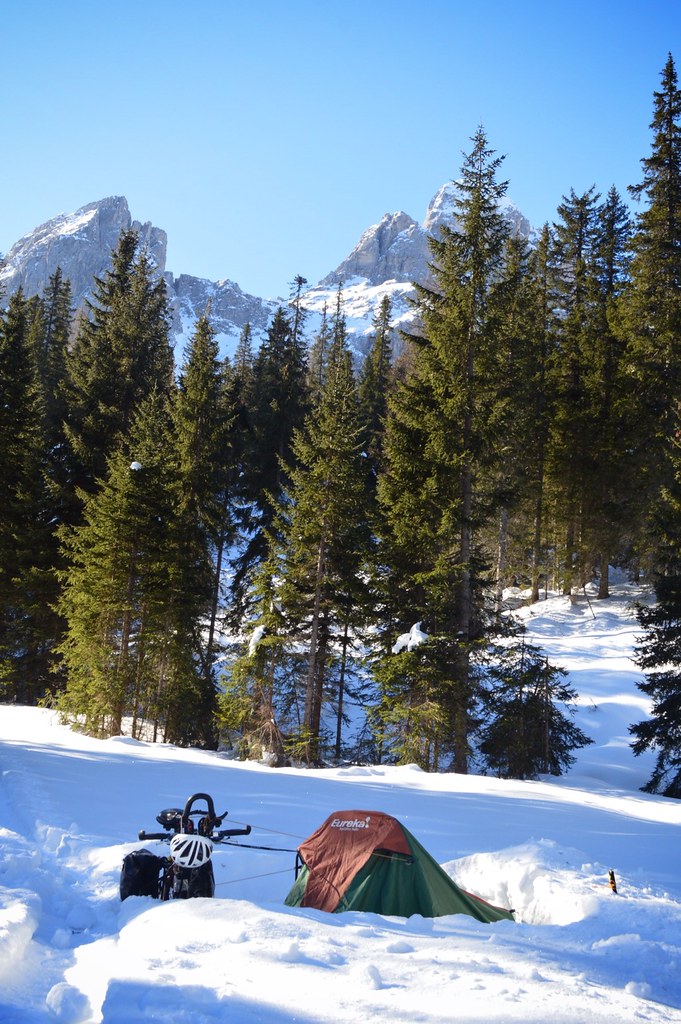 The next day I began a descent of 50 kilometers. I love Italy! The country, the beauty of the mountains and old people which are doing small talk on the street corners for hours with heavy body language. Next to a small bar, where I just had a coffee and a sandwich an old guy came to me asking: “Parlare Italiano?”. “No,” I said as I looked at him kindly. The man looked at me confused and started to just continue talking in Italian. I nodded what, and at one point he looked at me quizzically: “Collone Germany?” I had no idea what he meant and replied: “No, collone Olanda.” The story went on and after a questioning look, he asked something like: “Capisco?”. I could tell from his body language that he was indeed wondering if I even understood some of what he said. “No parlare Italiano”, I said again with a smile. And at that moment he realized that I really did understand nothing of his Italian words. I could only find it very cute as I was enjoyed by his Italian accent. It is so charming.

I enjoy every social contact I have even if we can’t understand each other. Sometimes someone press the horn at me, open his window and shout: “Bravo, bravo!!”. Yes indeed, Italy is a cycle country. 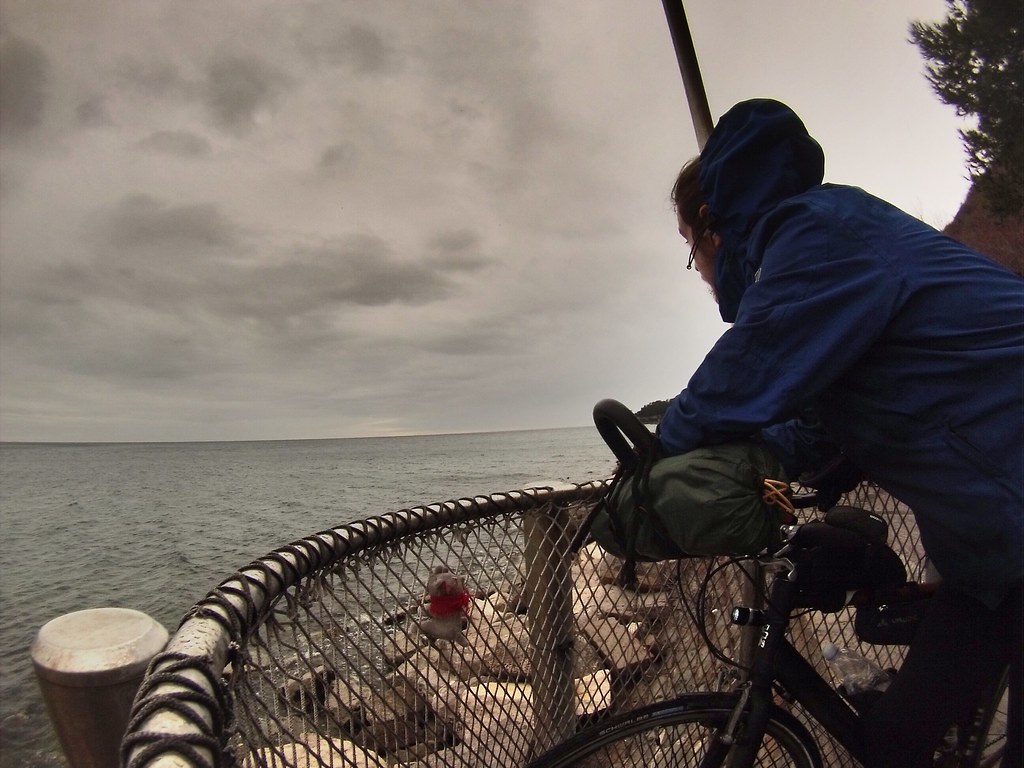 The mountains are high but I was unstoppable. With fortunately no injury I’ll cycle along the Adriatic Sea to Slovenia and Croatia. From there I will go to Serbia.

The next story will be coming from Eastern Europe. Until then!