An icy wind is coming from my left. Snowflakes fly horizontally past me. Today I left Murmansk. I follow the M18 which goes from Murmansk to the Norwegian border. It is already getting dark. I left late and still have a lot of energy. I cycle until it’s completely dark. The weather conditions are not getting better. The wind is increasing and it starts to snow harder. I use a mask and my ski goggles to completely cover my face.

I see less and less through the ski goggles but still enough to cycle. I stop. I get down to my waist in the snow in my search for a place to sleep. This is not going to work. I keep cycling and cycling. A van stops in front of me. He gestures me something and wants to take me a little part of the road. It might be my savior in this tough weather conditions. We try to get the bicycle together in the back. It doesn’t fit. My front panniers are in the trunk. The man murmurs something in Russian, closes the doors, gets in the van and starts the engine. I’m frightened.

Is he going to take off with my passport!?

I run and throw my bike in front of the van. The man and his wife are staring at me with disbelief. He gestures that the bike has to go in the van from the side and that he has to move the van for that. I utter a deep sigh of relief and feel stupid at the same time, why don’t I trust this guy? We stuff my bike and bags into the van and drive a bit. A little later I’m standing alone at a junction of the road. He to the right, I to the left. The wind blows harder and it snows heavier. I have to find a place to sleep. It is nine o’clock in the evening and the next village is 80 kilometers far away. Shall I stop someone and ask for help? Fortunately I see a small hill next to the road. I stumble to my waist in the snow. I start digging a cave behind the hill, out of the wind. The only option for tonight. An hour later I’m the proud owner of a beautiful white hotel room. My bivvy bag goes in. I prepare an instant meal and fall into a deep sleep not much later. 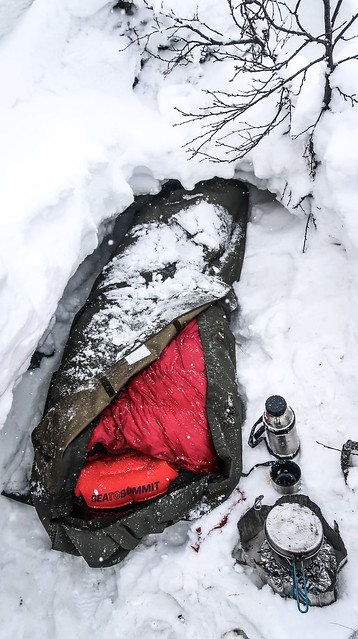 Two days of rest turned out to be amazing in Murmansk. On the second day I met Sergey. Sergey is from the cycling club Velomurman. He had arranged two interviews on some local channels in Murmansk. Sergey’s job is to maintain car tires. If there is a leak, he will repair it on location. We drive to the other side of the city to a customer. Sergey talks about his experiences with bicycle travelers in the winter. In 2011 the Japanese Haruhisa Watanabe was hit on the M18 around Kandalaksha. He didn’t survive the accident (may this great adventurer which climbed all seven summits Rest In Peace). Sergey received his family and took care of a monument along the way. In the winter of 2015, the Korean Jo was also hit. She came out alive with only a broken bike. She was blazing about the Russian traffic and the driver who thought it was strange that Jo was cycling on the main road in the snow in winter.

The chance was much greater that something would happen to me through traffic than through the cold weather. Fortunately, I arrived safely in Murmansk.

That evening I gave a presentation for the cycling club and a number of interested people. Olga, a very friendly lady from the town of Severomorsk translated my story live in Russian. She also gave me a lot of advice about the route and about places in Norway. It was a very special heart-warming experience. I got a lot of respect for my cycling attempt in the winter and even received items as a souvenir. 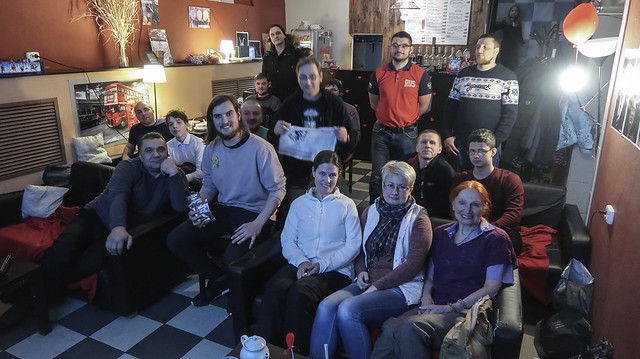 Most of those I spoke advised me to do the last stretch from Murmansk to Norway by public transport. It is the same unsafe M18 and perhaps even more important, this route is a strictly controlled area because of a military base.

It would not be comfortable.

That morning I clean up my white hotel room. Aluminum mat, air mat, sleeping bag and bivvy bag I stuff as small packages in my panniers. I cycle into a military checkpoint after half an hour. No problem, I can continue cycling. I don’t believe my eyes when after a few hours large tanks apparently in the white fields around me. This is a practice area and I cycle fast through it. The town that follows, I cycle even harder through it. Everywhere soldiers are walking around with weapons. This is basically a closed area for tourists. The only thing allowed is to continue cycling on this road. I’m grateful for it, they could also close the area for cyclists.

When I see the town Sapoljary in the evening I notice a white Peugeot. Haven’t I seen this car before? I realized at that moment that I am being watched. I’m not surprised because I had previously read this on the internet. To my left is a petrol station with a road to the left. I hit that road with the idea that I want to go to the petrol station. I cycle through and yes, the white Peugeot moves along me. I quickly reverse when the car has disappeared. I chuckle at myself, I just send him in the wrong direction. I buy something fresh in the gas station. To see the white Peugeot on the terrain a few moments later. I smile and think of even more devious plans to keep my follower busy. 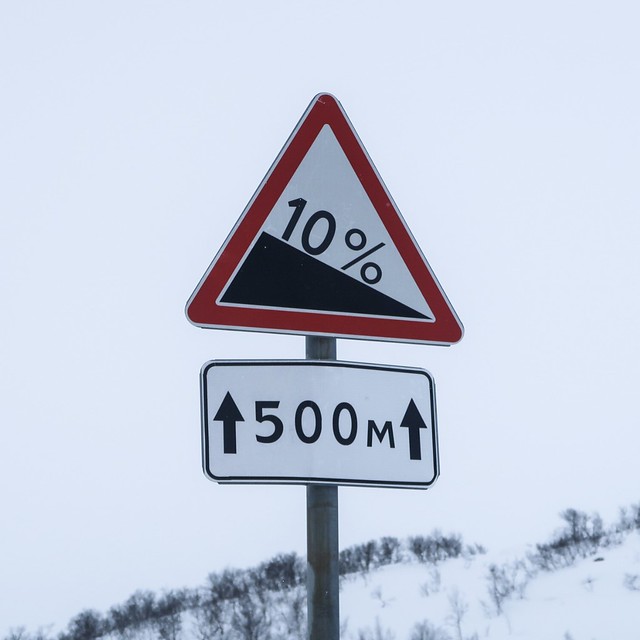 The last night I sleep in a hotel because camping is not allowed. The next day I cycle into the border area with Norway. Just before the border area I fill quickly my panniers with groceries because later in Norway everything will be expensive. The border area is more than 40 kilometers and I blast through it like a rocket. Norway, I think, Norway. In two hours I cycle the 40 kilometers.

Everything goes comfortably at the Russian border crossing. A friendly person asks a few questions about my journey and a little later I can check into Norway.

At the Norwegian border, a lady looks at me with disbelieve. “Why are you cycling in winter?” I tell her that it is beautiful here in winter. Curiously, I ask when the last cyclists have been here in winter. “Last cyclists came in 2015. They were refugees that flew to Murmansk and cycled to the border.” I had indeed read that in the news. But otherwise never an adventure cyclist that crossed here in winter? I can’t believe it. After a nice conversation I go through the last lever. 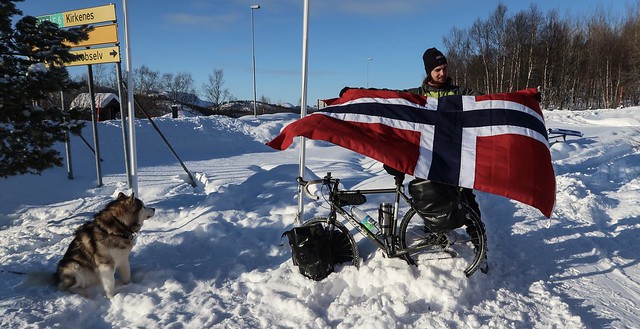 And then finally, I reached Norway.