This story is about a boy. This boy is going on a voyage of discovery. In a journey that starts in a self-built prison but gradually comes closer to liberation. A liberation by living a dream. The dream of a bicycle journey to the other side of the world. For him this journey becomes a discovery of values, identity and meaning.

I am that boy. This story tells the development of my identity from when I was young until I discovered bicycle travel. You could use the story as a children’s book, to read to, but also to inspire yourself.

I wish you a lot of reading pleasure, Henk

I’m going to tell you a story about a boy.
A boy who grows up with a monster who is loving, but often terrifying.
So terrifying that the boy starts building a wall. A wall where he can hide and protect himself from the monster. 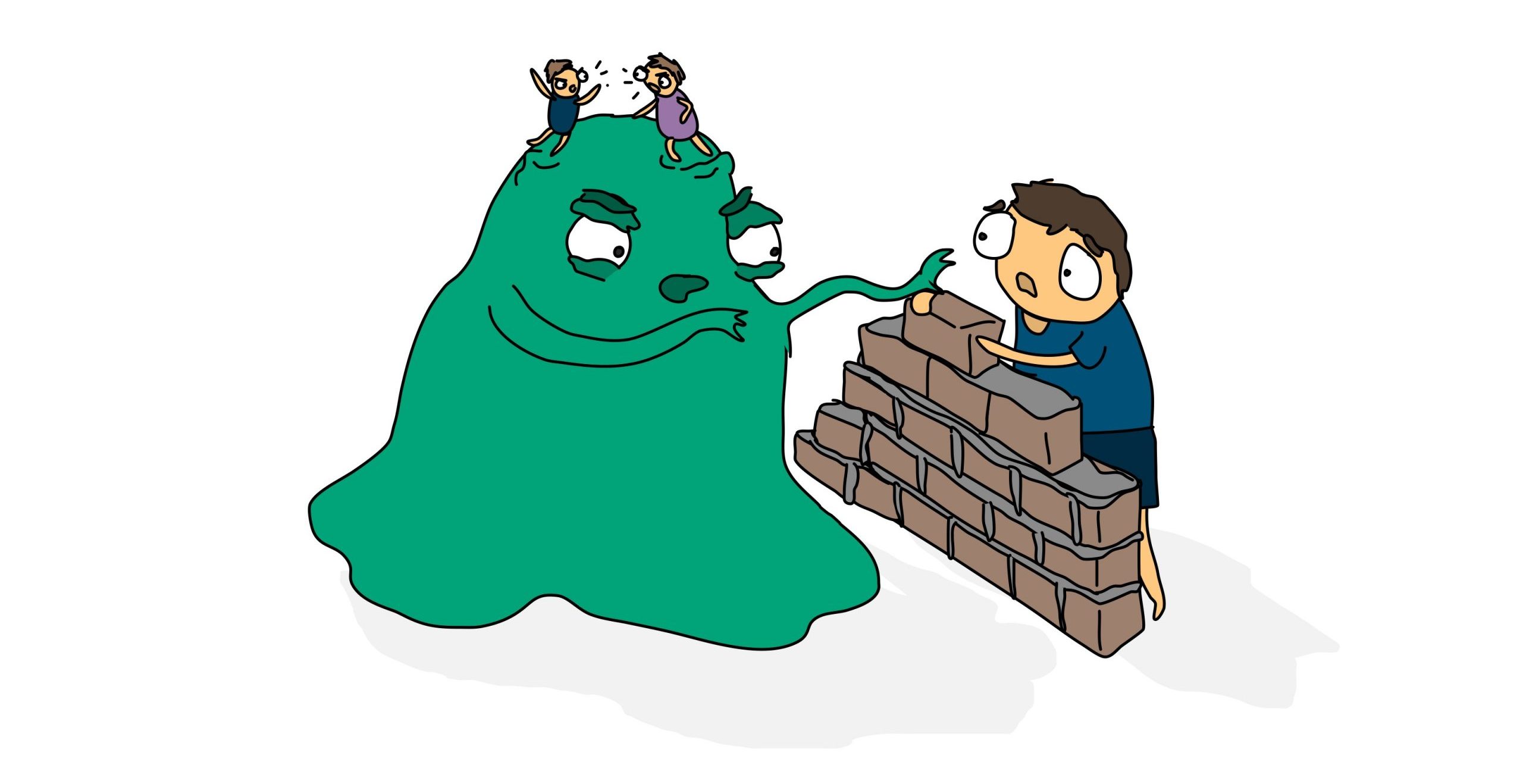 Too afraid to play

More monsters emerge as the boy grows up. Even bigger monsters. Children are playing on the monsters and they shout to the boy behind the wall: “Come play with us, it’s a lot of fun out here!”
But the boy is too afraid to play with others and he builds the wall bigger and bigger. 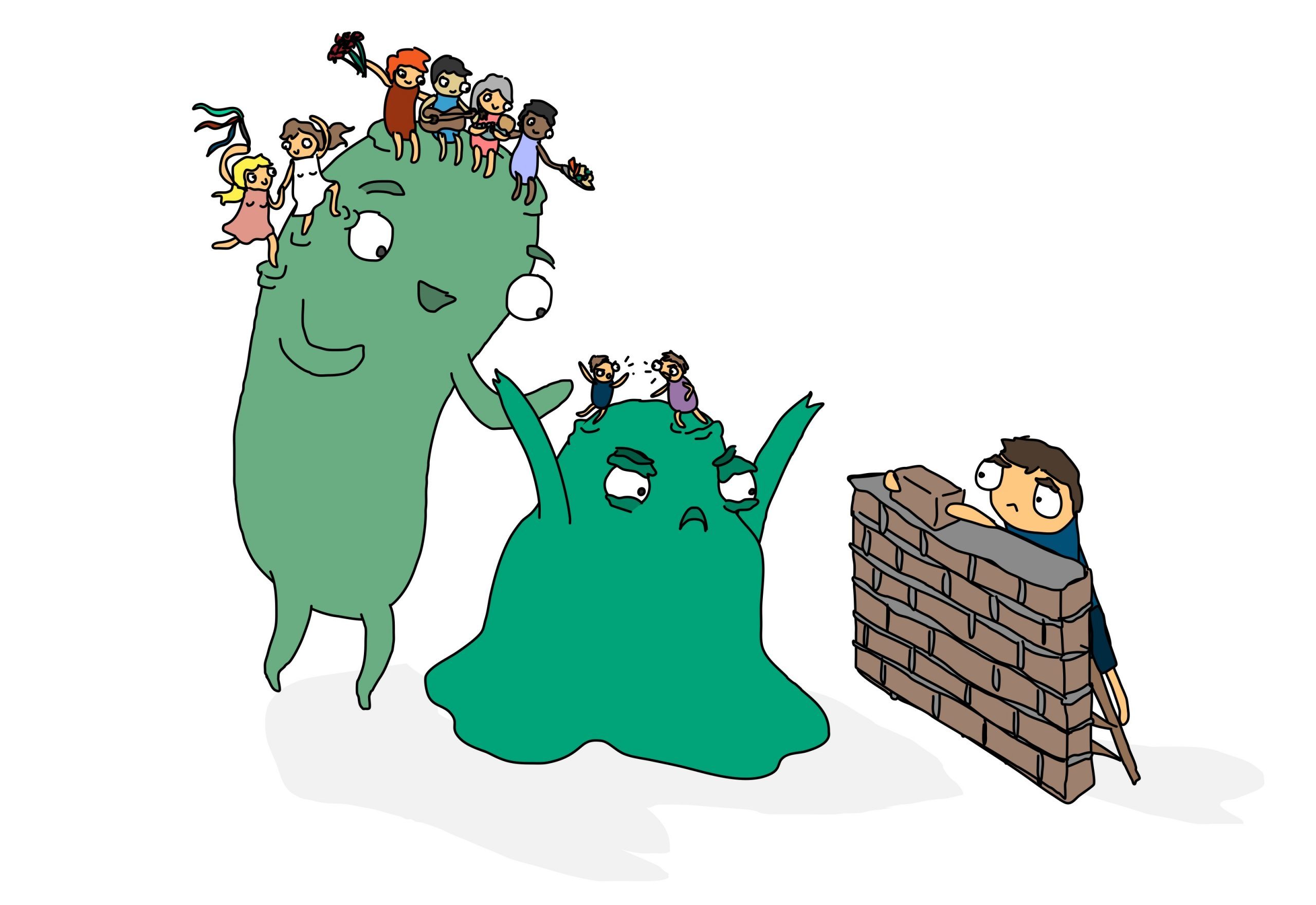 Disconnected from the outside world

The boy learns to live life disconnected from the outside world.
Monsters look at him, sometimes smiling, sometimes giggling.
One day a monster gets very angry with the boy: “Why?”, the monster asks angrily, “Why did you build this wall, it isn’t fun at all!” 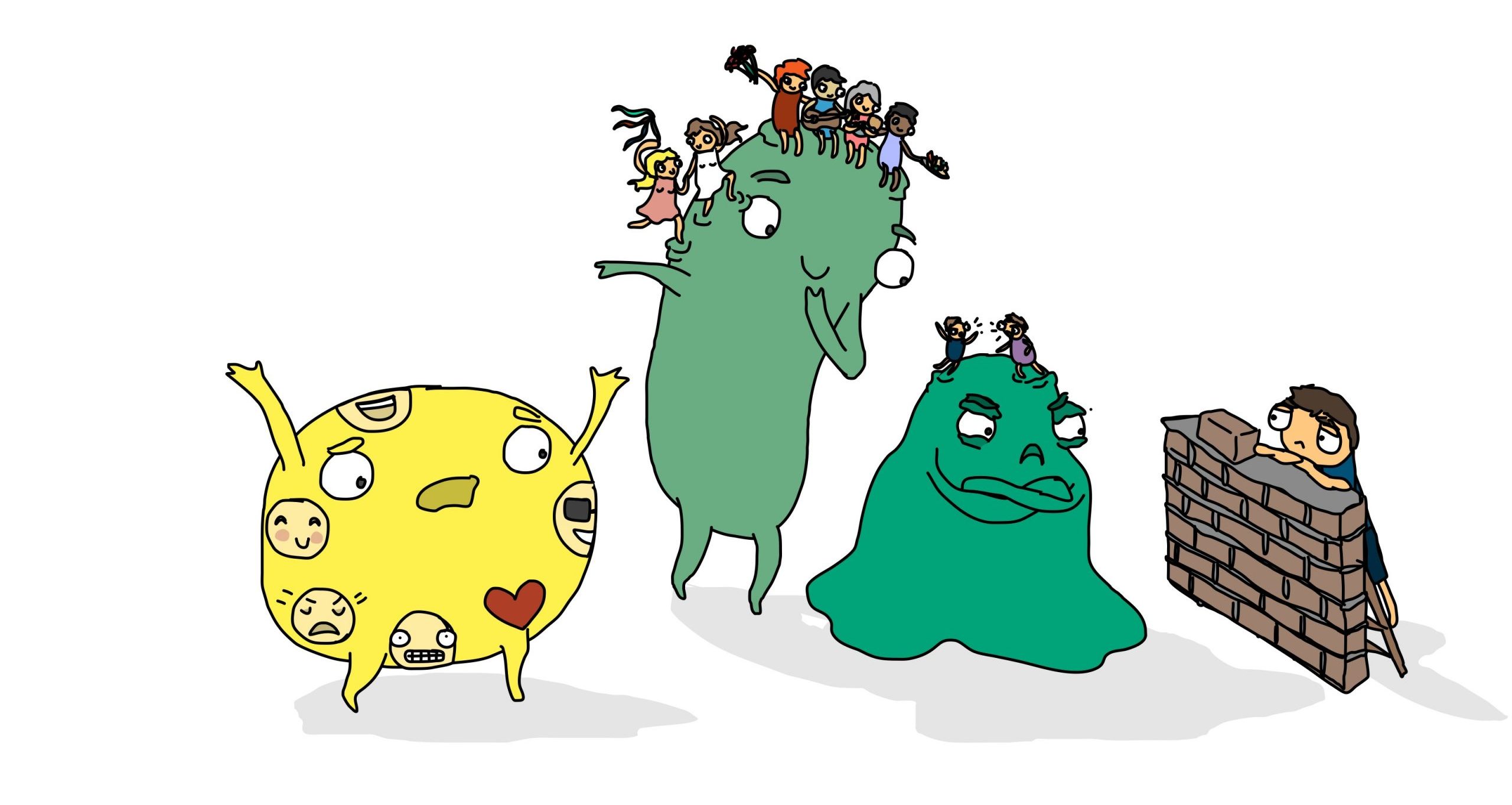 Although the world is so big and colorful, the boy feels safe and comfortable behind the wall.
The boy learns to solve his problems very well, but he develops into an insecure person. Someone who is socially uncomfortable. Sometimes the boy tries to connect with others from behind the wall.
But no one really understands the boy for who he is.

It seems that everyone is building friendships with each other. Children play outside and fill their backpacks with beautiful experiences and colorful toys.
The boy feels an increasing distance between him and everything that happens behind the wall. 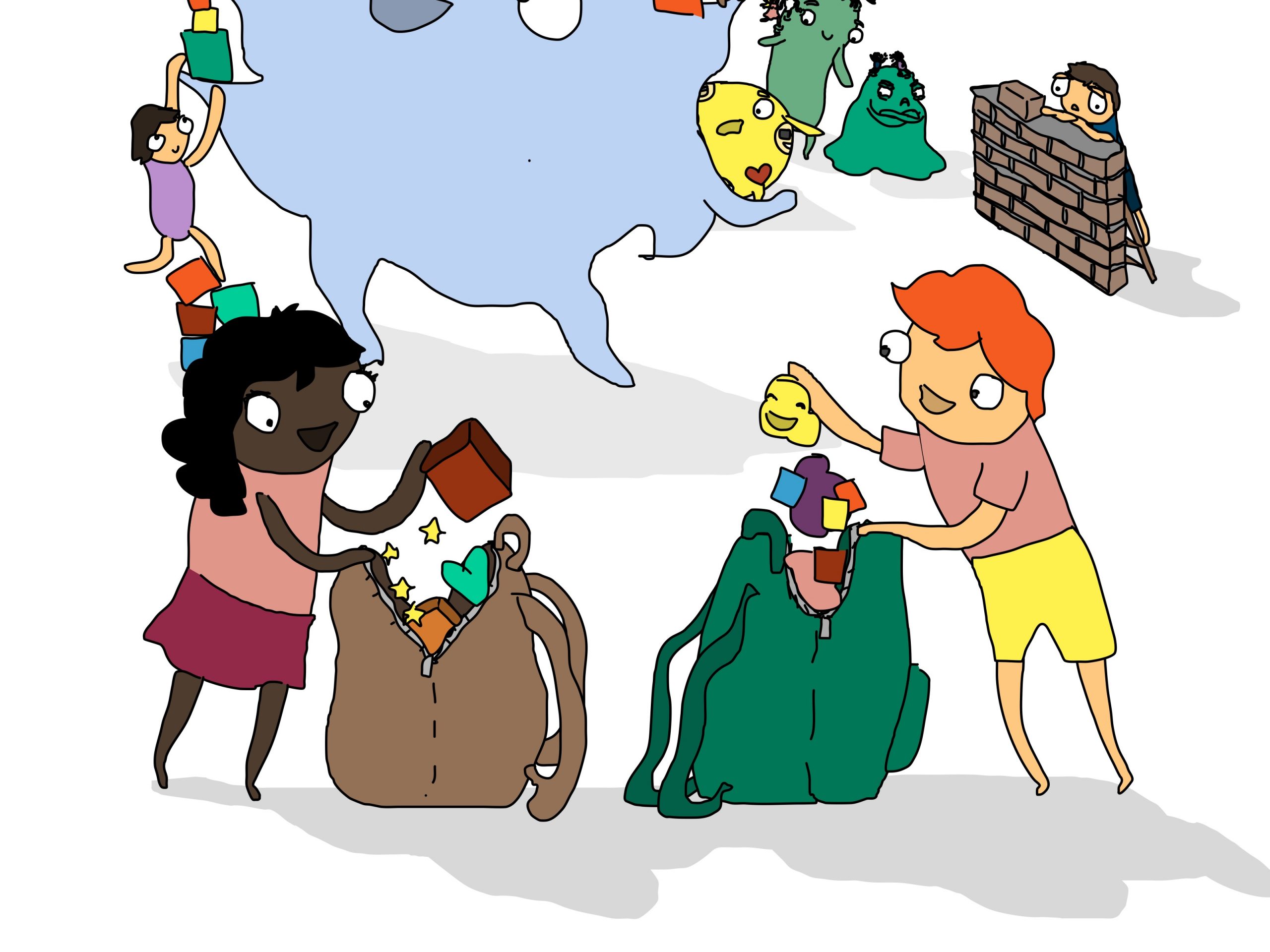 He looks at his own backpack and shakes it a little bit behind the wall.
But the backpack is empty. 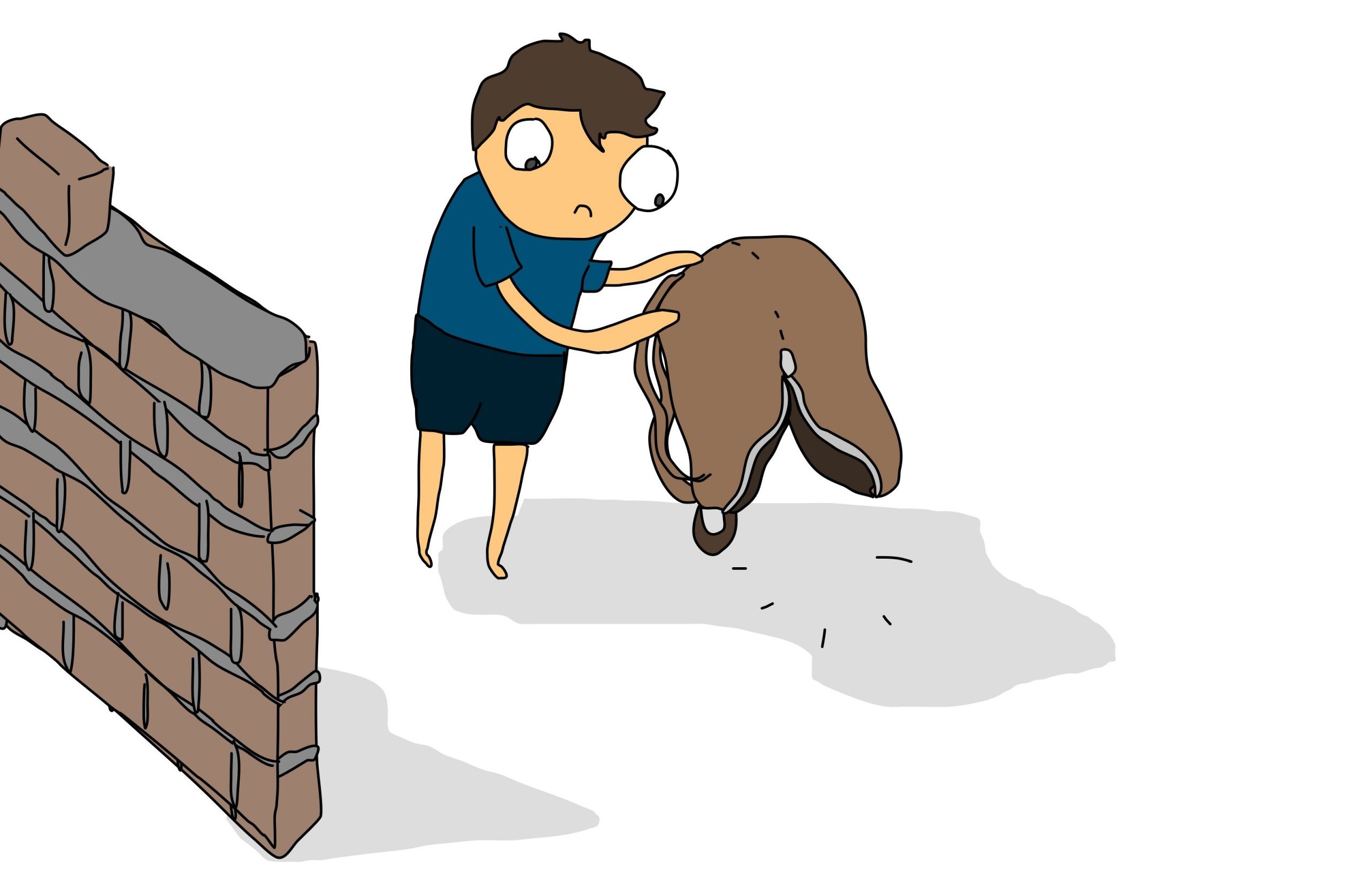 The boy walks into a world where it’s difficult to identify with anything.
A fishy monster approaches him from behind and whispers in his ear, “Hey boy, do you see that tail over there? You can take a beautiful walk over it and will forget about all your problems! ”
But the boy doesn’t trust the fish monster and he runs away very fast. And luckily he can run very fast with his empty backpack. 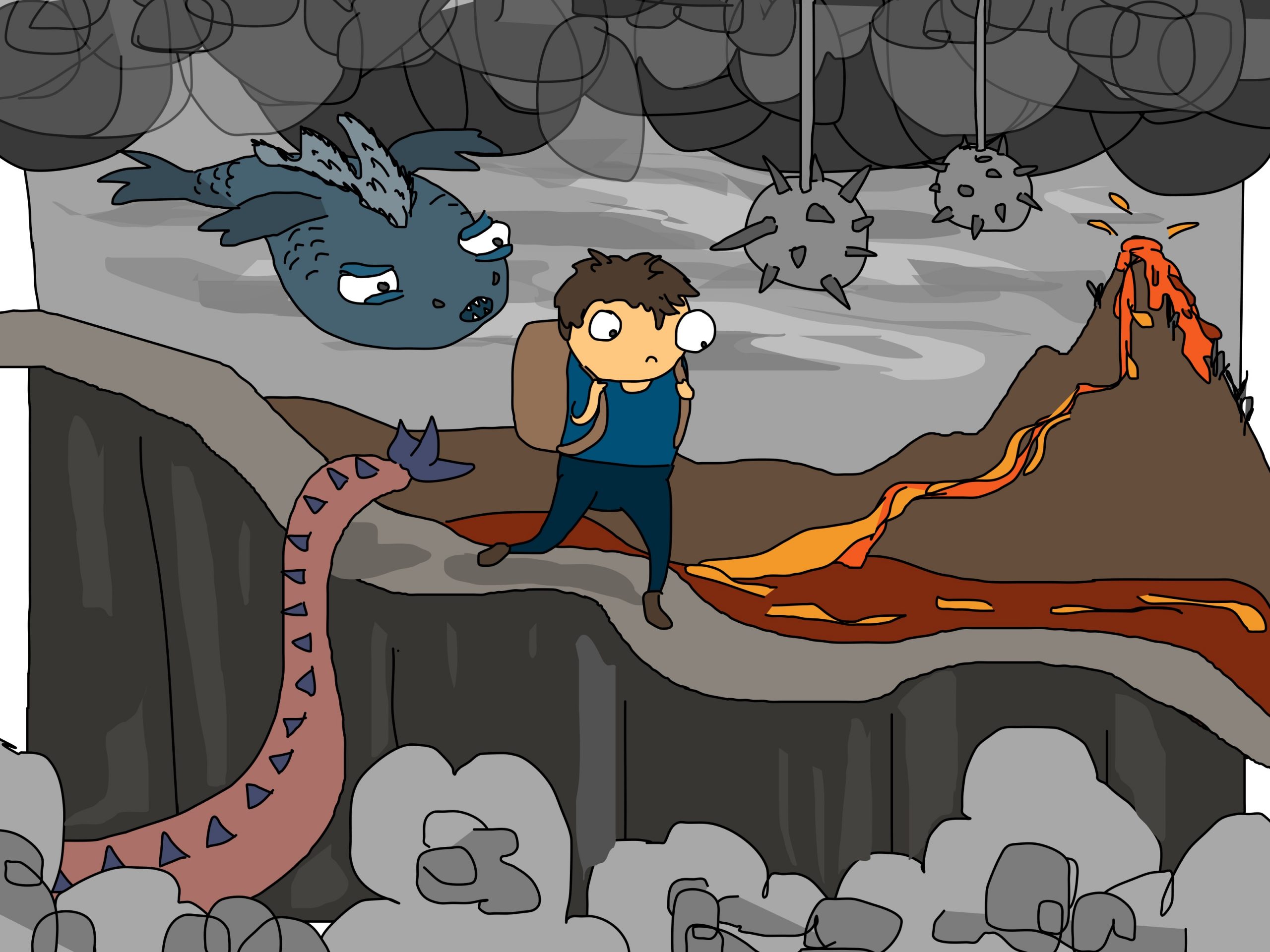 One day the boy walks over a big, very big computer. He looks at the screen. On the screen he sees others who are on an adventure. They walk and cycle in beautiful nature in countries that are very far away.
The boy takes another good look at the screen and walks almost over every key on the keyboard. It seems that there are no monsters at all in these distant countries. 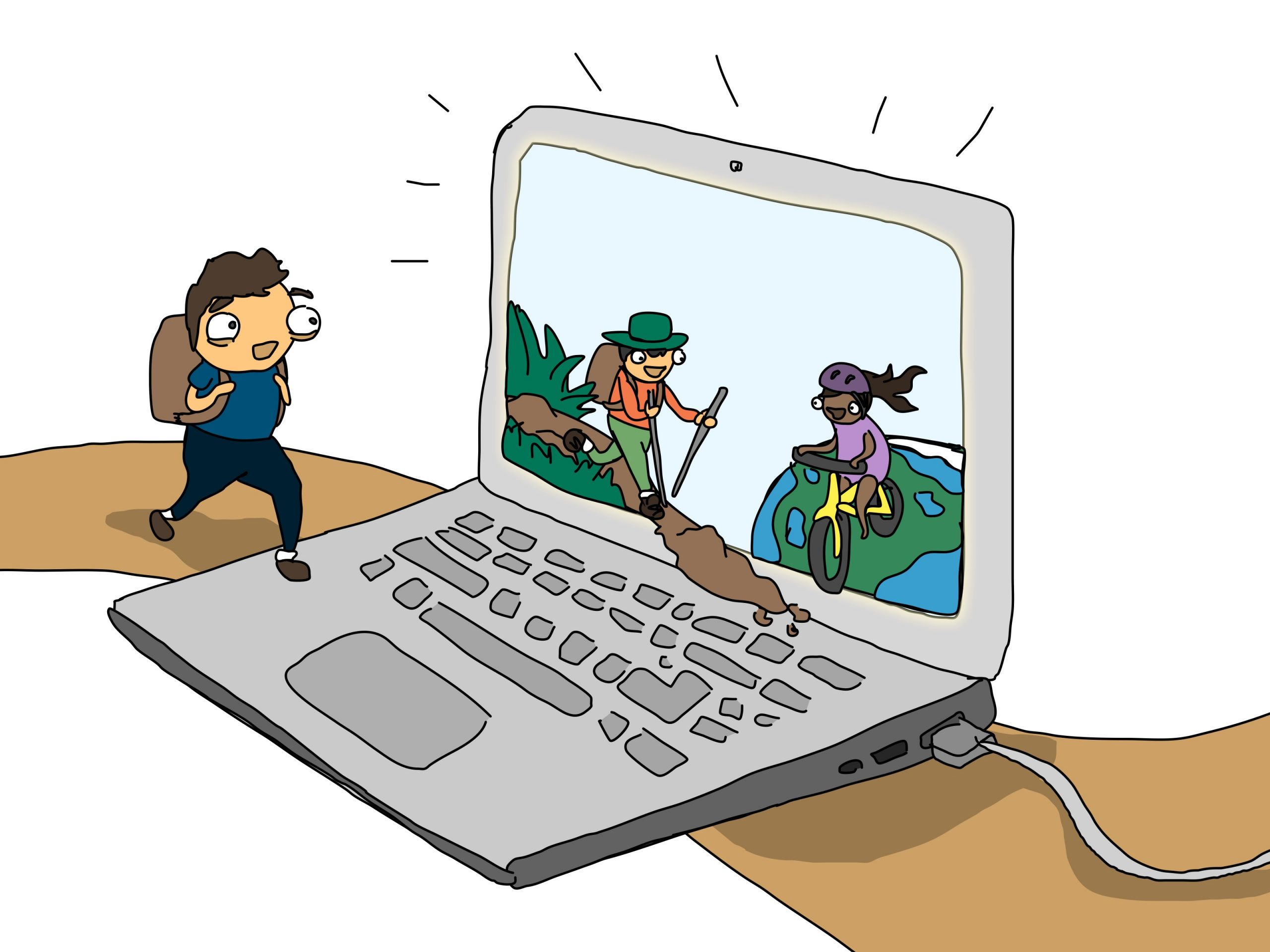 This one day, everything changes for him.
The boy suddenly becomes more happy. He starts with a big puzzle. With every puzzle piece he connects an ever-increasing picture.
A picture of a dream. A dream to cycle to distant countries all alone on a bicycle. 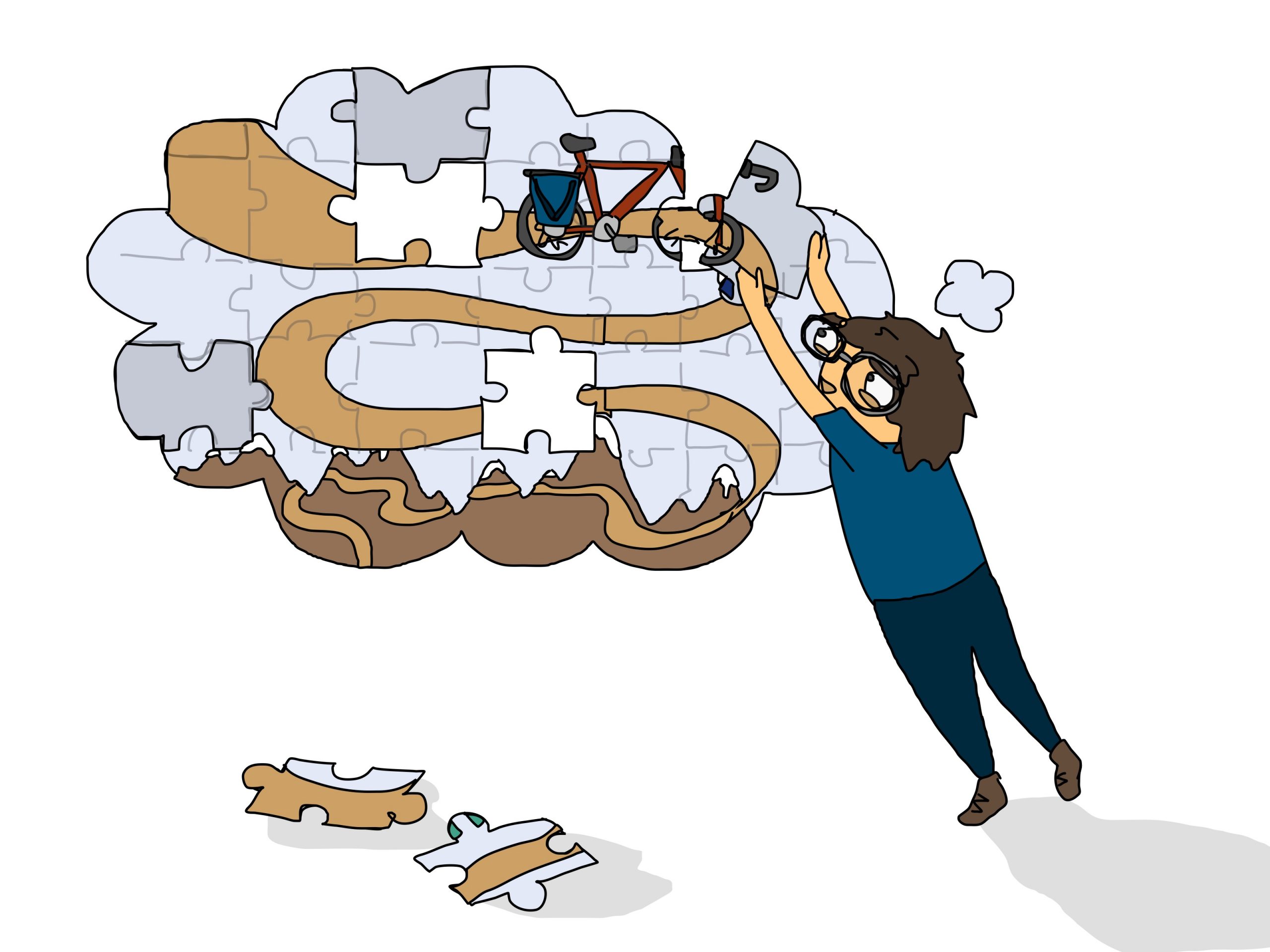 And so the boy creates his first real dream as an escape plan to get away from all monsters.
A bicycle journey all the way to the other side of the world.

A monster tells the boy that this is a dangerous idea.
But the boy doesn’t care at all. It feels like this dream is his escape to a world of freedom. 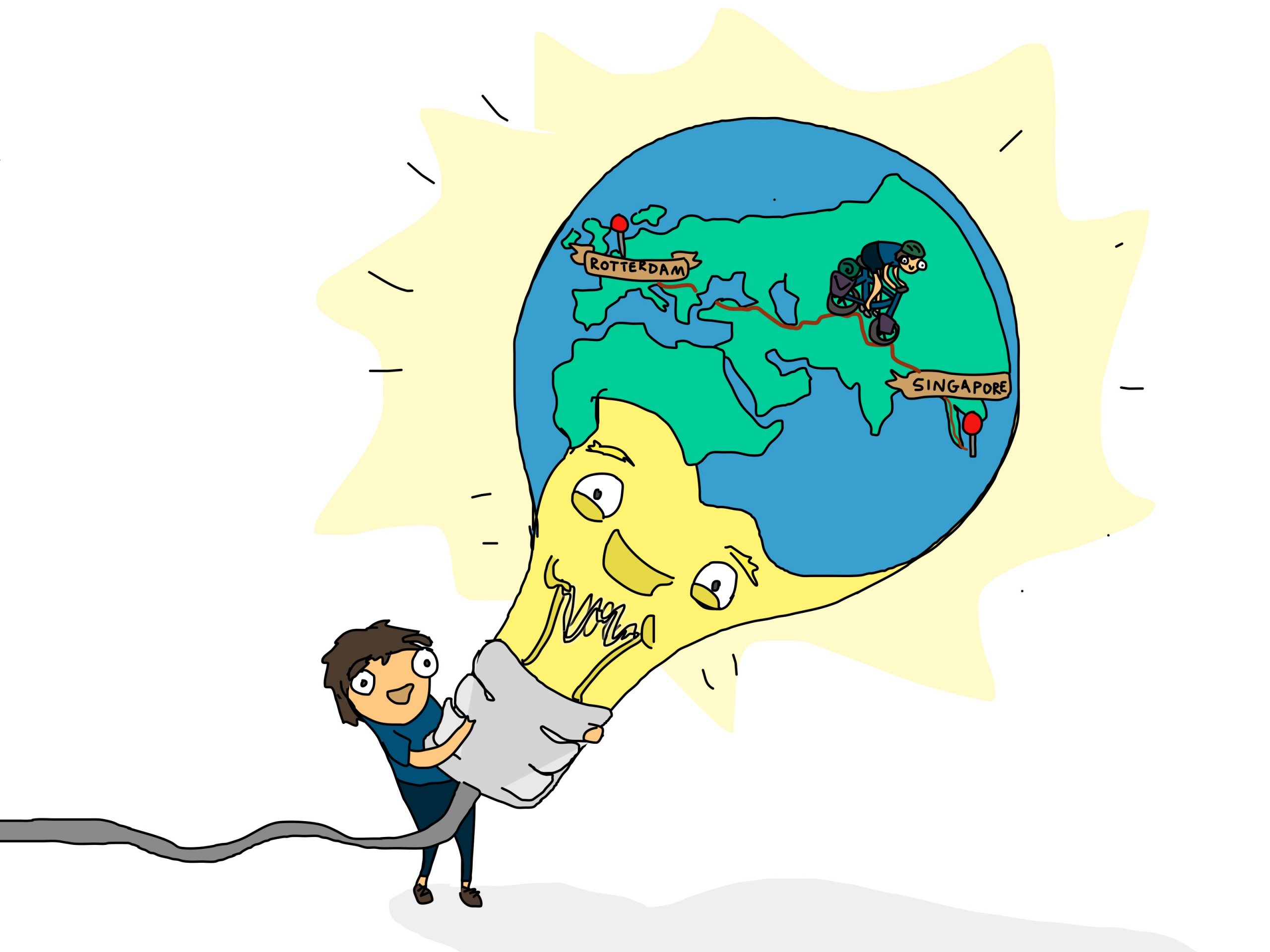 Not much later the boy cycles away from home.
He soon discovers that there are monsters everywhere. But they are funny looking monsters that don’t act scary at all!
From a world where the boy felt lonely and often sad, he cycles into a world where he can opens himself up to happy feelings. 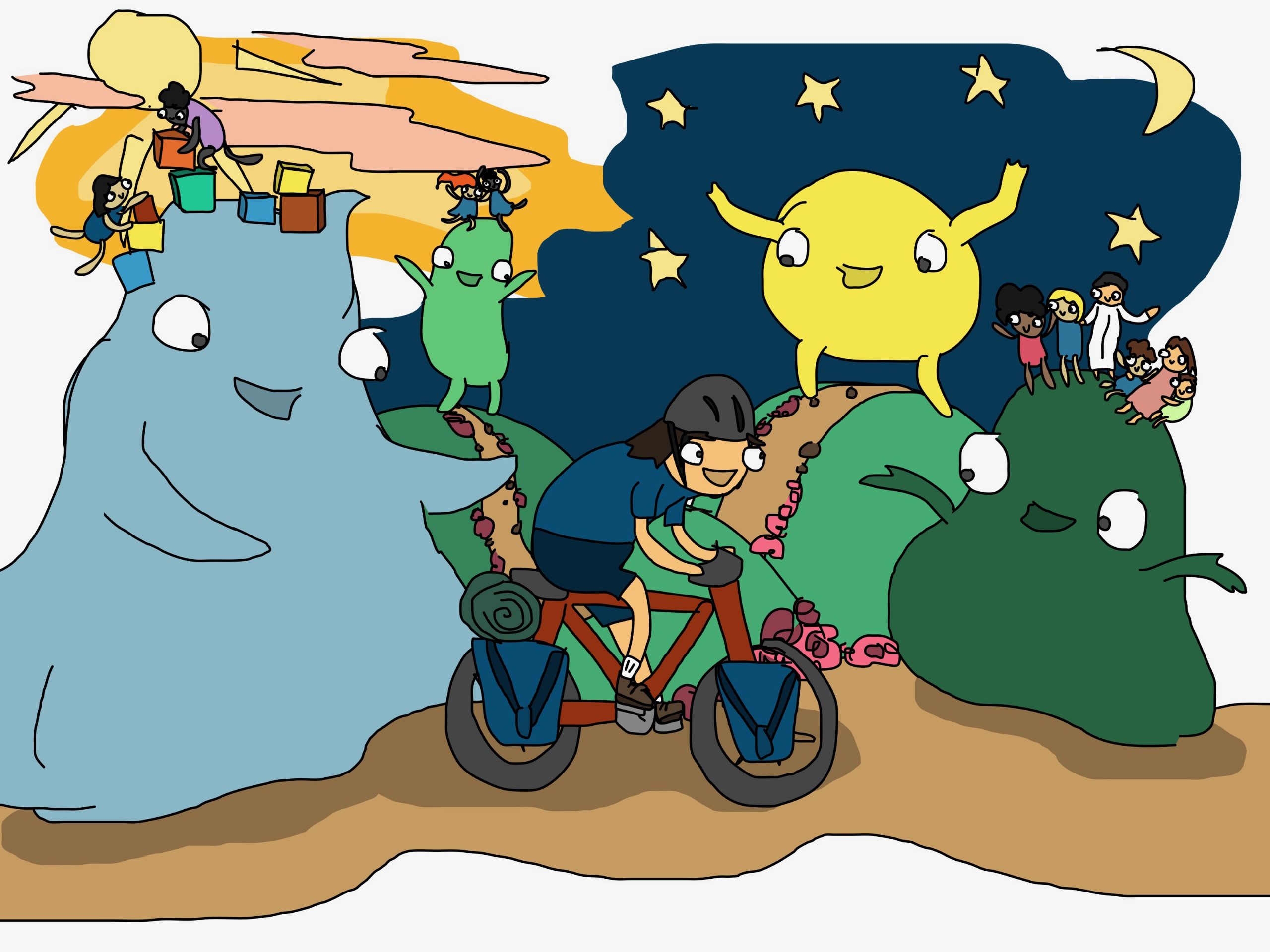 A world of magical adventure

His problems suddenly seem very small compared to a large world of magical adventure.
The boy learns to keep life simple and only worry about things that really matter. 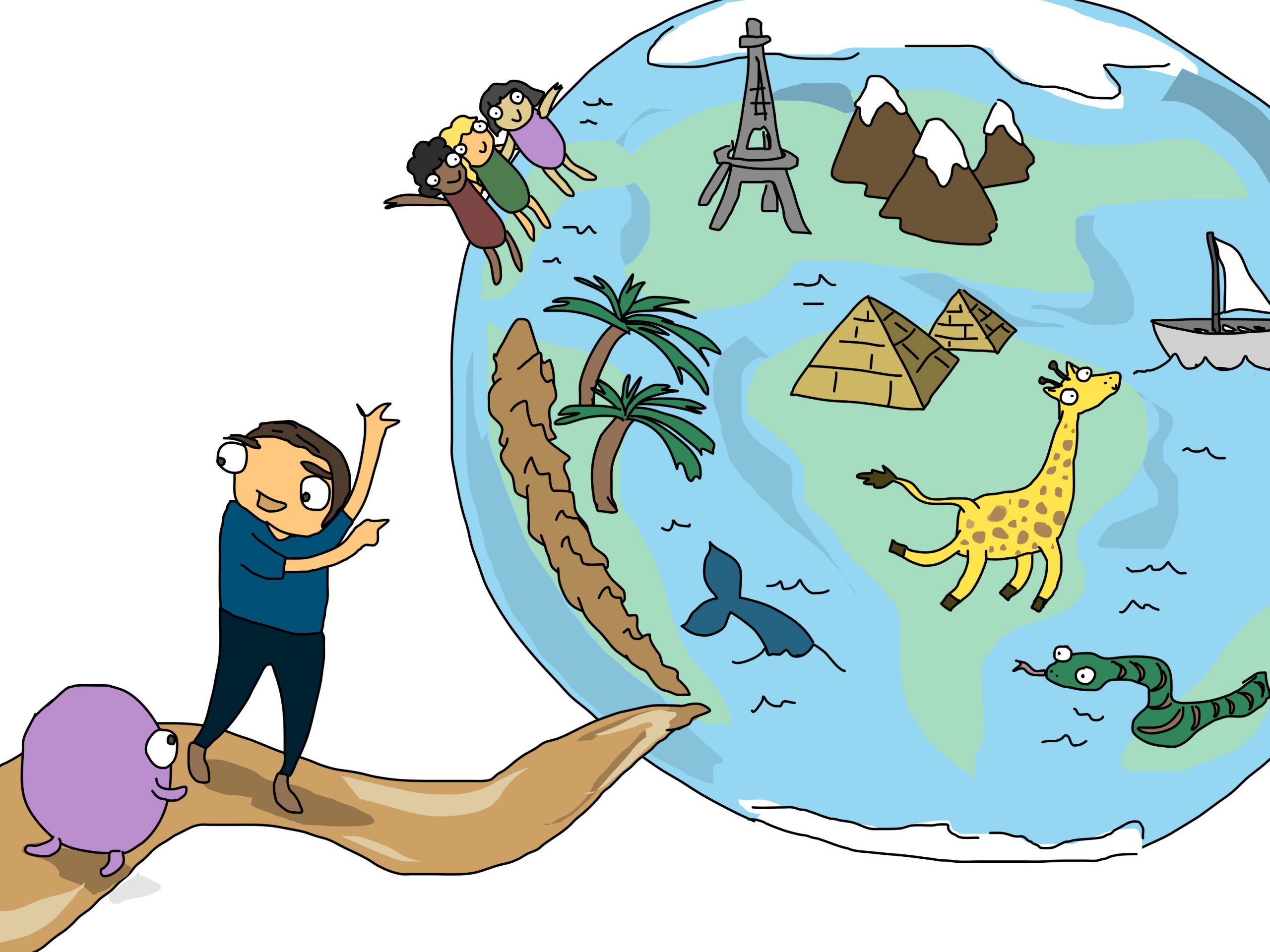 There was a country this one monster had warned the boy so much about. In this country, the boy meets a lot of lovely people. People are strangers to the boy, but the boy soon feels related to them.
These people give the boy food and drink. A love he had never really opened up to. 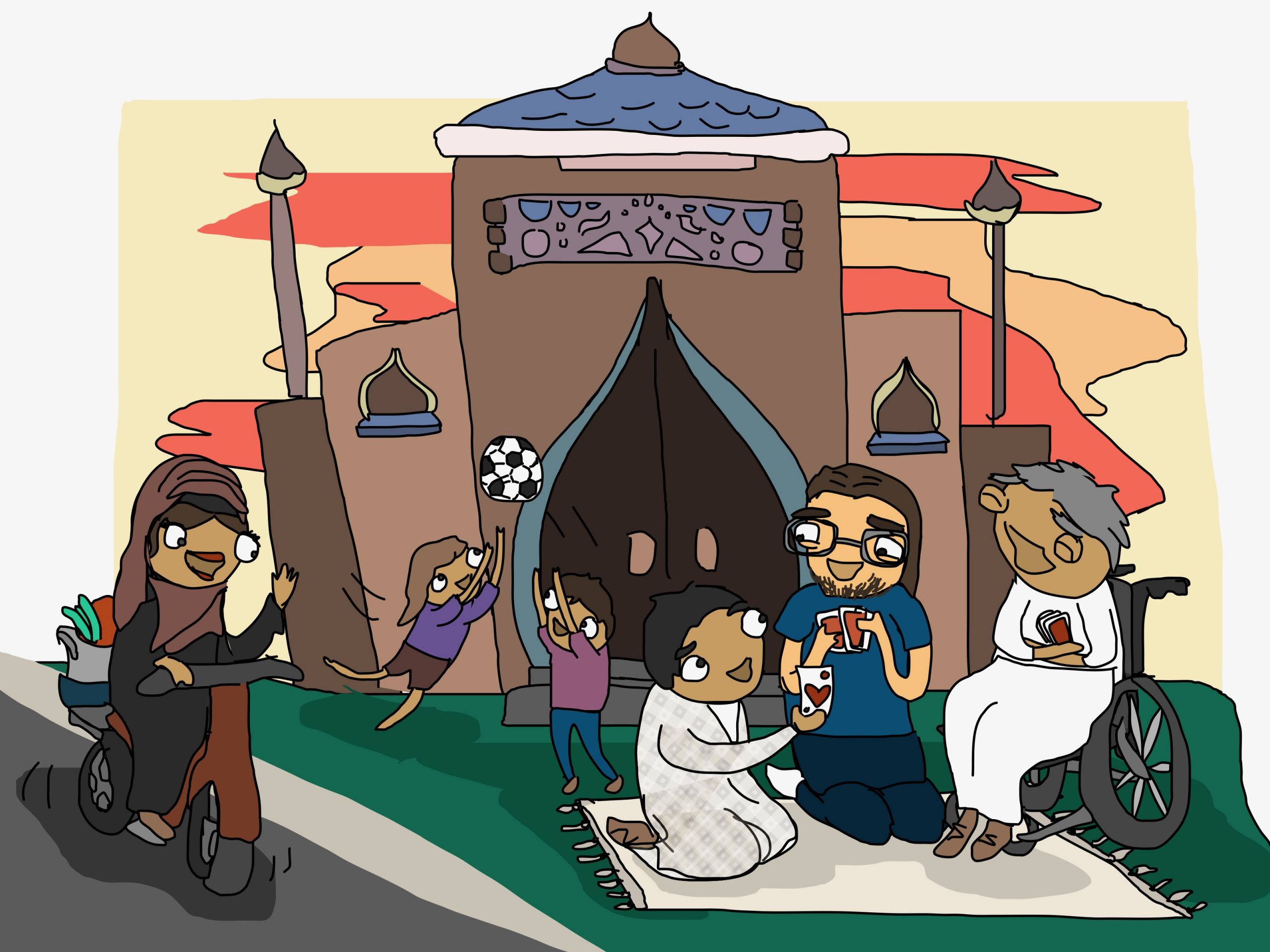 The boy no longer feels lonely. He forgets the wall and the scary monster of the past.
He can let go of everything and becomes more and more aware of what he has and what not.
By connecting to other values, he learns to better understand his own values. Values the monsters tried to teach him from behind the wall when he was little. 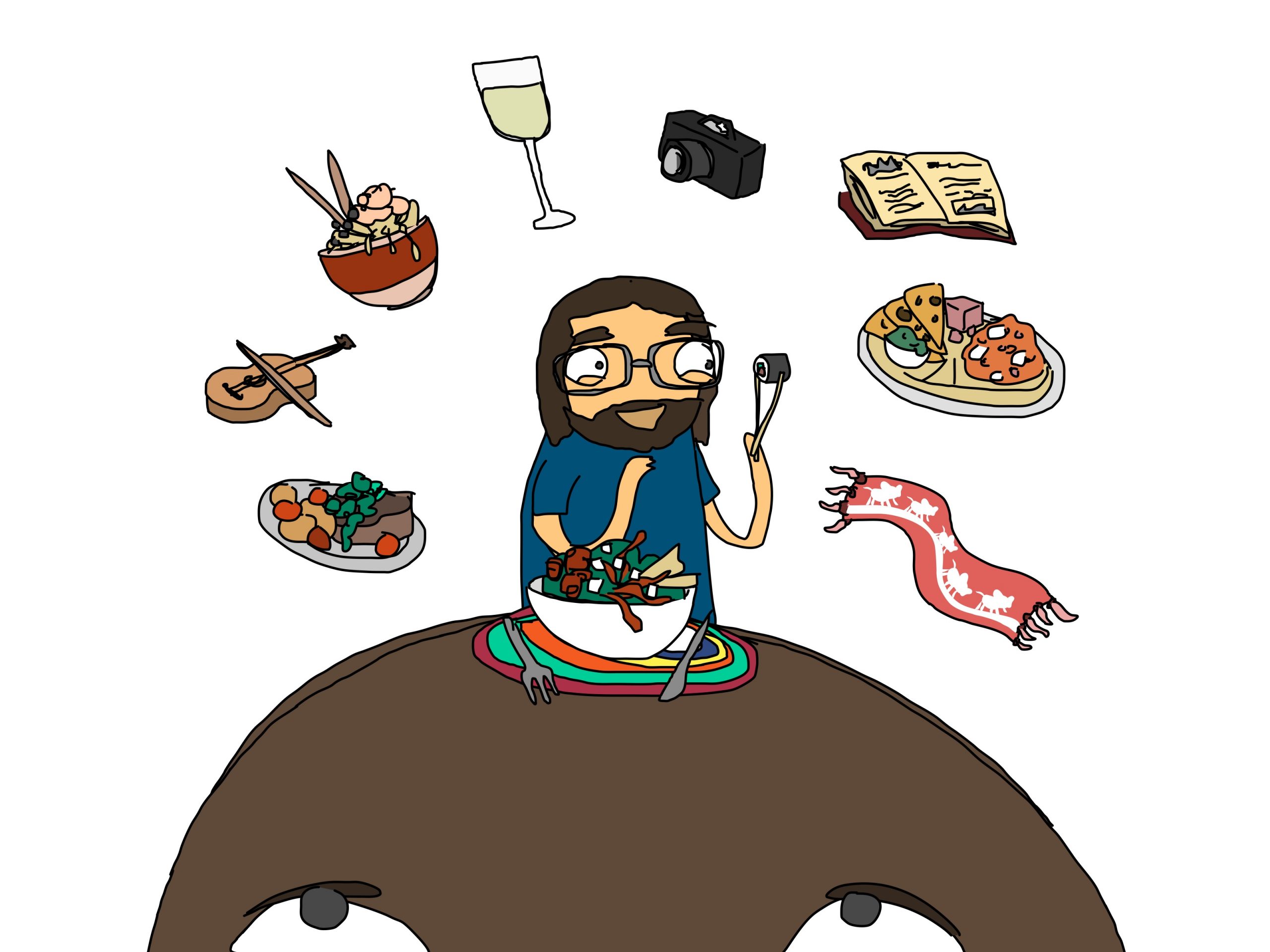 He grew up in a world where everything seemed to be about him.
Afraid of his own story and his own thoughts.
Through the experiences of traveling by bicycle the boy feels that he is part of a larger universe.
A world where his ego no longer matters. 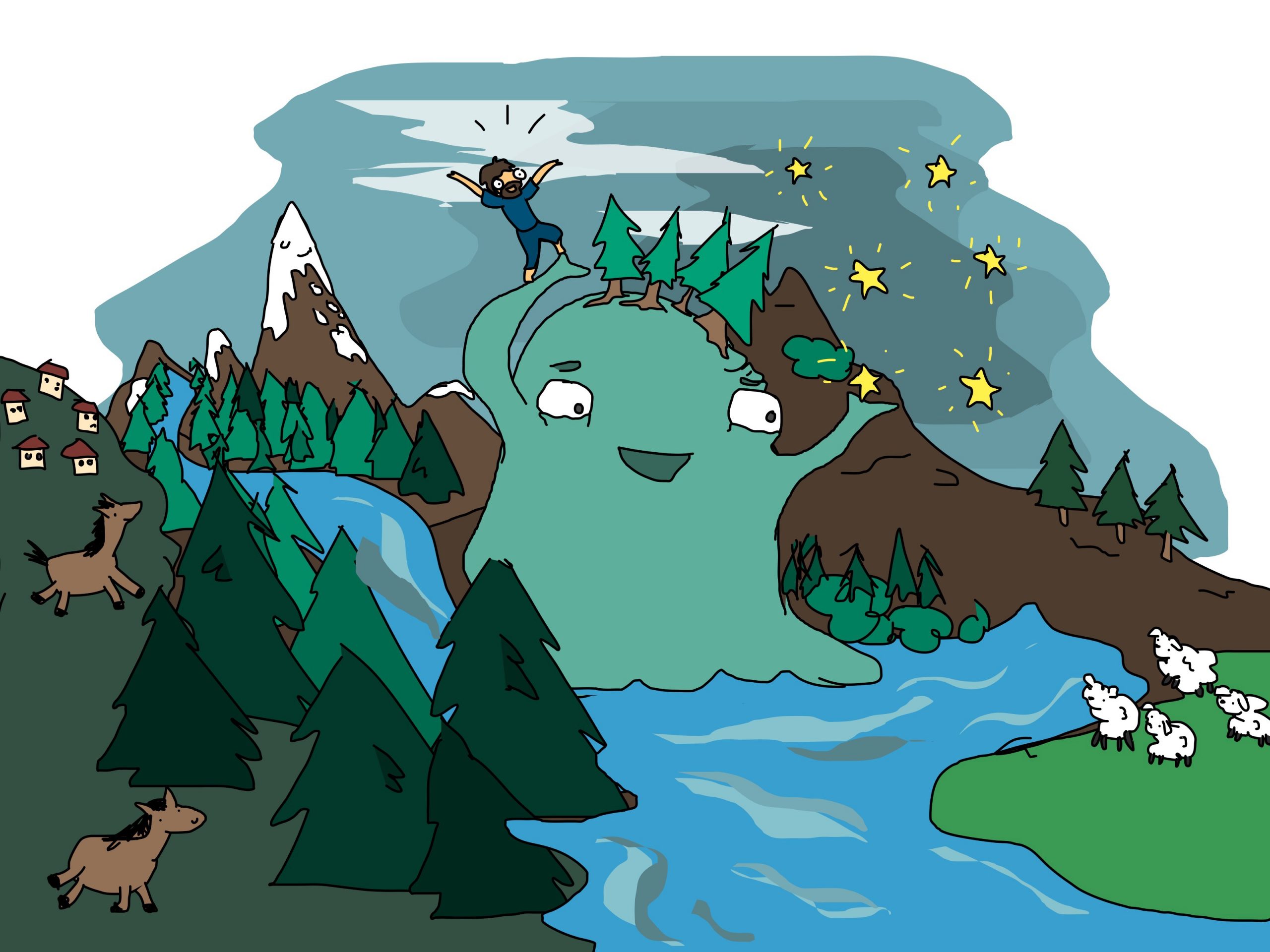 He stops to hide who he really is.
On the way, he opens his bag and asks all the monsters and people to fill it for him.
And people put the craziest things in his bag. Experiences, insights, encounters and even toys that he has never seen before. 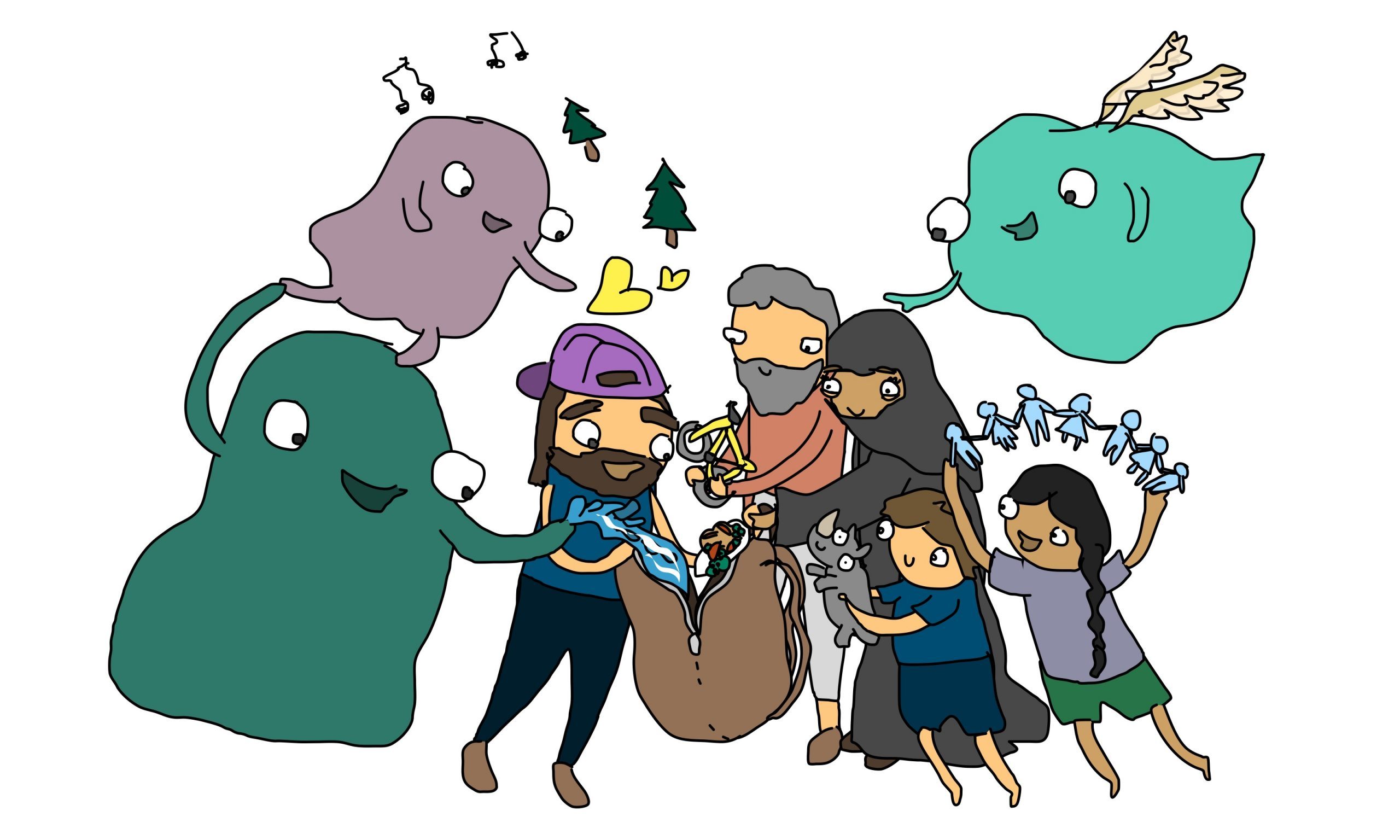 One day, the boy comes across a large, weird but very friendly potato monster.
The monster tells the boy that there are so many more realities than that reality behind the wall.
And potato monster becomes the boy’s most valuable friend.

And when the boy gets a little sad sometimes for no real reason, he tries to go back to the comfortable wall he built in his early days.
But then one of his monster friends runs over to him and shouts, “Nooooo don’t go there, that place is soooo boring!” 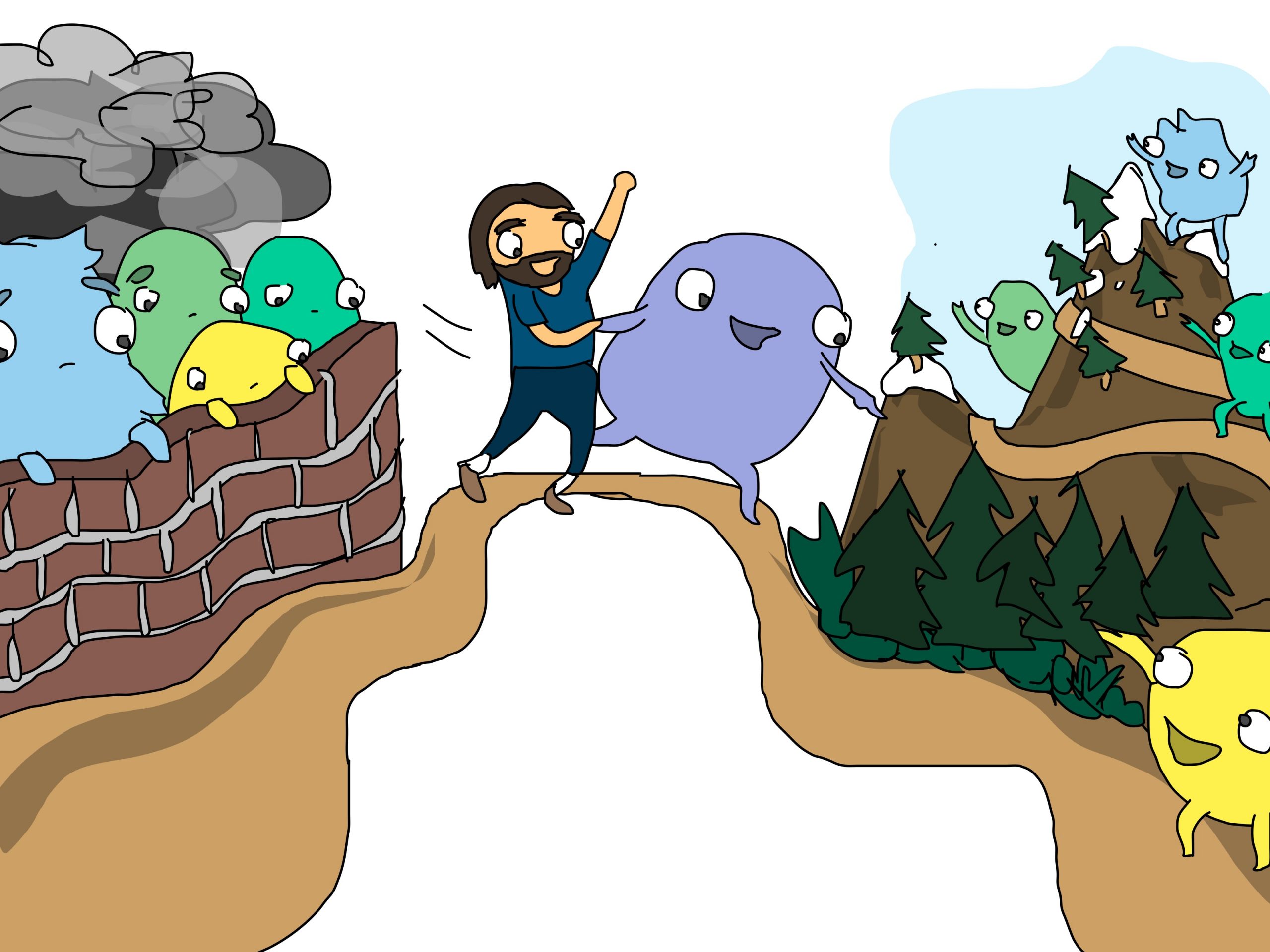 One day the boy travels to a distant country where it is very cold in winter.
And there the boy comes across a very scary snow monster who throws dangerous snowballs at him.
The boy boldly throws snowballs back. He relies on what the big potato monster had told him. “Whatever happens,” said the potato monster, “never be afraid.” 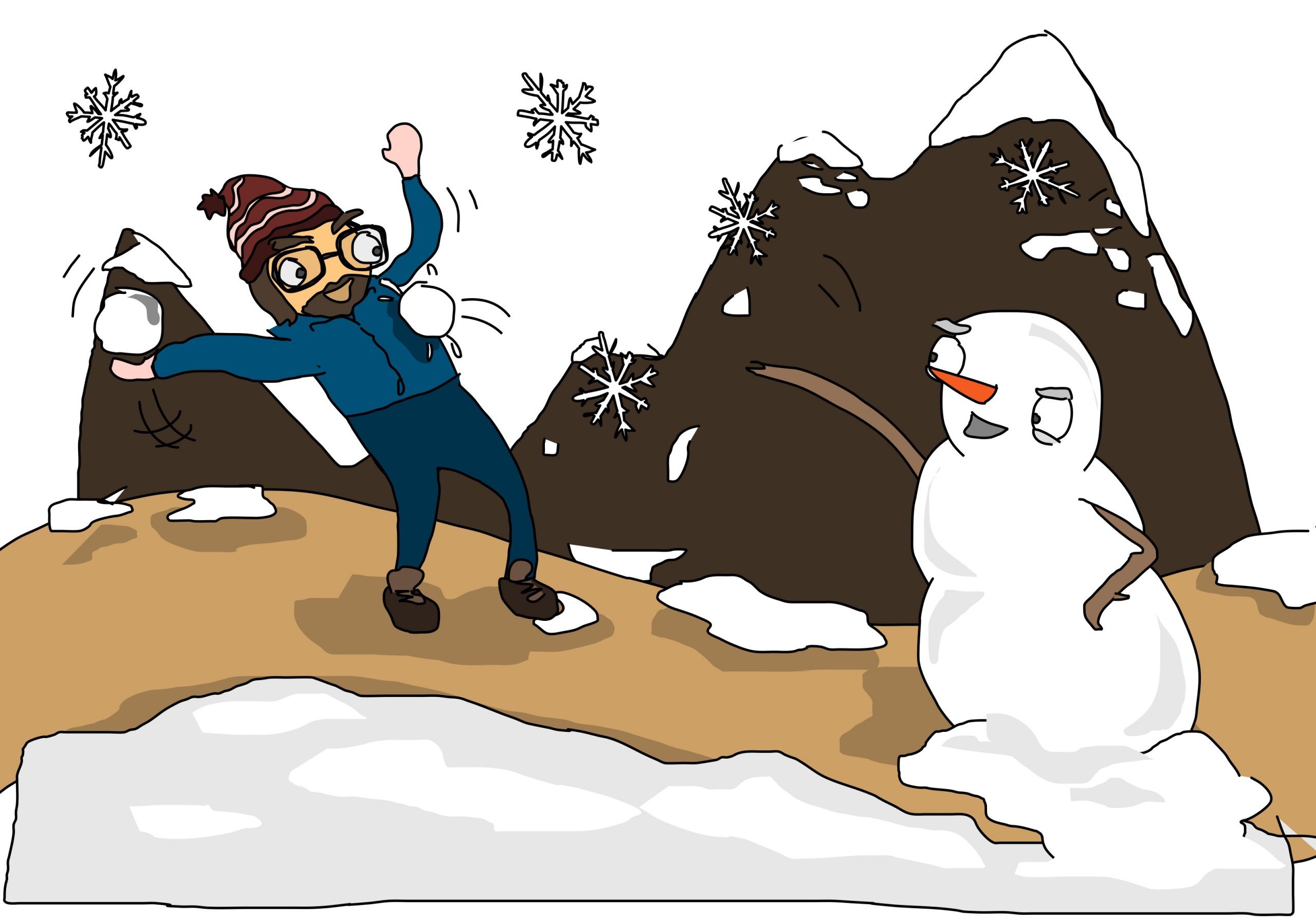 And there the boy walks slower than ever, but with a full backpack on his back. It is a heavy backpack but the backpack has a very valuable learning process.
That in order to change, the boy first had to become comfortable with his uncomfortable self. He can then be vulnerable and open up to his cheerful self, his adventurous self. So that he can connect with nature and the love of other people. 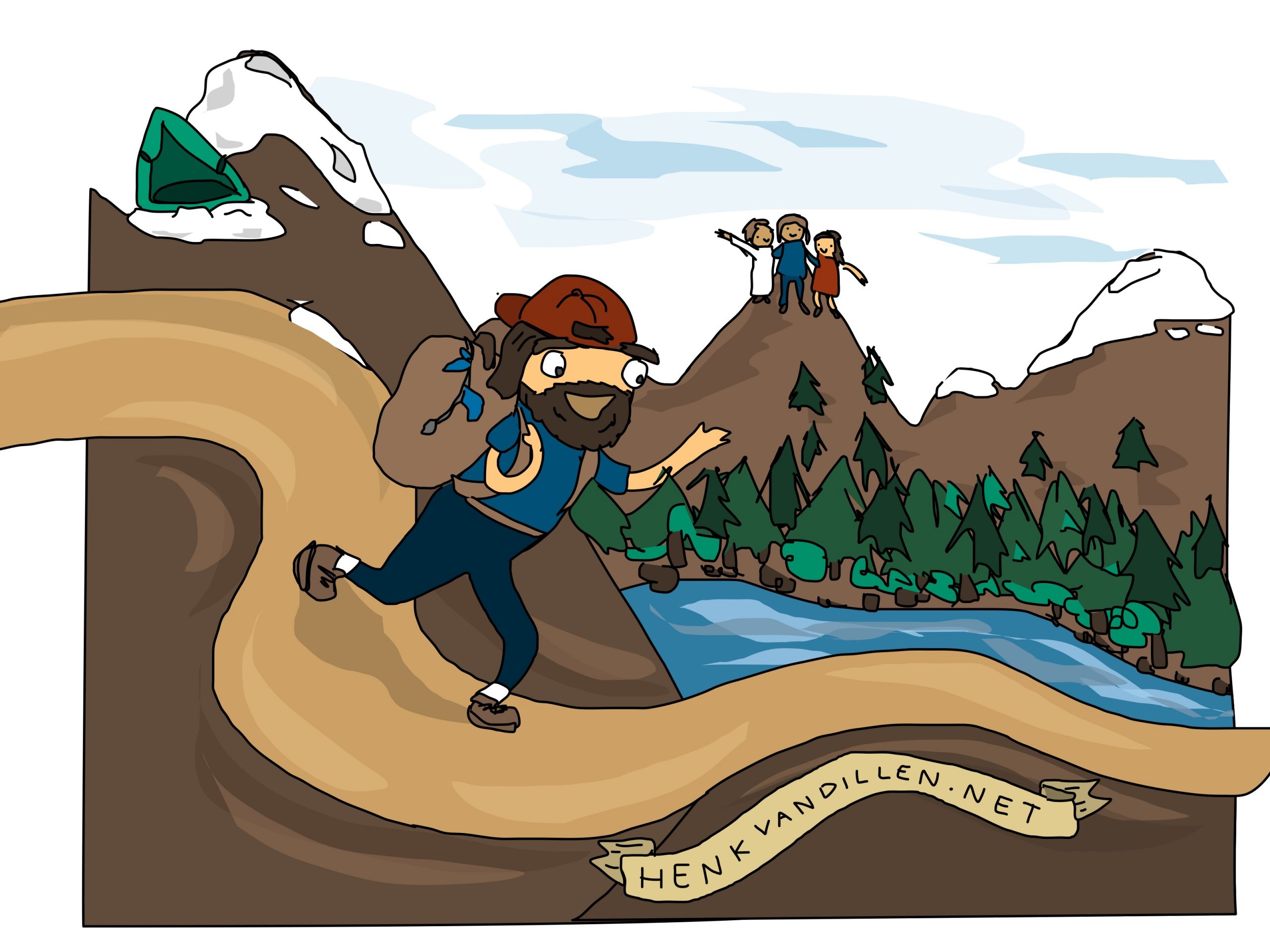