“Would it fit!?” Yelled Jade, cramming my bags into the side of her jeep in her t-shirt and open jeans. “It’ll be fine!” I yelled back, worrying that Jade wouldn’t get hypothermic, I gave the back of my bike a little extra push. Finally someone that wanted to help me with a ride, went through my mind, and I don’t want it to not work.

I hoped that I could cycle the part from Sharon’s cabin along the Elliot Highway to Fairbanks, but my tire went flat again. Something was really not ok and I wanted to fix it as soon as possible in Fairbanks.

Jade was cheerful. “What are you doing out here on your bike?” she said, chuckling constantly. “I’m going to write a book about all the special people I met in Alaska, you have to be in it,” she continued enthusiastically. Jade is in her early twenties and came to Alaska two years ago with her boyfriend Logan to build a log cabin in the outdoors. With some help from local residents, the cabin is now up, the rest went somewhat different than expected and Logan is now her ex-boyfriend and Jade will fly back to Virginia in two weeks.

I asked Jade to drop me off at Walmart for a quick fix and then I would cycle to a specialized bike shop a little further east in Fairbanks. Logan also happened to be at the Walmart and we had a cup of coffee while he explained that he was going on a deployment to the north of Finland. They were very sweet and the conversation was pleasant and to keep it that way I didn’t ask them about what exactly went wrong in their Alaskan adventure. They walked with me in the Walmart for a while, helpful in my search for what I needed to be able to do the fix. Too bad it doesn’t work out for them, they are so sweet and seem to fit together so well, were my last thoughts before our ways separated.

It was two days getting my equipment ready after the frigid start in average -30°C on the Dalton Highway. I also wanted to buy enough food for the trip of a 1000 kilometers from Fairbanks to Whitehorse in Canada. There was no time to lose because the temperature would be perfect the coming week, it didn’t get colder than -20°C in most places. That seems cold, but as long as the temperature is not colder than -25°C, cycling and camping works fine for me. 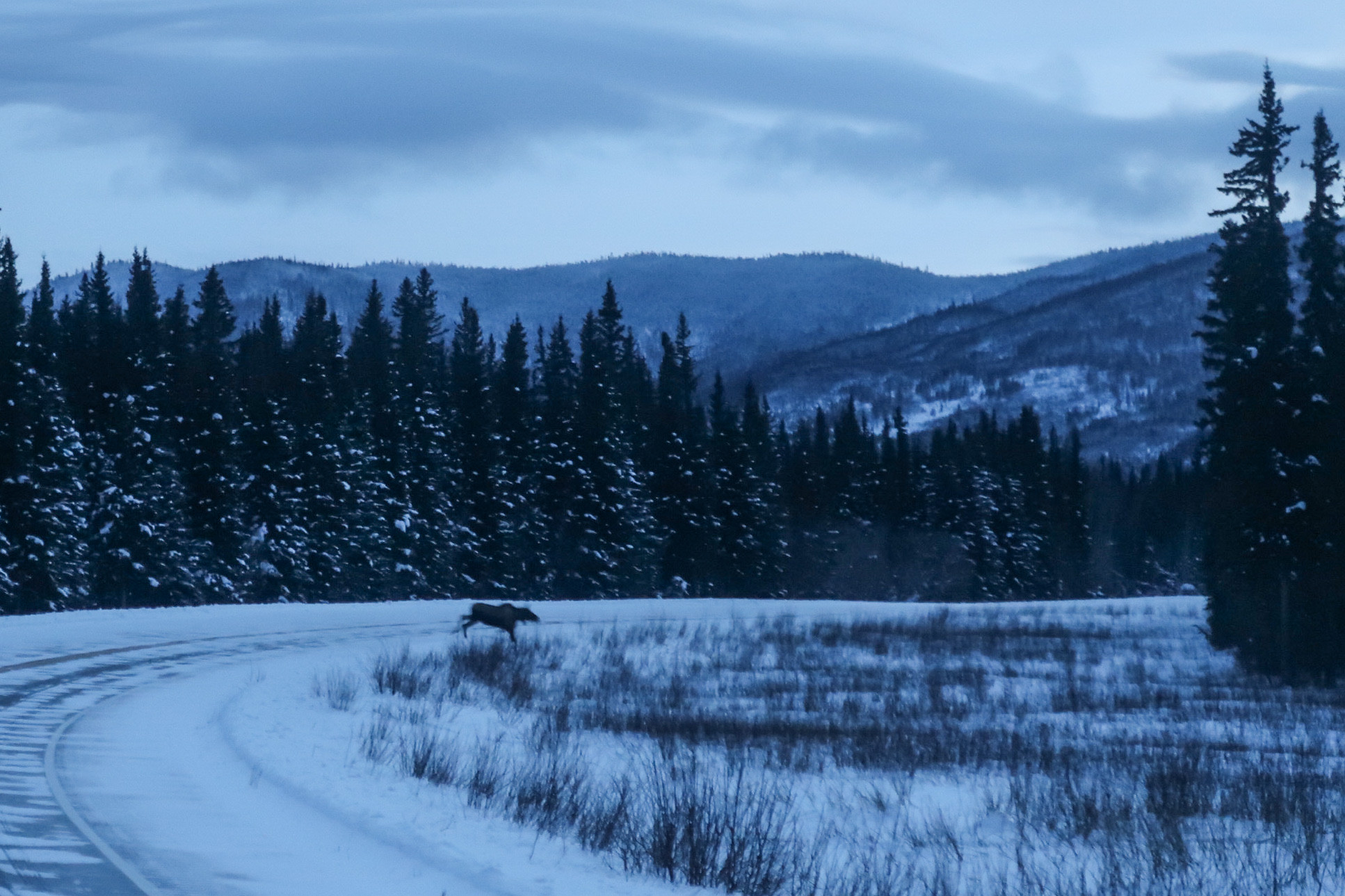 There was quite a bit to be fixed. To start like this in this extreme cold was, for me as a professional amateur, so hard that my head just wasn’t sharp. I really needed to get into my routine, to get used to the environment. The cold and mountains were immediately so confronting that it regularly exhausted me, took away my appetite and due to too little food I was simply not sharp anymore. A lot of things were not going well. I had left my camera bag with spare battery lying around during a photo with the self-timer. When I lit my burner I almost set my tent on fire and there were now two burn holes in it. My ski goggles had slipped off my handlebars during a mini break on a windy afternoon. At that moment I was so tired and upset that in a hopeless mood I stopped a jeep with Asian tourists on their way to the Arctic Circle point. They looked at me a bit glazed for the whole appearance and of course never came back with the ski goggles. Even though the goggles were an essential item in my kit, I noticed that the exhaustion at the end of a day really had a big impact on how I emotionally dealt with adversity. I made something reasonably small and solvable extremely large in my head, while it was really going to be okay. Keep moving was my motto, but not wanting to gnaw on frozen energy bars caused great damage to my moral.

At Billies Backpackers Hostel I was now the hero of the season. At the end of the second repair day, I was at last repairing a tear in the rubber of one of my Sorel boots, when suddenly some people walked in. “Henk! Is that you? Are you the person that is cycling!?” cried a lady I had never seen before in my life. It was like wildfire among the people who saw me cycling down the Dalton Highway. Billie from the hostel even called the Fairbanks Daily News and that same evening I got Haley on the phone for an interview. I liked the attention, it brought connection, even though I’m not really comfortable being the center of attention in a live setting, I thought it was a nice compliment. 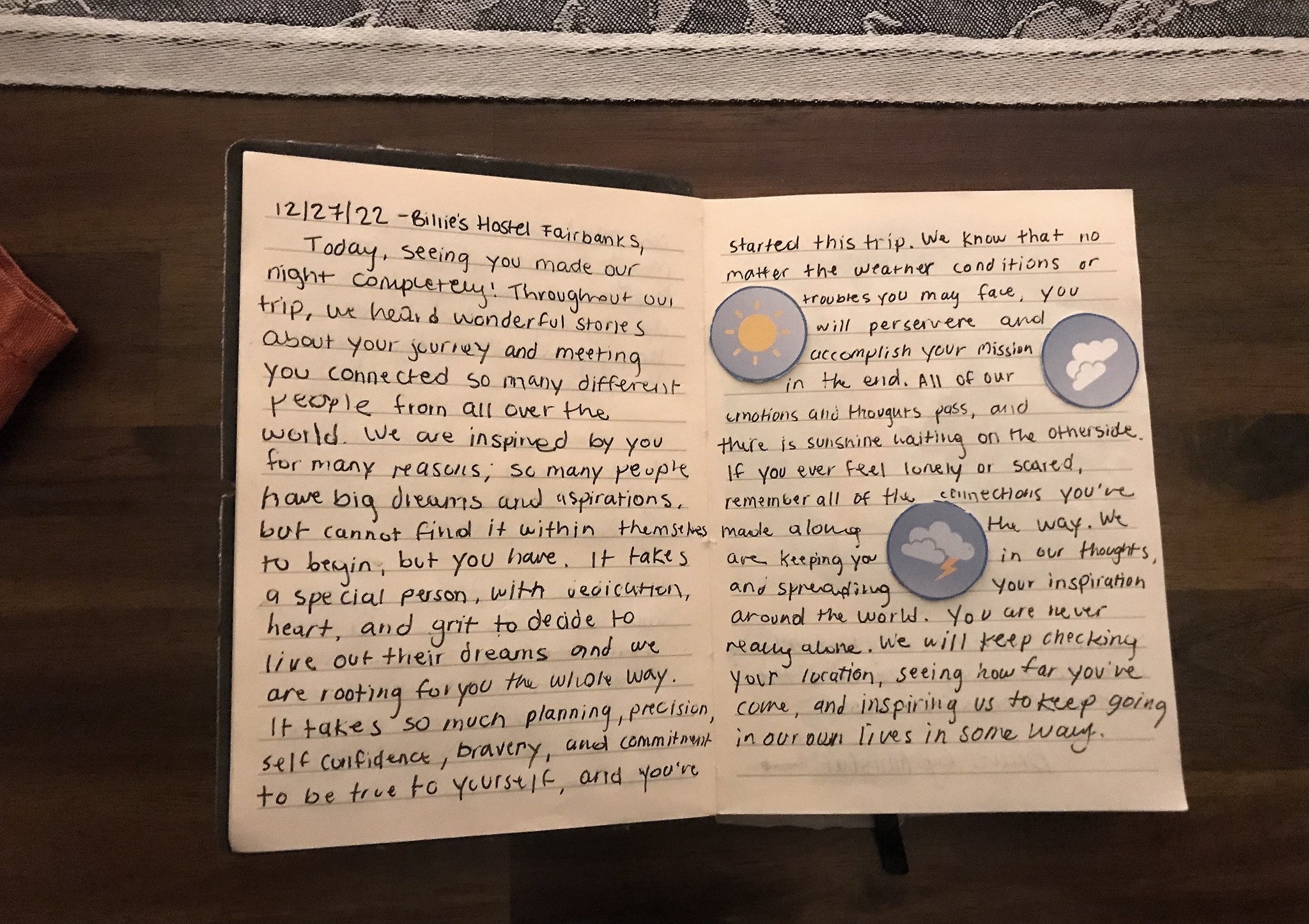 That night we watched a movie that once inspired me to seek out the free life. It was the movie Into The Wild. A true story of Christopher McCandles who renames himself Alexander Supertramp and sets out on a quest for ultimate freedom in the Alaskan wilderness. We had jumped outside in our underpants and bikinis in the snow just before the movie. And Billie from the hostel had baked a delicious fresh bread that we could nibble away so nice and crunchy. It was really nice with all these people around and how bad I had felt that first week I had almost forgotten. That night I went to bed a bit earlier than the rest because the next day I would be focused on my bike to really go for some mileage.

“You’re not from here otherwise you wouldn’t be riding your bike!” Said Jimmy with a smile in the Salcha Store on Richardson Highway. Jimmy came across as a sweet, pleasant man who liked a beer by the look of his belly. Later when I was organizing some things on my bike I came back and there was a plastic bag completely full of hand and foot warmers standing next to my coffee. 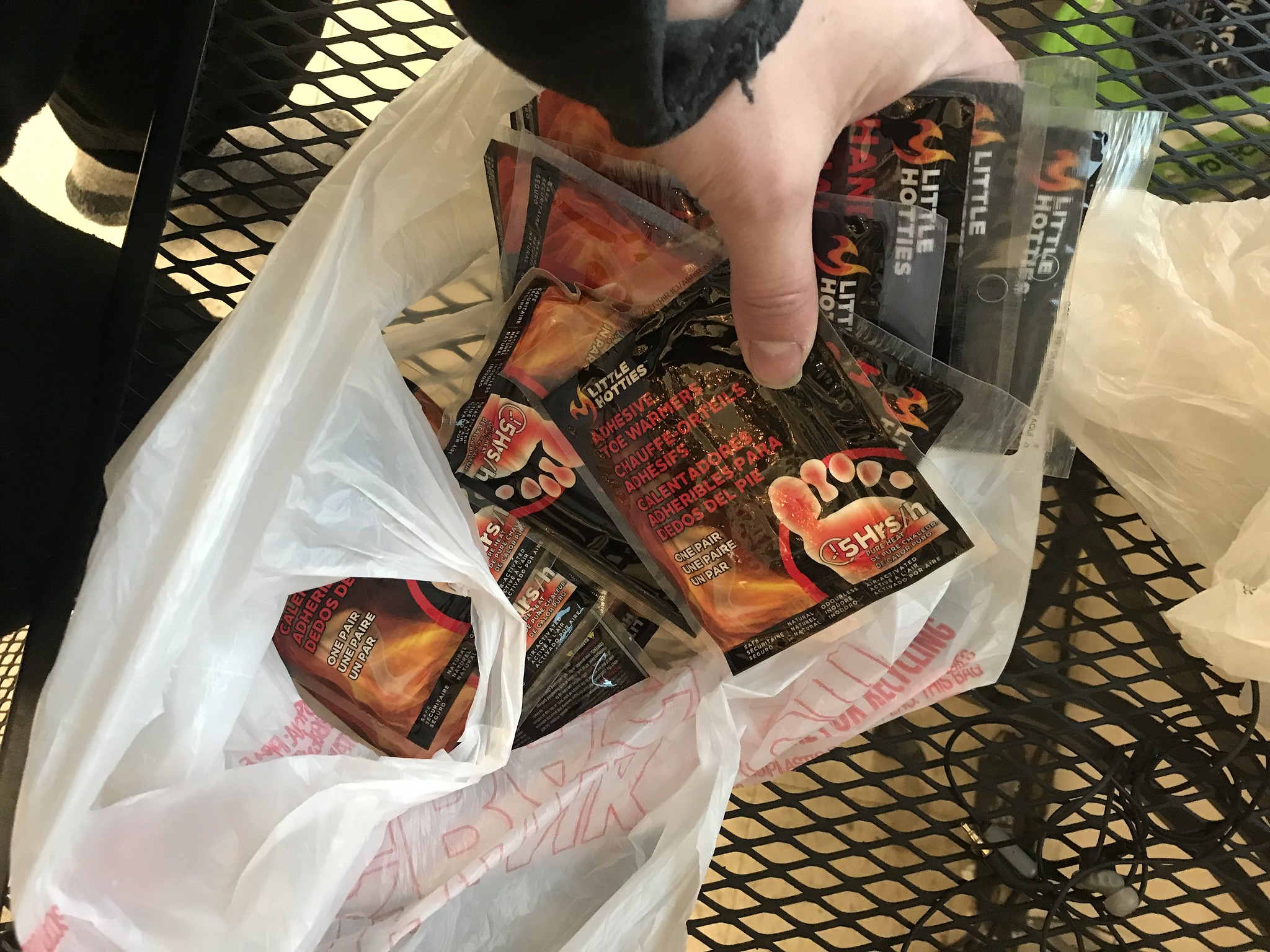 “What is this?” I asked the lady from the store in surprise. “That’s Jimmy’s, he often does things like that to people and then he quickly disappears himself.” She smiled as if she was proud that Jimmy had once again made someone happy.

That following days I celebrated the New Year alone in my tent. The moon shone brightly over the white snowy landscapes, and the light reflected so that it was not dark at all and without any light pollution all the stars were clearly visible. In my sleeping bag were Jimmy’s warm hand and foot warmers and I decided to treat myself to the military ration Tricia gave me at the Yukon River Camp. A Mexican stew, with pizza crackers, applesauce and chocolate milk with a touch of coconut. I enjoyed that and not much later I fell into a warm sleep with the explosions of fireworks in the far distance that heralded an adventurous year for me.