Curiosity brought you here: Home › Adventures › Cycling to the Alps (2020) › In the Dolomites

It’s a beautiful clear day and I just camped along the river Torrente Biois. Which name is as charming as the place where I putted my tent. In the tent I’ve read some of the book Family Happiness and fell in a wonderful sleep with the noise of falling water on the background.

That morning I cycle into a small village with also a charming name that I wouldn’t remember because it’s so long, Cencenighe Agordino. Most what’s in Italian I find charming. The language, pronunciation and especially the passion of cycling in general. It’s not rare that someone takes out his phone and start filming me from their car with a thumbs up while their partner is looking all stressed because it’s happening on a mountain road with often snow and ice on it. 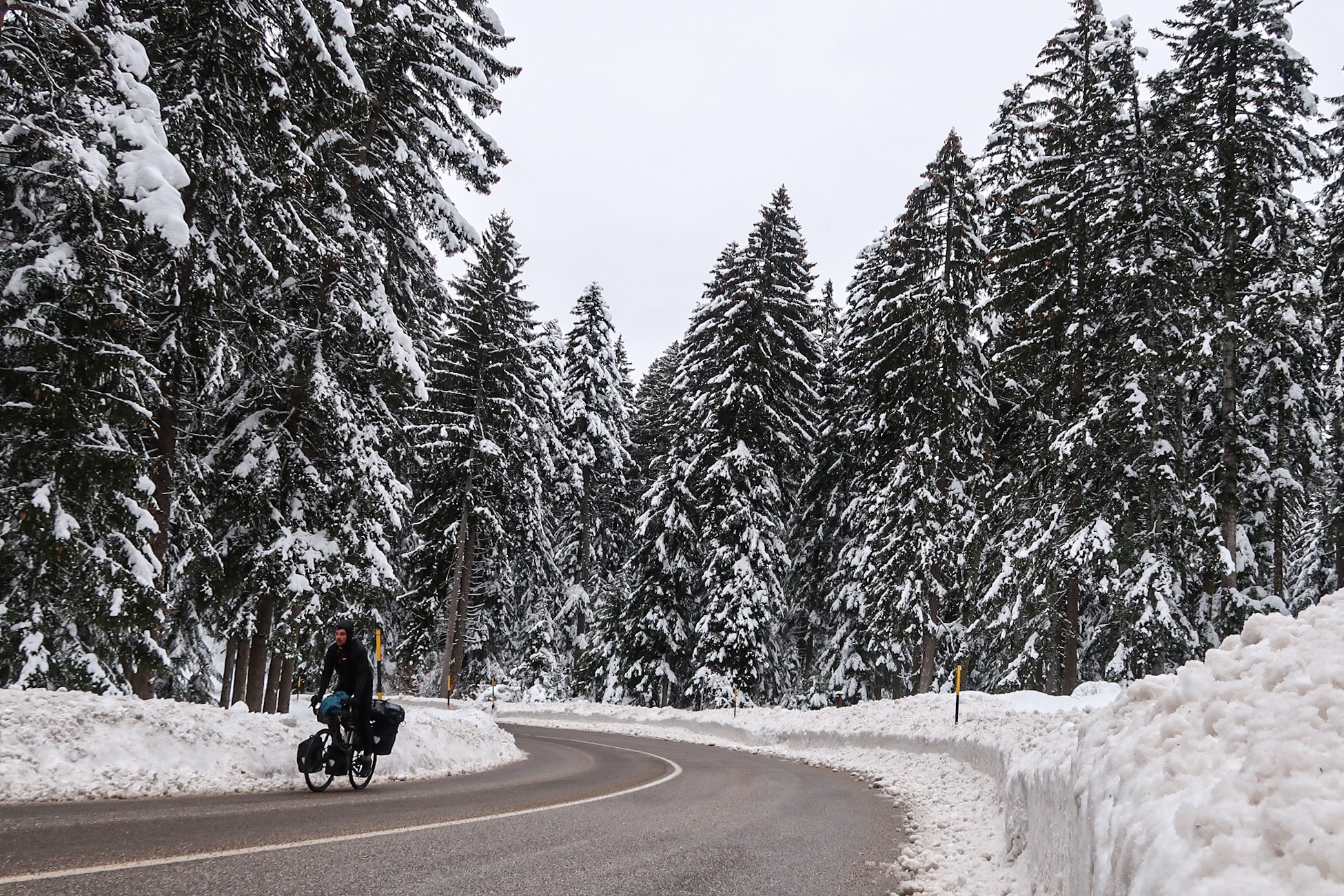 I enter a small bakery where a middle-aged woman is taking care the cashier and a younger lady is packing all shorts of bread for the customers. I skipped breakfast this morning because the day before was a Sunday and all shops where closed. I ran out of food and had only taken a muesli bar this morning. I ask wether one of them parlare inglese but both nod in disagreement. So I take out my phone and translate that I want the bread which is longest fresh because I take several of them up the mountain pass. My eyes fall on what looks like a giant cookie with all dried fruit in it. I point out to it and ask for one also but the giant cookie turns out to be eight euro! But I’ll need it for the climb so I get all my cash which is not enough but they make a sweet gesture that it’s ok and I can take it with me for less then it actually costs. I smile and enthusiastically tell them with cycling gestures that this is going to get me on the Passo Falzarego. At that point they both look very surprised and the younger one is saying with some gestures: “Chiuso Falzarego chiuso!” She shows me a photo to proof that with a road sign from the last days saying the pass is closed due to the heavy snow.

Well damned, I think to myself. The road worker I asked ten minutes ago said it’s open. Who am I going to believe? I can’t go up 30 kilometers and then see the road sign for myself. I thank them for the giant cookie and the news that have made me all confused about what way to go. 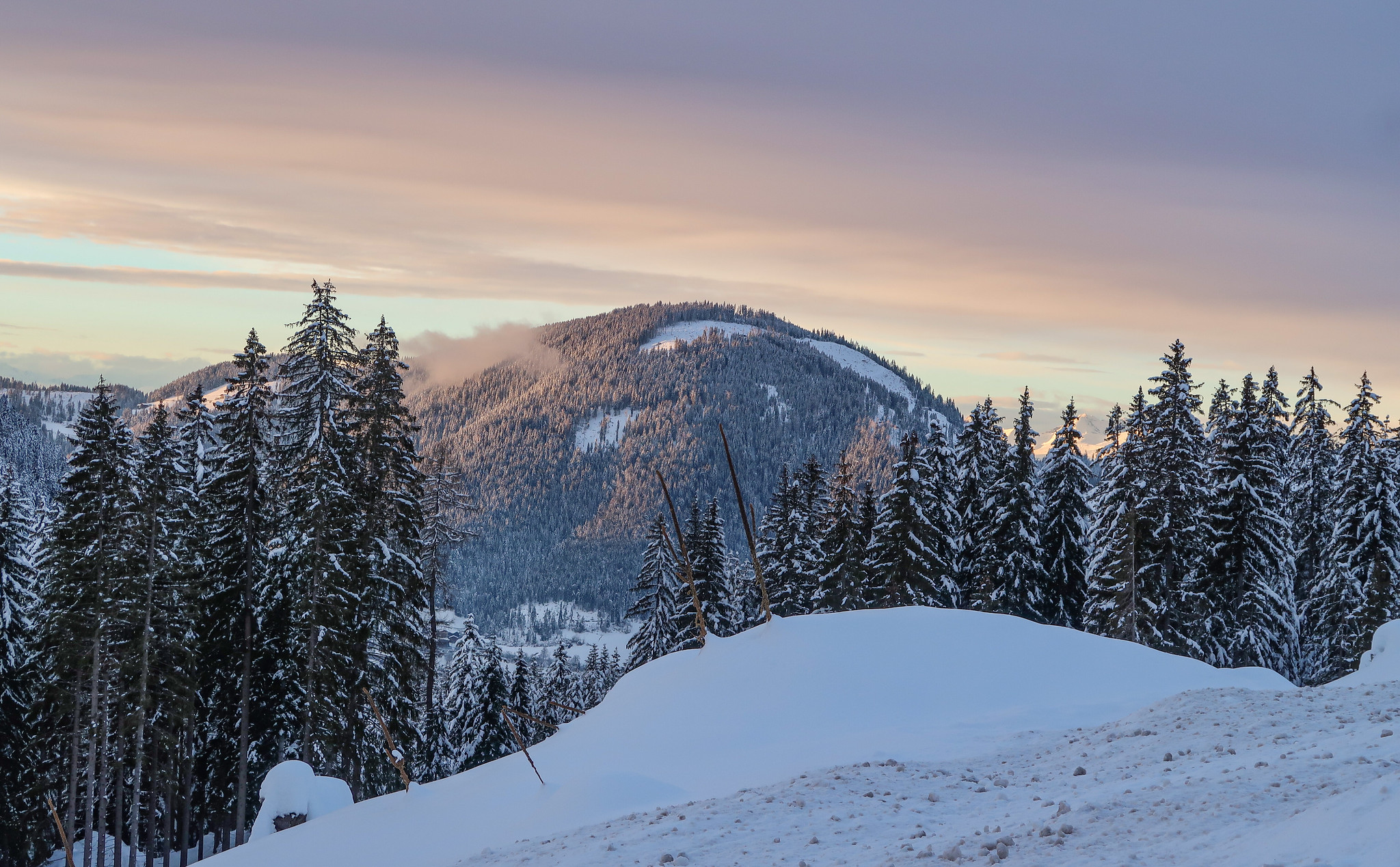 So I decide to ring the bell of the caribinieri station which is the Italian police. A ruff looking men opens the door and yells something in Italian. I walk up to him and he stares at me like I’ve to show it was all very worthy for him to come out of his office. I ask him in my best Italian if the Passo Falzarego is aperto o chiuso. He winks me inside and points at a sofa to sit on like I’ve just been arrested. I’ve a weird feeling from the masculine approach from the men but see no point for real worry. He start to do a phone call at his desk also with a kind of yelling in the phone. The phonecall is very short and then he walks up to me saying with a deep voice that the passo è aperto. My heart comes in great joy but I don’t show it to him. He escorts me back outside sees my bike and points at it laughing like, really you gonna do it by bike? He shakes his head and wishes me good luck.

Normally I wouldn’t be impressed by such a reaction but today I’m also a little excited about what’s coming. It’s cold, the pass is over 2100 meters and right now I’m only on 760. Snow is everywhere because of the heavy snowfall from past week. At least I’ve the right information and I can go without the risk of being put off the road by another officer. 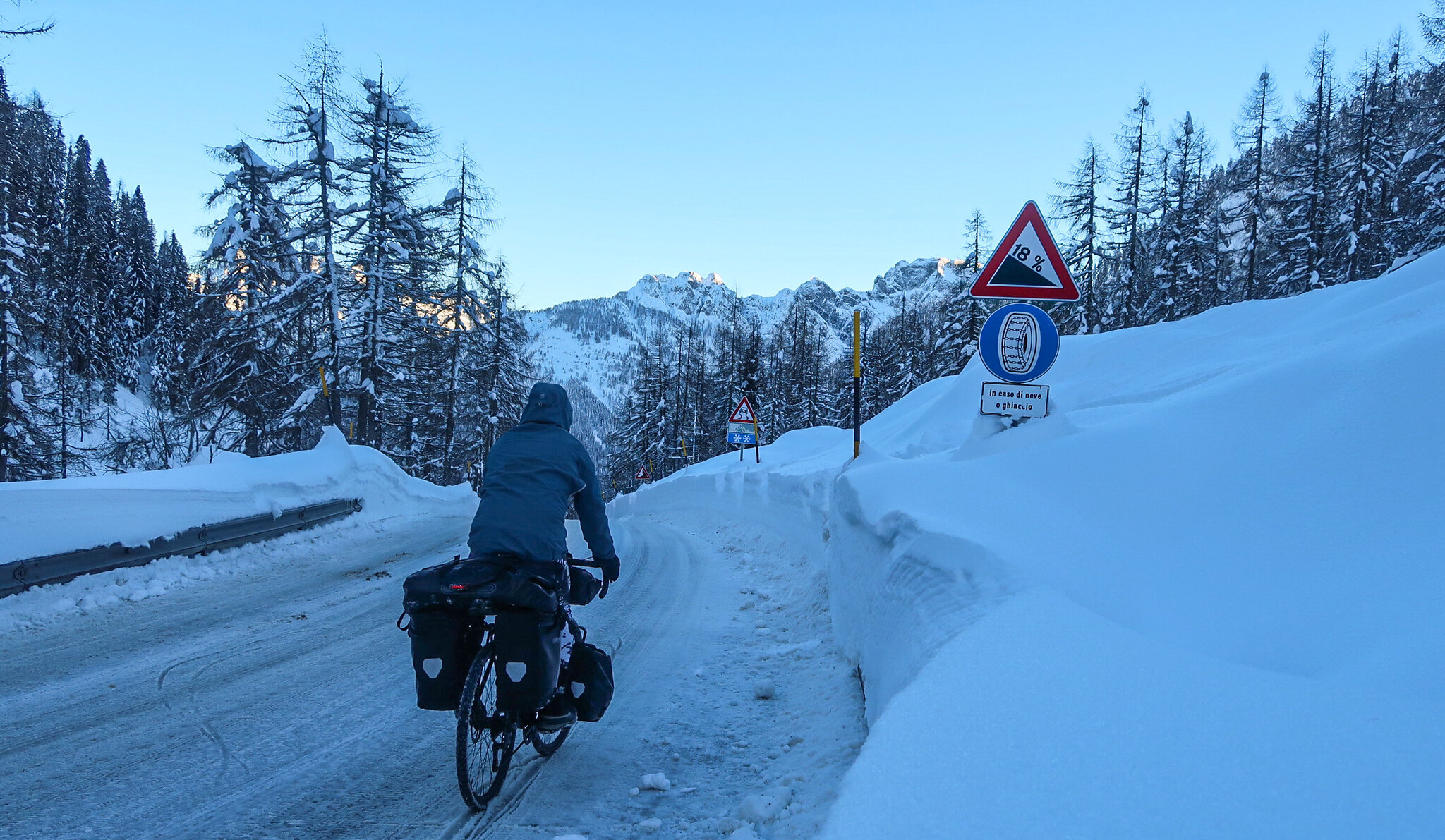 Up the road is going. And I think of all passes I’ve been through. It has been an amazing journey so far and Italy is just incredible. In Bolzano which to my surprise was a town with more like an Austrian culture, my bike was given some repairs. A talented bike repairer took a break from his other bike repair work and fixed my gears by replacing the cable to the back cassette. This was needed because after the Passo del Tonale and the Passo Mendola which took me right into Bolzano, the next pass was the Passo Costalunga up to 1752 meters and now I only was at 200. I was going to climb the almost 1600 meters and that wouldn’t have been possible without good working gears. They all jumped from the one to the other and I wasn’t been able to fix it. Happily this person could do it otherwise I probably had to walk for two days to get to the top.

“Some time ago there was a strong wind, a very strong wind.” this words came from the woman at the landesreitungssverrein in Welschnoven. I asked if I could dry my sleeping bag inside because I wanted all my gear to be dry when approaching a mountain pass at sunset. It wasn’t a problem at all and know I was sitting here drinking tea with the woman. “That wind was so strong in the valley that it took down a lot of trees, you will see it when you continue the pass.” she continued telling. “Nobody really knew it was coming and suddenly it was there but nobody got hurt only some trees fell on houses.”

The power of nature, I thought, is so strong we hardly can be aware of it. It’s both scary and liberating at the same time, like this journey or maybe even like life itself. 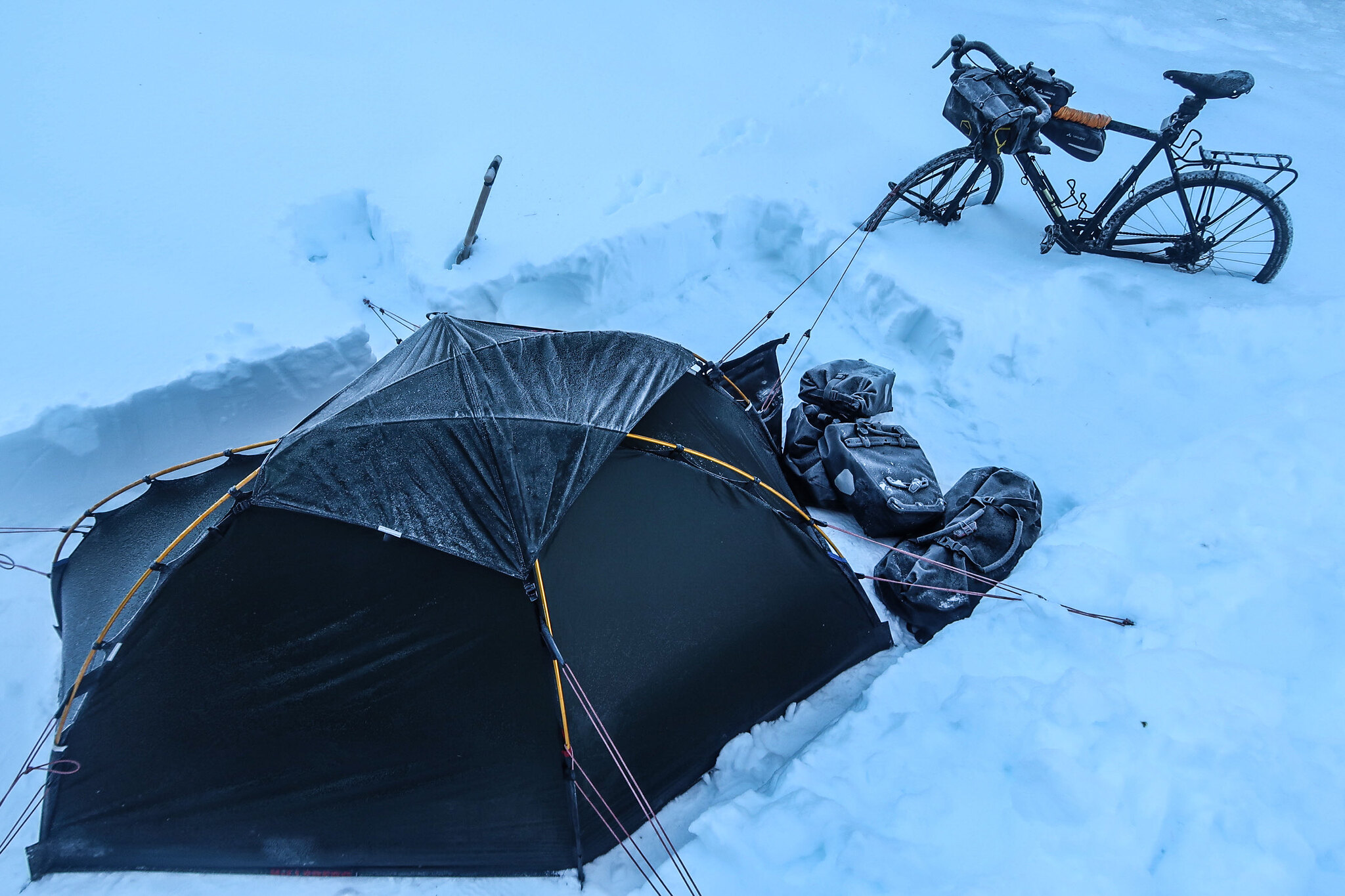 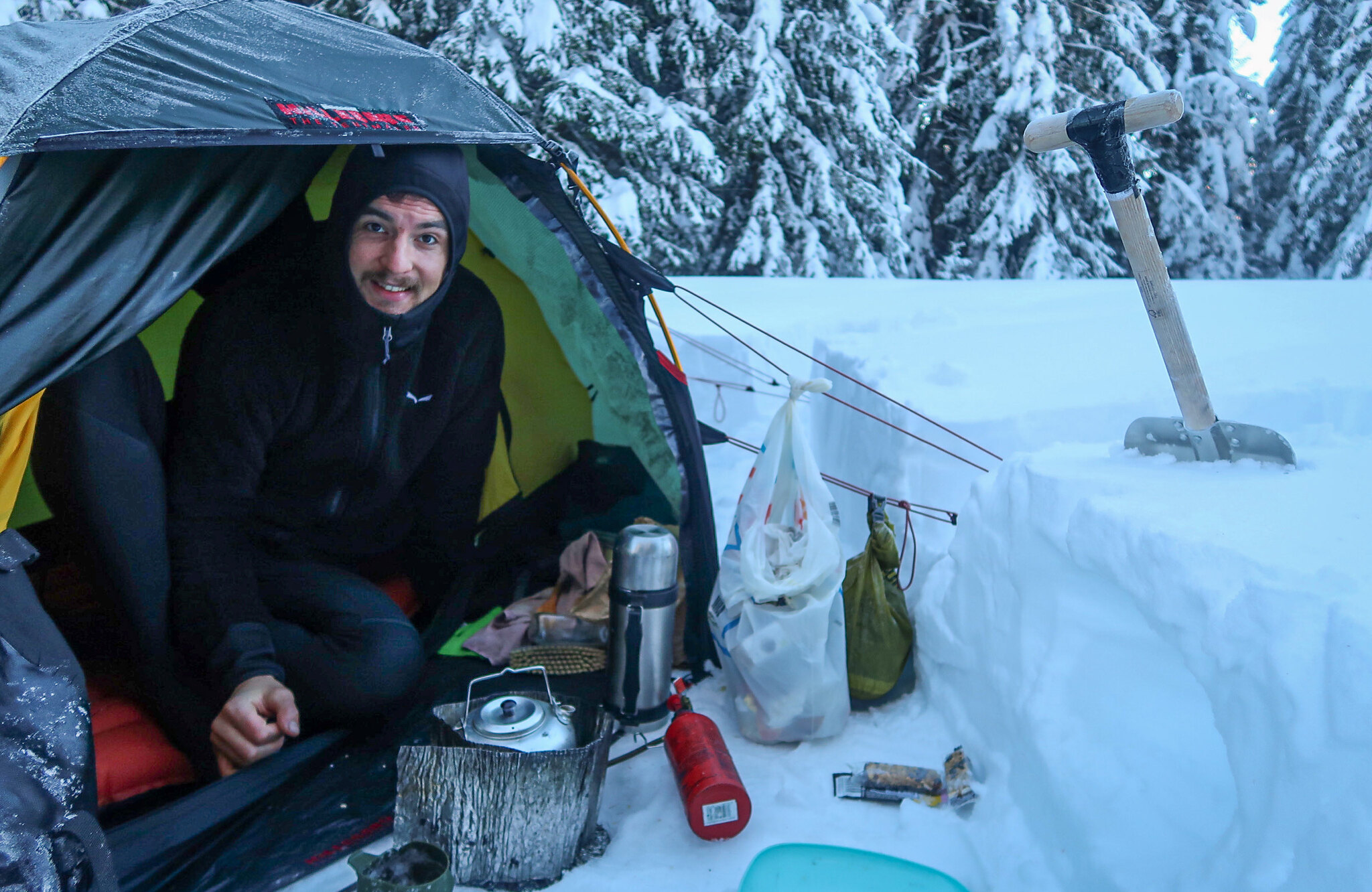 She went to sit a little bit more straight, looked at me more intensely and then said: “Are you nog afraid of wolfs?” Wolfs!? I was yelling in my head. “Are there wolfs around here?” I asked her in some surprise. “Yes,” she said, “with sleeping outside, aren’t you afraid to encounter them?” I didn’t at all thought about wolfs and bears or any other animals. It’s so rare to see them and if so the chances for an attack aren’t that big. And that’s what I explained to her. “I ain’t afraid.” I said and I ment it.

That day, after getting a yes-word from the masculine police officer in , I got on a road to Alleghe. There is an electric road sign which show all passes like Pordoi, Ferdaia and Falzarego with a red dot behind it. I yell at the signs that I know they are lying. There is this weird feeling of excitement that I so much hope the pass is open but also from that temperatures drop to -6 Celsius. And there is another road sign which also says the pass is closed in a big red area but I keep going. I put my every trust in that yelly police officer from Cencenighe Agordino. 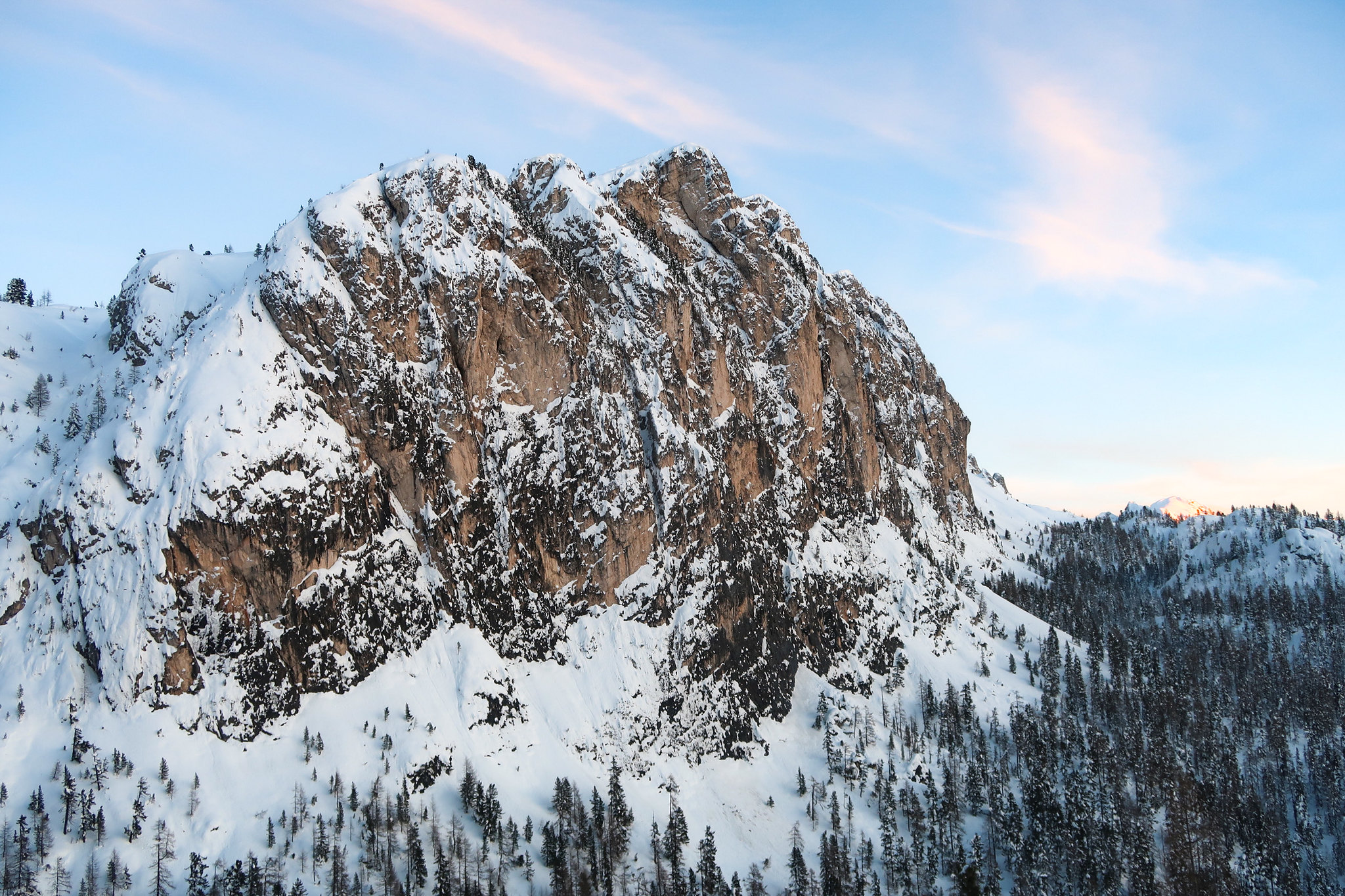 Towards the top the roads are all slippery and icy. The sun disappears behind me in a sea of mountains. She makes beautiful colors on the rocky high mountain peaks around me. When it is almost dark I reach the top of the 2117 meters and change into dry clothes because of the sweat of the climb. I descend about 100 meters but it soon gets completely dark and I decide to look for a place to sleep along the road deep in snow.

About 50 meters from the road I start digging with my shovel in the more than three meters of snow. I’m tired from the climb but take another energy bar that gives me full energy again. Today I’m going to sleep in what I think is for me a record layer of snow and even though I’m tired from the climb I’m all excited to make the most beautiful snow castle ever!