There I am. At the airport in Amsterdam. After a 14 hour flight from Singapore. With a big smile on my face. And yes, he is there too, my worn-out bike that I have taken out of the box before I walked out of the terminal. Lisa took a run to me. My family was cheering and clapping. Before I got a little sence of what was going on, there was a microphone in front of me: “And Henk, what’s going through your mind? Now you’re back in our cold little country after a year cycling?”

I took a look again around me. What was going through my mind right now? What a question. I had no clue. I was home again. Back in the Netherlands.

“Home sweet home,” I was thinking.

On 21 January I arrived in Singapore. In Singapore I would stay for five days before I would fly back on 26 January. Perhaps the five busiest days of my entire journey. At first, I was invited to drink coffee with the Dutch ambassador in Singapore. 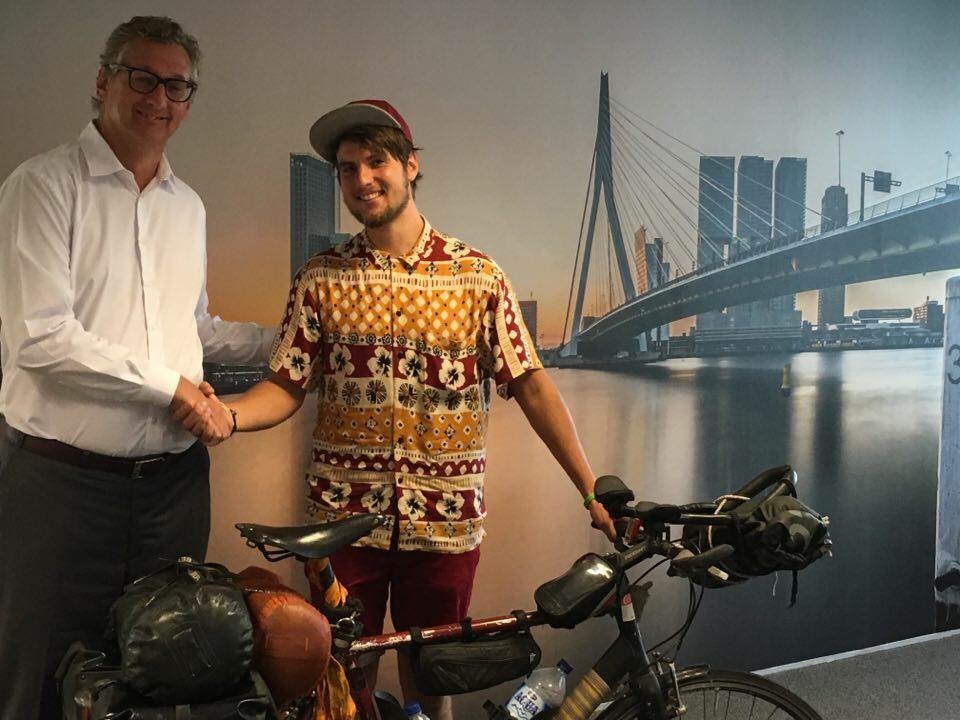 The World Fund for Wildlife in Singapore had pitch me on the Channel News Asia. On 25 January, I did a live interview on the their morning news show.

It all was fun. Through my blog, there were several people who sended me an invitation. “I’m a Singaporean who has been following your blog. I would like to extend an offer to bring you around Singapore.” Sure, why not?

In the first days I stayed at Sk, in his hostel Tree in Lodge. He helped me a great deal with a box for my bike. At one point his hostel was fully booked. I even slept on a wooden bench for a night in the living room. I never really make a reservation. It’s having luck or arriving at a fully booked place. I decided to move to a comfortable place for the last days. I dived into a chic hotel. The funny thing was, the staff recognized me from the interview on Channel News Asia. They all wanted a picture with me.

And unbelievable, when I left for my airplane they gave me this sweet little postcard. 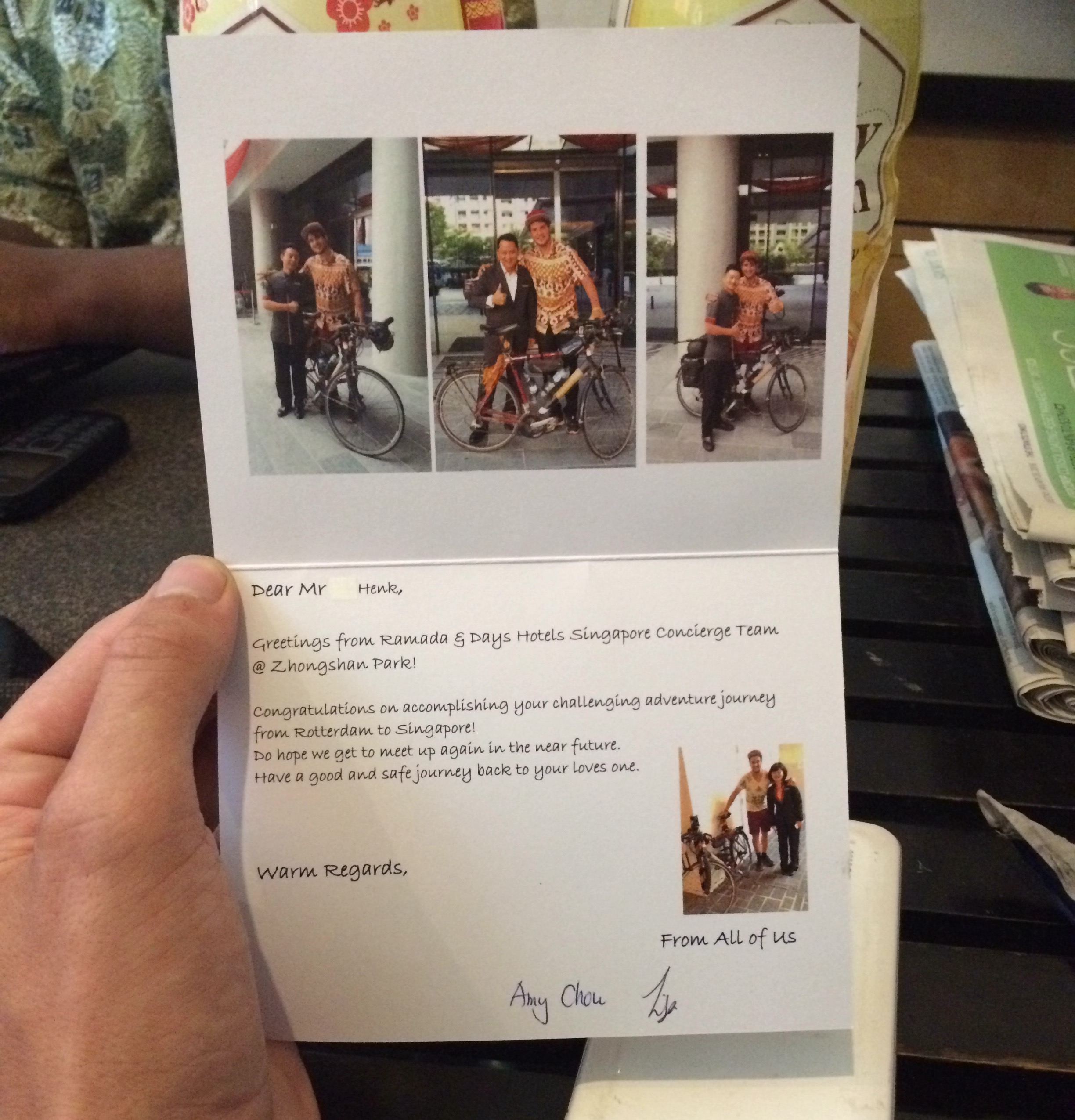 The last days went fast, and before I knew it I was entering my final flight form Helsinki to Amsterdam. With tears in my eyes. With the feeling that it was all over. The feeling that I’ll be in Amsterdam in a few hours seeing my girlfriend and family again. In real life. A journey of nearly a year on my bicycle I finished with a return of just 14 hours by plane. I could barely realise it when I took my first footstep on Dutch soil. And before I knew it, a journalist asked me how I felt now that I was back in the Netherlands. To be honest, I had no clue. It’s just a strange feeling as a year like this passes by so quickly. Everything was new. Every day I was looking for a place to sleep, for food and drinks, the hospitality of people, meeting strangers all the time. And now, back home.

A frequently asked question: “Henk, what are you going to do now?” I always swing around that I’m going to write a book about the adventures I had. I’m actually going to do that. I’m going to work as a barkeeper at the Wunderbar in Rotterdam. Come along if you’re in the city!

And what about this blog?

Don’t be afraid that I stop taking the time to write good articles. I continue to share stories about how it’s like to go back into a daily life with a job. Off course, I continue to look for adventure, here in the Netherlands or in Europe. Because let’s be honest, here it’s flat, cold, rainy and not so nice as the most places I’ve been the last year. But I believe that there is always something to do somewhere. A good example is my friend Erwin. He is walking in the rain right now. Walking the border of the province of Groningen in the north of the Netherlands. I’m going to join him next week by walking along for one day.

The best way for me to get things in order is to set goals. Otherwise I probably fall into a big black hole. I’m going to think about what things I want to achieve in de upcoming year. One of the goals is to find a permanent job. Within this I want a healthy balance between a daily routine and regularly have the opportunity to go out somewhere doing an adventure.

A new challenge. Well, I’m ready for it!