I left St. Moritz Bad to go on with the journey and crossing the Bernina pass, and to enter Italy after that. I couldn’t stay for too long in Switserland because the prices in this country where a bit too much. It was a beautiful bright day and I got all confident to continue cycle up to 2330 meter. Just before starting the climb I changed my rear tire for a more winter proof one and got rid of the mudguards.

A lady who walked up to me had warned me about much snow coming over the Alps this weekend. We exchanged some nice thoughts. She understood perfectly why I was here. She had lived in the south of the Netherlands but had came back to the mountains. And I perfectly understood that. It’s so much overwhelming to be here and it’s all good for the ego to look up to such big rock formations. Whatever I want is up to them and the sun and clouds which accompany them and they all say exactly what’s going on. Life in the mountains is more of a challenge. With challenge comes hardship and to overcome that would give the greatest rewards. It creates power and strength. It’s like that they are saying to me: “I’m a mountain and I’m strong. The sun comes and comforts me, then clouds surround me and bring darkness and snow. It all comes and goes, comes and goes, all the time. And I’m just staying here being a mountain permanent and eternal.”

I got up to the Bernina and it was wonderful. The bright clear day, the blue sky and the small clouds in the distance. 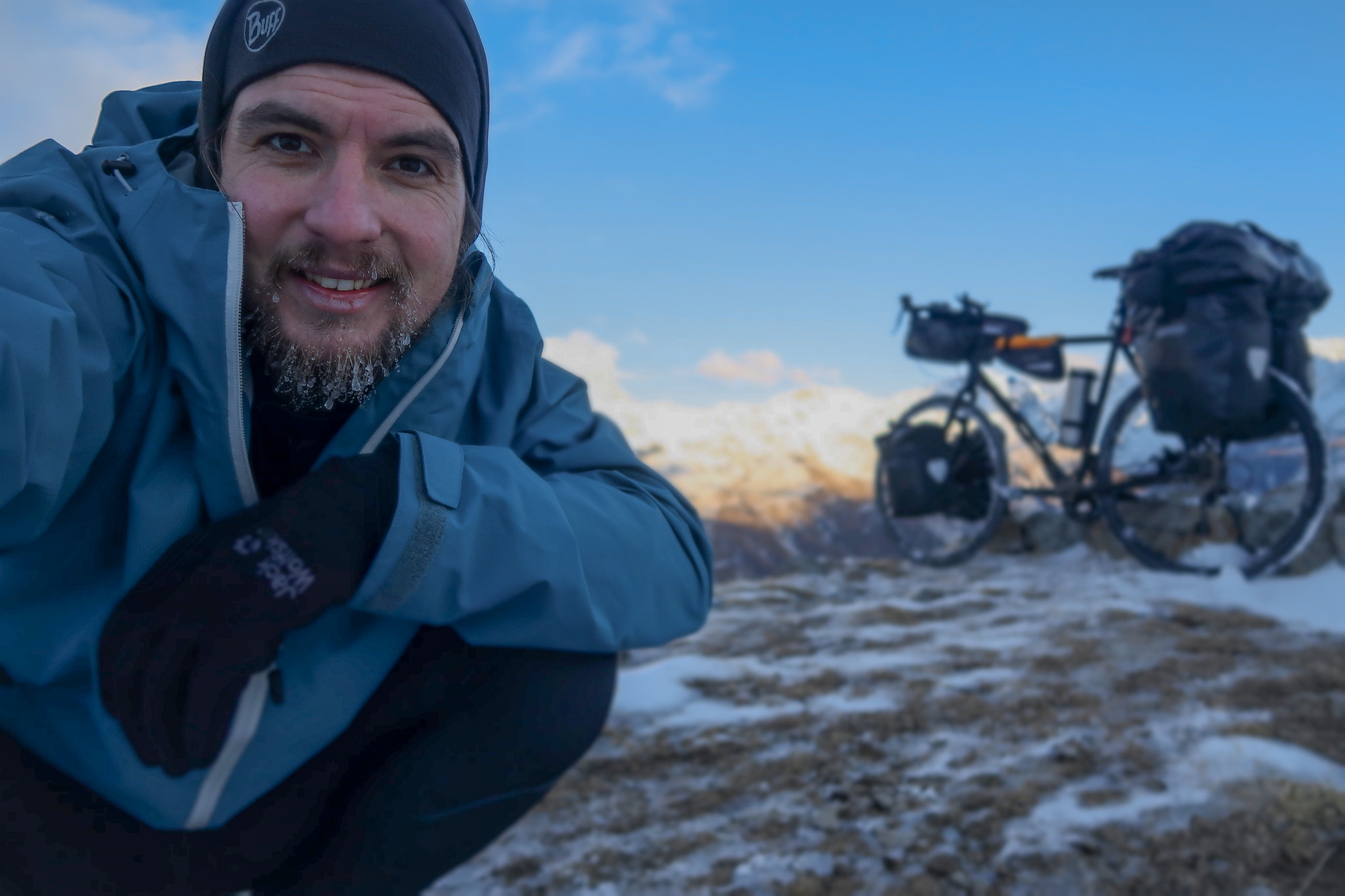 But I had to be careful. Up there I got a weird feeling, like my body was telling me something. I forgot to change all clothes right away. I panicked for a moment and then quickly did what I had to do earlier, changing my clothes and covering the most of my skin and face to avoid my skin being in the open in the cold mountain breeze. Then I let myself go on the descent which was very cold and found a nice place to camp and builded a small fire to warm up. The next morning everything was surrounded with snow. It was the starting of one of the biggest snowfalls in a long time in the Alps. And I was right in the middle of it.

After the descent that morning there was the Italian border with the customs. One of them checked my passport and the other one stared very long and intens at my tires. He then looked at me and asked something which I didn’t understand. So I didn’t know what to say and started to explain all different tires which maybe made me look like a salesman. He looked at me confused. It was very awkward but now I had arrived in Italy.

The first and most interesting plan for me was to try and cycle the Stelvio pass. But soon I got to know that the snowfall wouldn’t stop for days. Cycling alone was to become a hard challenge. I came from 500 meter which was all wet and rain and then climbed and climbed until rain got into wet snow and further until temperatures where kept the snow from melting on my clothes. 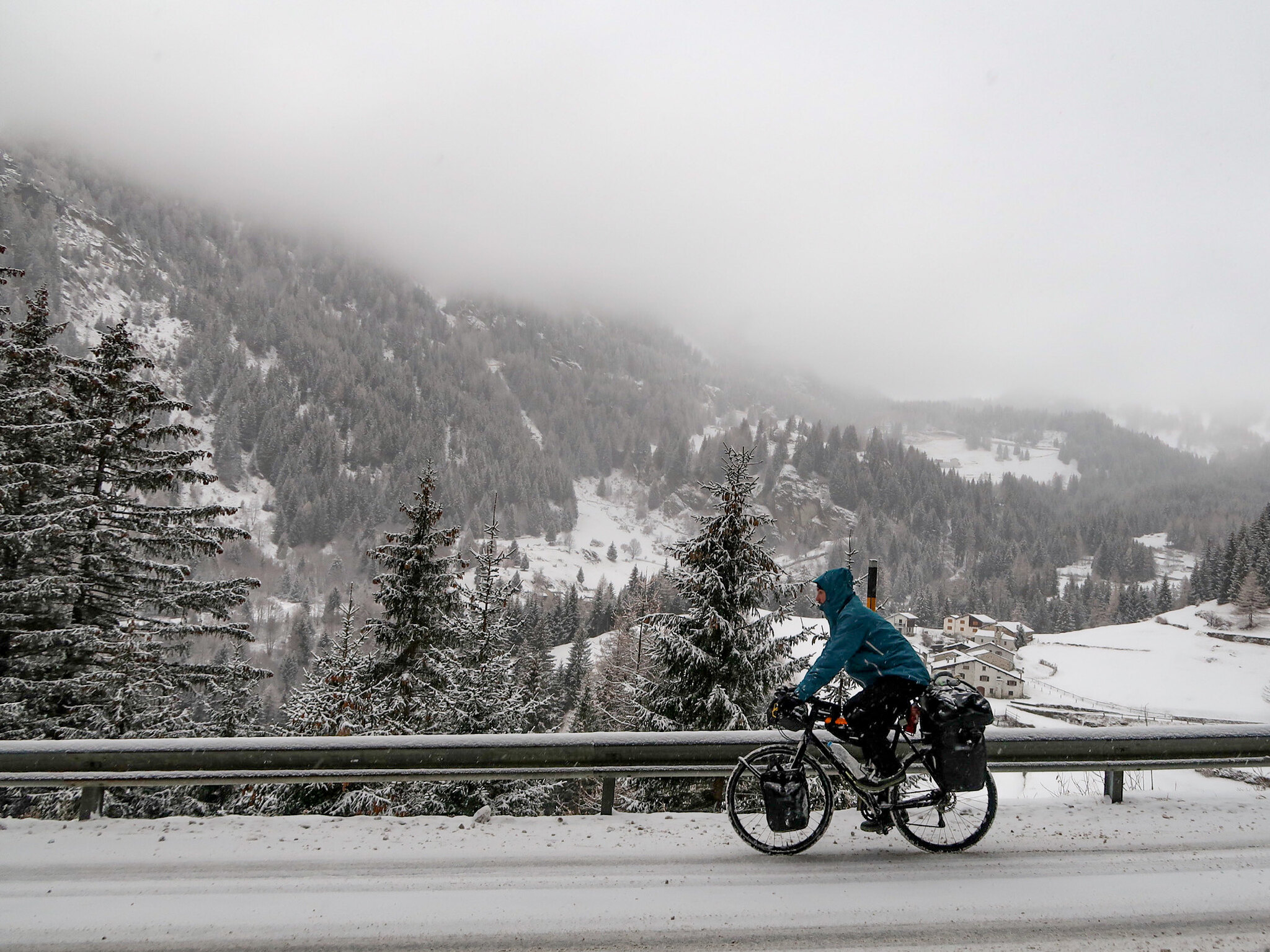 I found a campsite under a viaduct which kept me from getting wet. The next morning the snow had become again rain becomes temperatures had rise. I got all up to Bormio at 1225 meter with snow again but I’ve had to make the decision to turn back because the heavy snow didn’t stop. Even the police pulled me over to ask what I was doing here. So I got down from snow into rain again to 500m and up again into snow for the Aprica pass at 1200 meter. I just repeated over and over to myself, just keep moving, just keep moving.

When I was at the Sigma supermarket in Aprica a local hero asked me where I’m from and putted me in his hotel right away! A room all equipped with kitchen, hot shower and king size bed. This I really couldn’t believe. What a blessing it was after a hard day! The next day I packed all me gear which was now dry and continued cycling in snow along Edolo. A woman walked up to me and said: “Sei molto coraggioso!” Which was the Italian words to tell me that this what I was doing was very brave. But there were also people who looked at me, and shook there head while probably thinking: “why is this world full of stupid people.” or even some people just laugh at me like I was some big joke. But most people showed encouraging signs of respect and some of them even take a photo for I don’t know what purpose.

In Edolo it was wet again but I started climbing further to the in Italian called, Passo del Tonale. A pass which was 2000m and all year open. A group of young people got all on there balcony to shout at me like they were all crazy people you see on TV with those Giro d’Italia races. I couldn’t now what they were shouting because it was all Italian and just waved back at them.

“November was looking wonderful but now it all changed. This isn’t usual, even the electricity has gone down in this part of the town!” said Omar up in Ponte di Legno speaking about winter which had come which now had come with at least five days of continues heavy snowing. He would invite me for lunch in his family house but with the COVID-19 I could stay to hide a bit for the snow in his barn. He brought a lunch with a sandwich, banana and some chocolate. It was ones again hardwarming, I’ve been treated really well by people here in northern Italy. 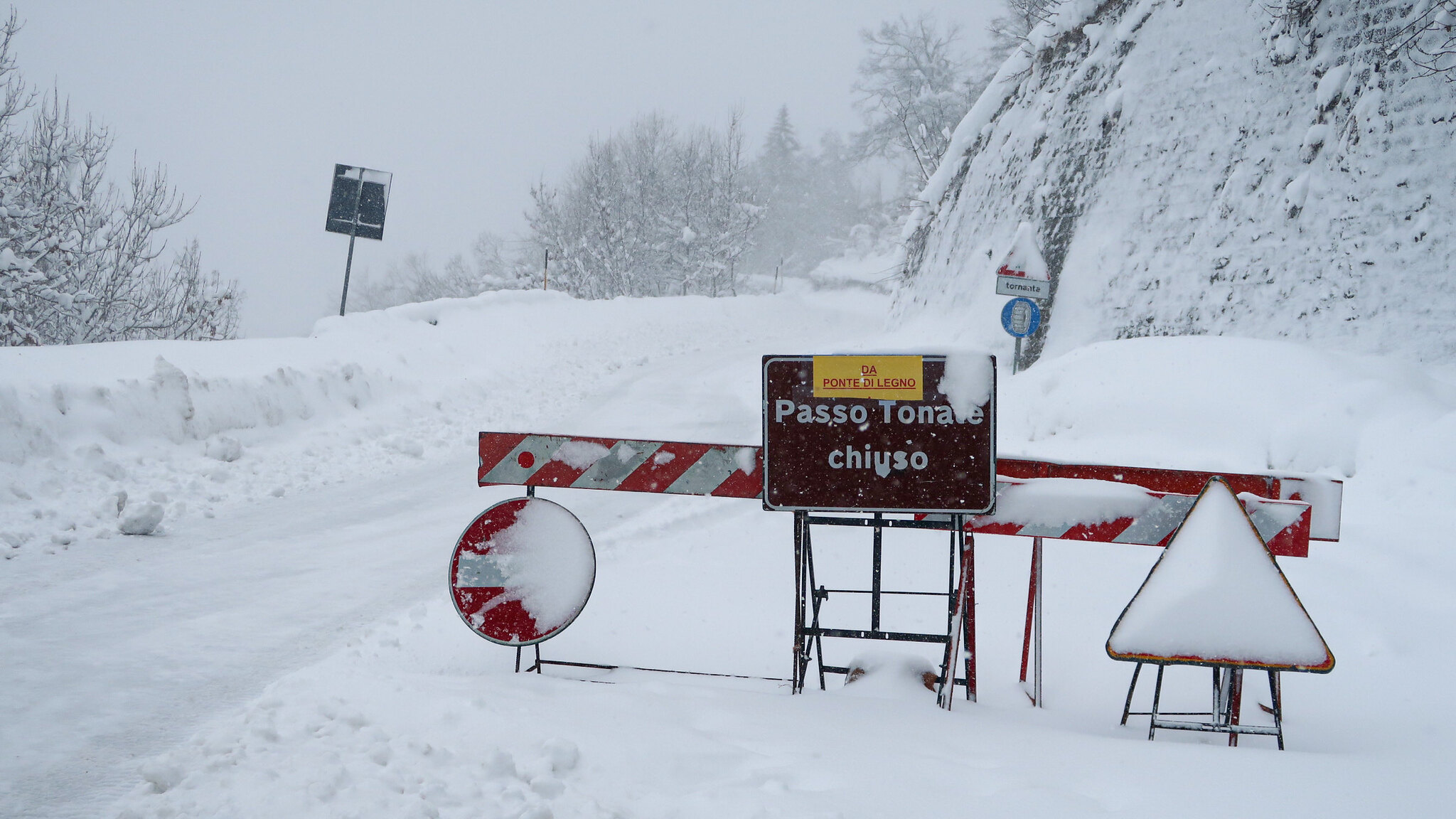 So that’s the situation, I’m waiting in Ponte di Legno for the Passo del Tonale to be open. And that is going to take at least two days. Upcoming days it is expected that the snowing will decrease and even stop at some point. So I’ll keep my fingers crossed and hopefully can continue soon.