Curiosity brought you here: Home › Adventures › Cycling North America (2023) › Alaska › On a bike over the Dalton Highway in temperatures of below -40°C

One of the truckers at Coldfoot Camp called after me at the start: “That’s going to be a chilly ride!”

I didn’t expect that the start of my journey on the Dalton Highway would be my toughest leg of cycling ever. The temperature stayed below -30°C for days and the climbing of the mountains and hills made cycling extremely tough. The heavily packed bike and the climbing made me sweat and when I cycled down the chills came from the icy wind. I was constantly busy with the layers of clothing, then the weather would become too cold and then too warm again and sometimes I made the mistake of staying in my windproof jacket for too long. A break was very uncomfortable because the cold was immediately felt when I stopped moving. That made it even harder and during this constant battle I nibbled on dry crackers and the frozen protein and granola bars.

I had to perfect my routine and know exactly when to do what.

Keep moving was my motto and even a short tea break turned out to be very uncomfortable. Too little food and drink cut into it and ensured that my motivation to keep going was hard to find, especially later in the day. Certainly I was also grateful that after years of planning and dreaming I was finally allowed to surrender to the challenge of the nature and splendor of the Alaskan winter wilderness. 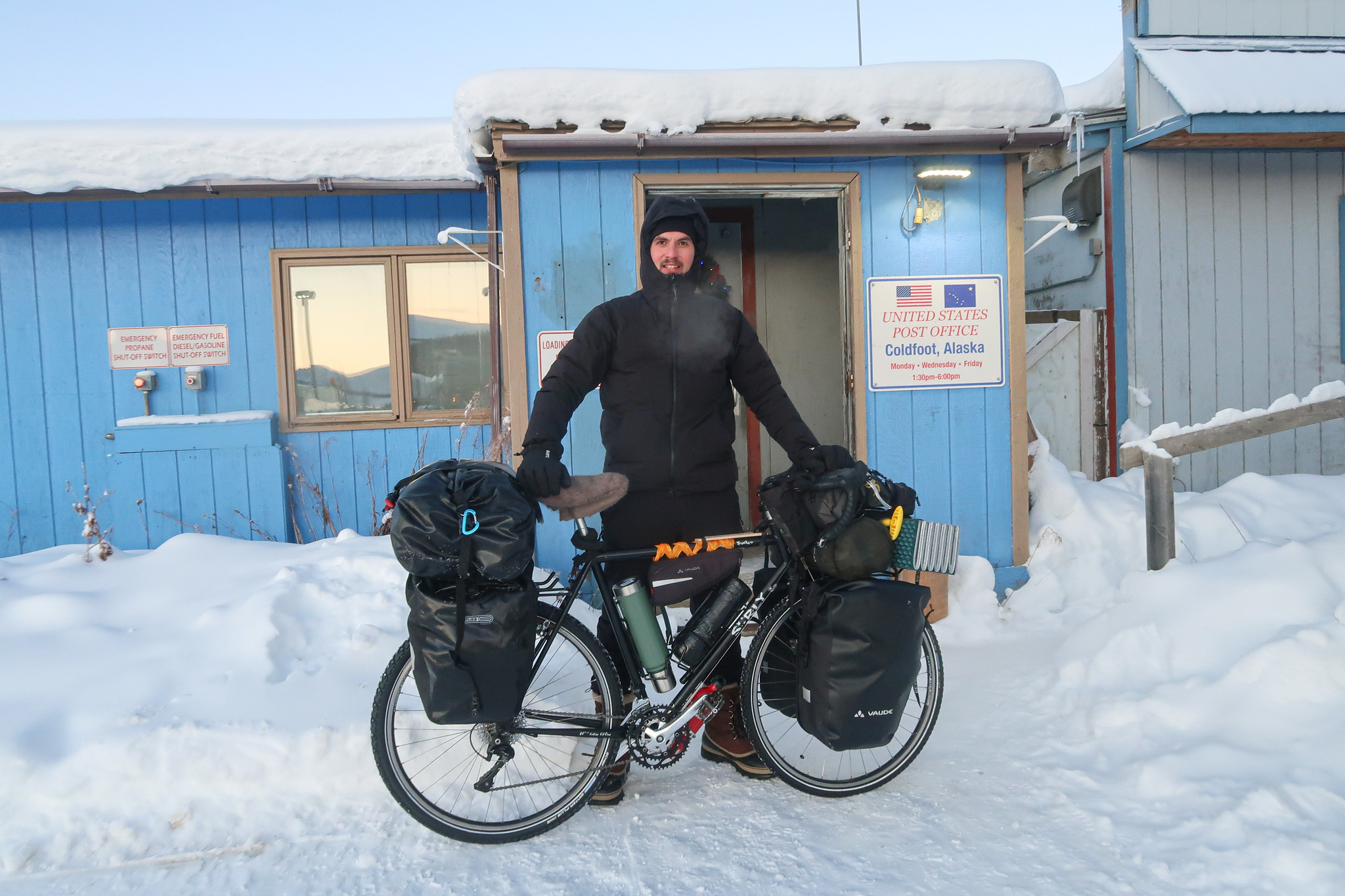 After Billie’s Backpackers Hostel I was allowed to stay two nights with Michel, who gave me his garage to use. Michel let me know that Sharon, an avid cyclist and host for cyclists, lived north of Fairbanks along the Elliot Highway. I contacted her and she quickly replied that it actually suited her. She even suggested taking me north for the cost of gas. We agreed that I would start at the Arctic Circle point, but when we arrived there, the tank had to be filled and we drove on to Coldfoot Camp, which is halfway along the Dalton Highway. With a few calculations whether I would have enough food and drink for 380 kilometers of cycling in extreme cold, I decided to start my journey there.

I had already made a few mistakes, so I often left my things lying around and tried to make a fire that night. That was hard work and I was already very tired, I kept throwing the thin branches from the bottom of the spruce trees on the fire. When suddenly small buses appeared with tourists who came to take a picture of the Arctic Circle point. They saw some light in the forest and came to look amazed. Some stared and others began to question me as I tried to keep to keep the fire going with the last of my energy remaining. It was a little ackward to be honest. Once in my sleeping bag and left with the tourists gone everything was ok. My tent and sleeping bag are of good quality and kept me warm through the freezing nights time after time.

The next day turned out to be windy. Early in the afternoon I climbed the Finger Mountain and the wind just kept getting stronger. I was very vulnerable because higher in the mountains it is tundra and there are no trees to stop the wind. The gusts of wind exploded and the feeling temperature crashed down. At this point when I decided to turn back a jeep pulled up next to me and offered help. I didn’t hesitate for a second and we threw my bike in the trunk and I got a ride to Yukon River Camp. 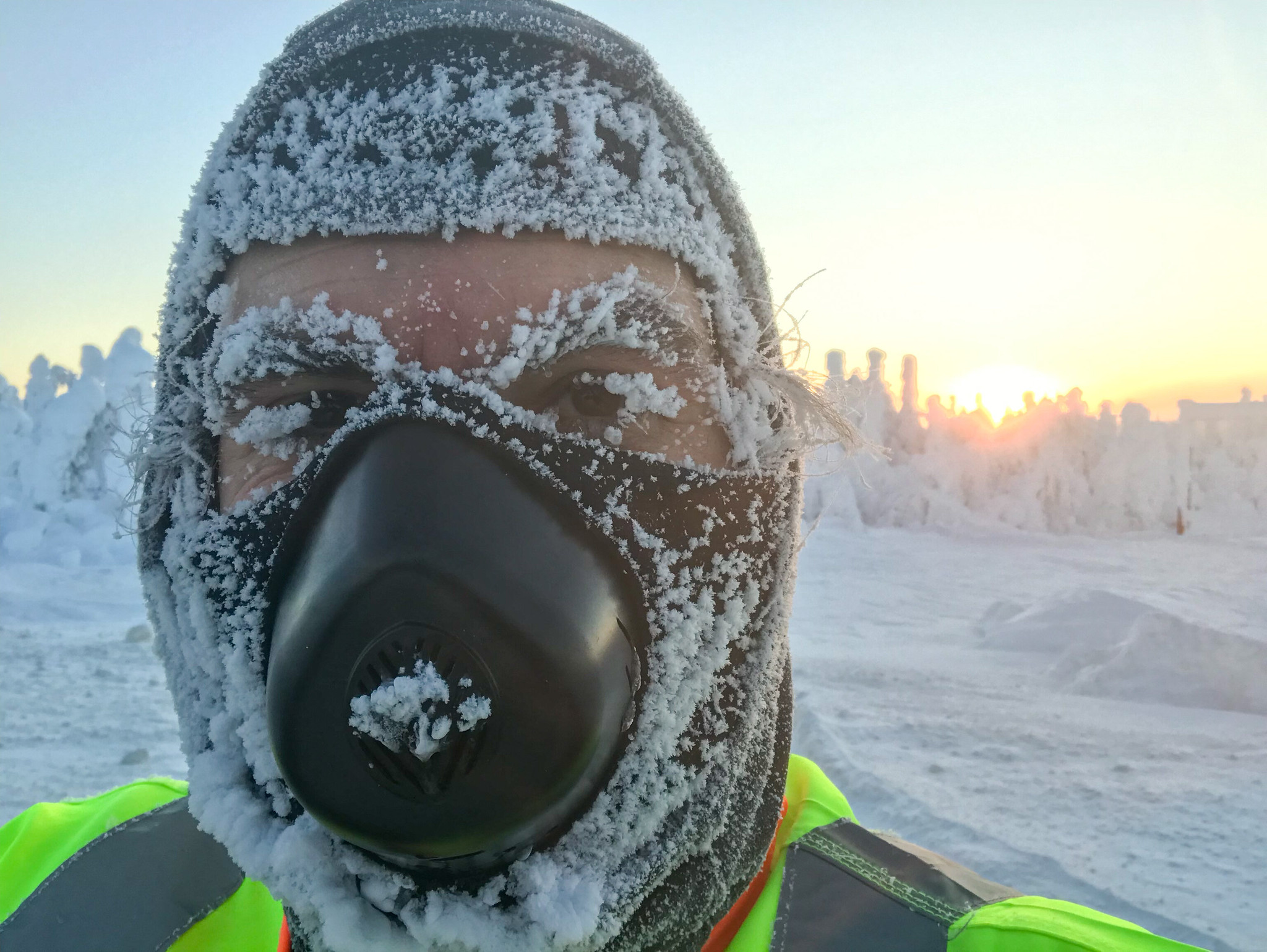 It all happened quickly and I was very relieved to be in a warm place. I don’t know if the wind was a tail end of storm Elliot which has come into the news, what I did know is that I wasn’t going to cycle again this day. I threw out all my stuff and enjoyed conversations from people who listened to my story with great interest. People gave me hand warmers, a very nice person bought me breakfast, and a lady who worked at the Yukon River Camp gave me some ready-made meals for the road.

Fortunately warm and with fresh energy, and after a nice breakfast, I started a new day of cycling. Temperatures had dropped below -40°C close to the Yukon river. 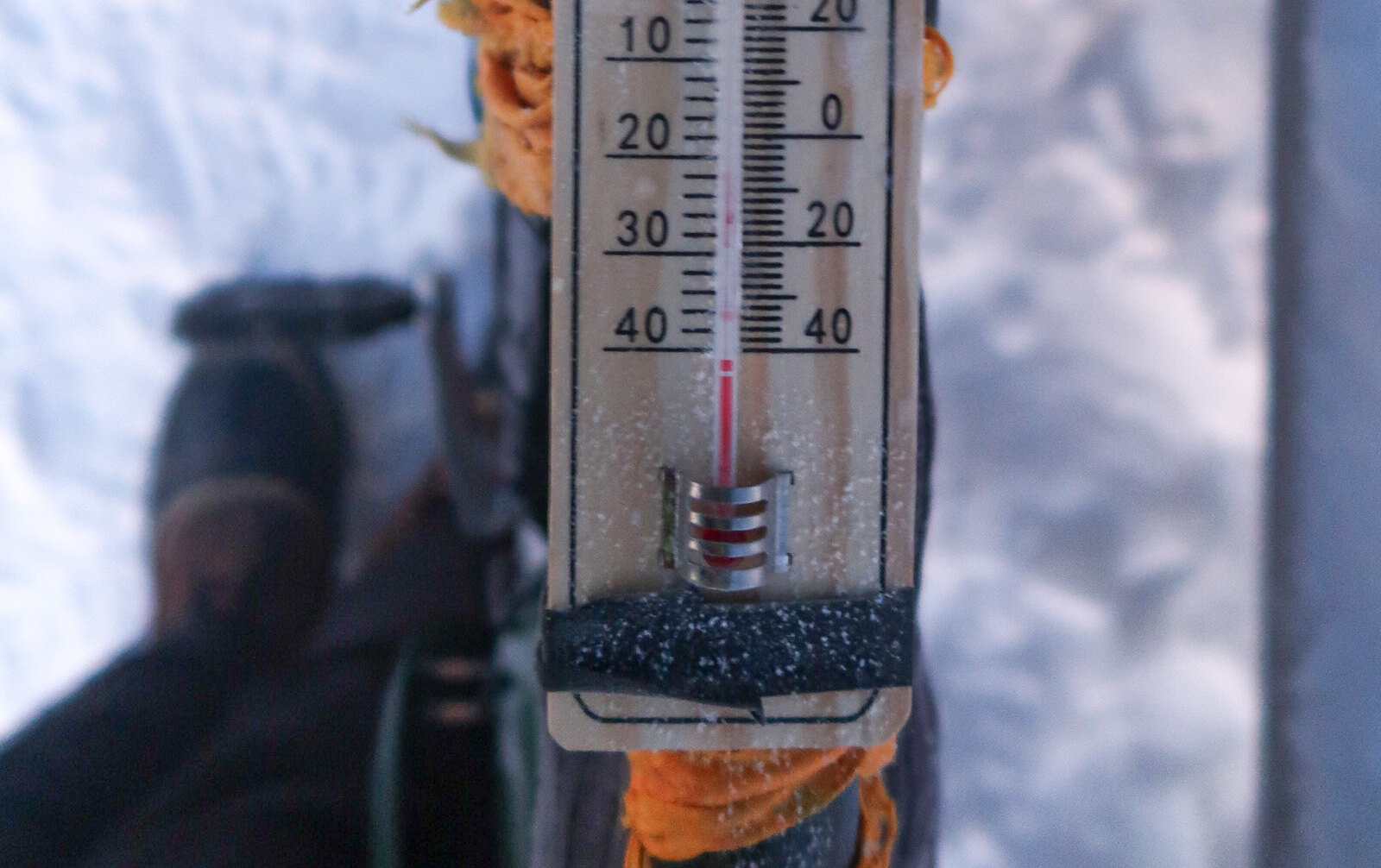 The climbing started again and the battle with sweat and cold was immediately on again. Not much later in the day I also suffered from a flat tire. I had to surrender to the constant discomfort of everything taking an extreme amount of effort. Also, one of my attachment points of a front bag had broken off. Plastic and rubber don’t work too well in these temperatures and I soon noticed that. Fortunately, I became more and more accustomed to the temperatures and I also let go more and more to want to cycle a certain number of kilometers during the day. The cold and wind determined everything for me.

I pitched my tent early that day and thankfully got my tire replaced. Touching metal with my bare skin was immediately punished. The thin gloves I had were worn out after only two days and other gloves turned out to be just a bit too small. All in all, everything remained a hassle, but I also started to become more and more handy at mastering this hassle. 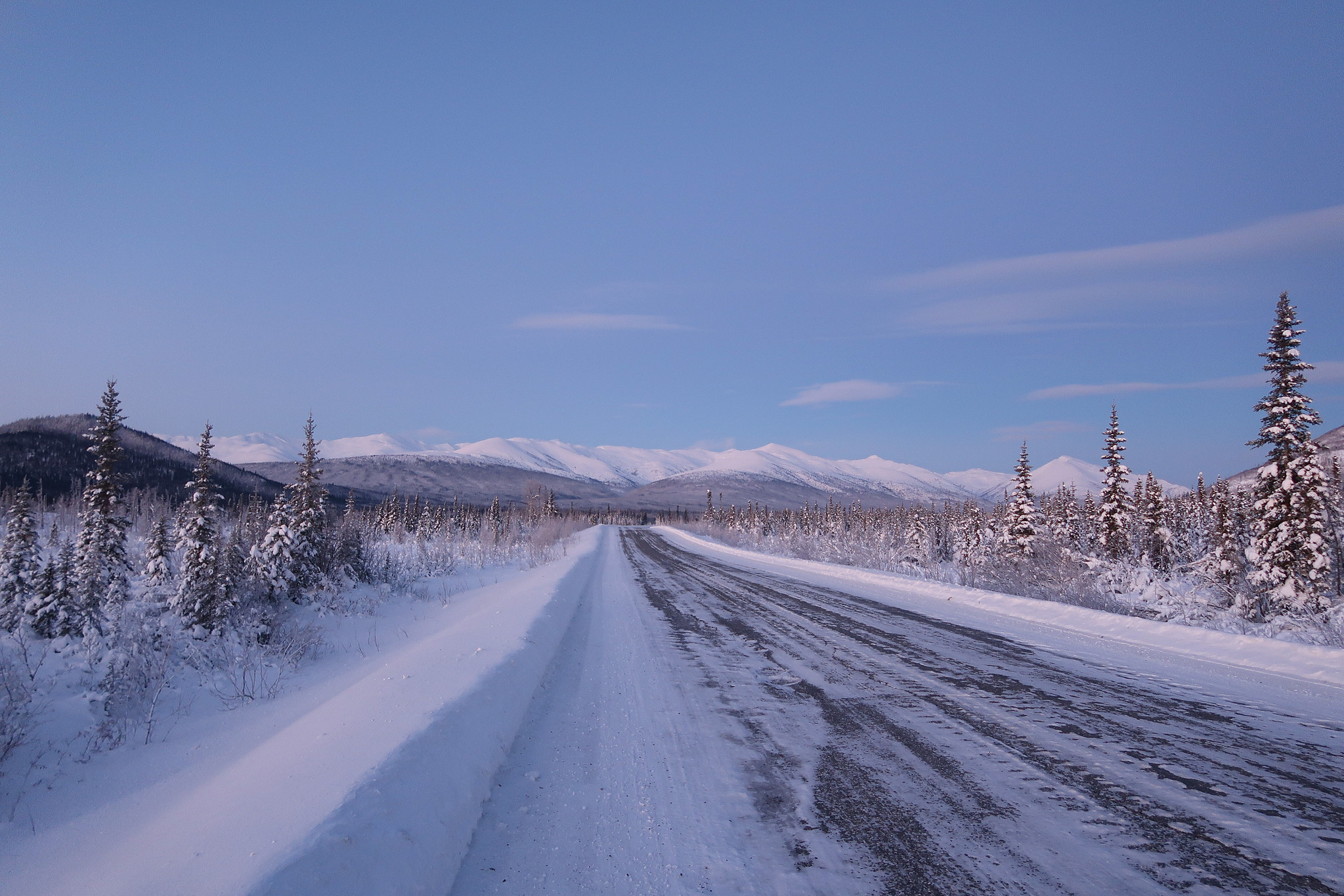 After two days of cycling, I was getting closer to the transition from the Dalton Highway to the Elliot Highway and getting closer to the idea that I might be able to do a call home for Christmas. I had reached a point where all I wanted was that. Another day of cycling away from Sharon, who had already let me know that he was welcome again, I began to long for some company.

It was later that day that my other band also gave up. I had a spare tire but there was no way to inflate the tire. Whether it was the pumps that didn’t work or it was the inner tube that didn’t take the cold, I don’t know. When a sweet American-Chinese couple stopped by and handed me hand warmers and chocolate candies with a sweet voice saying, Merry Christmas to you! I felt grateful but at the same time I noticed that cycling further would no longer work. I gave them Sharon’s number and they would call her when they got through. I also forwarded my location with my SPOT Satelite Messenger to make sure Sharon would spot my location. 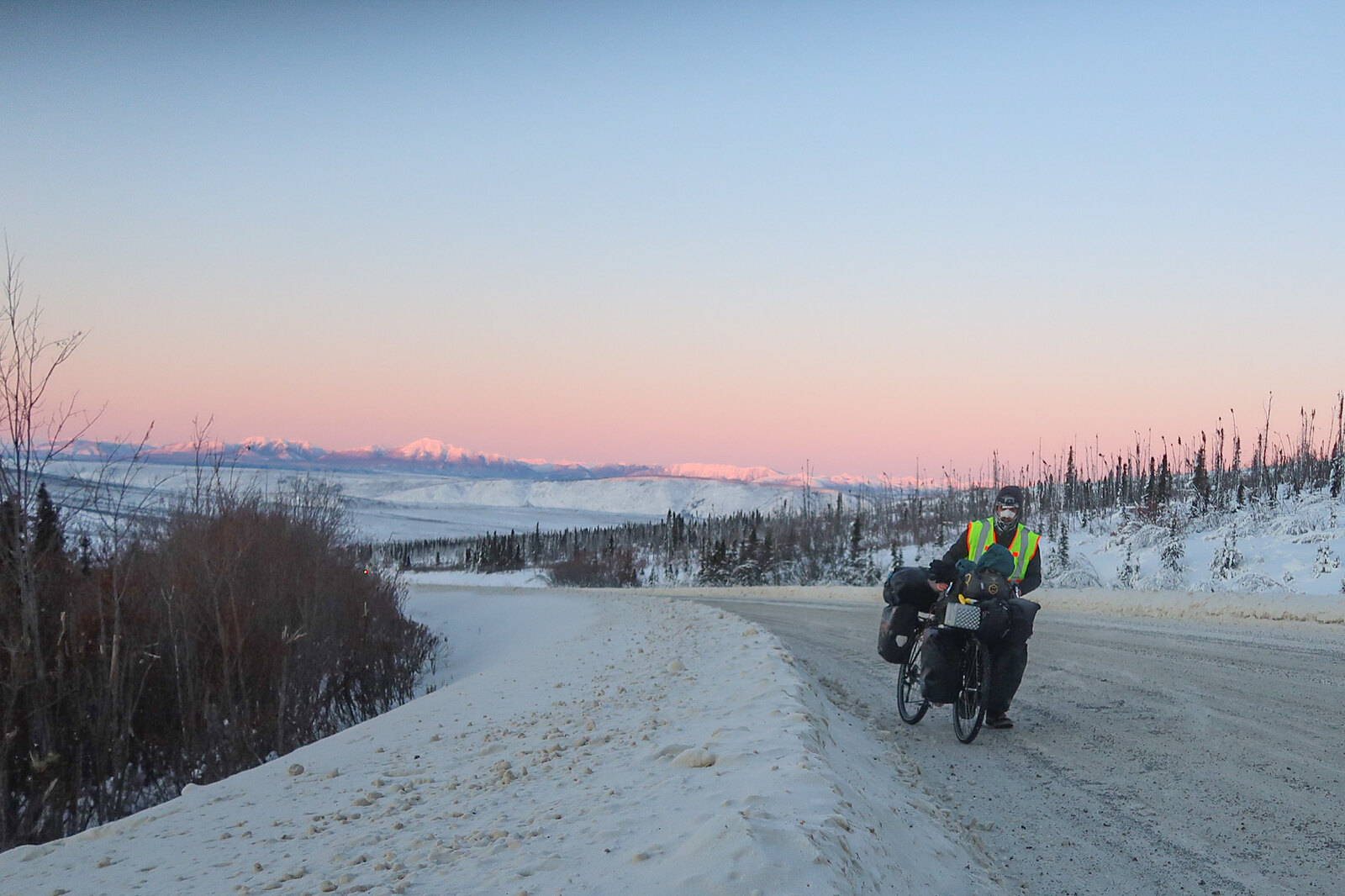 Hours later I decided to put up my tent because it was getting dark. Suddenly I looked around and saw Sharon getting out of her car, I couldn’t believe it at first and stared at Sharon and the car. At this point, this was the greatest Christmas gift I could wish for. A warm place, good company and a call home for Christmas. I couldn’t wish for more at that moment and I am very happy and grateful for Sharon and the effort she took to help me. I became aware once again that I could never do this all alone.

We celebrated Christmas the next day with her mother, who had come over from Nevada, and watched the movie The Gentlemen on Netflix. That felt extra good after this challenging start of my journey now going down south from Fairbanks.

Thanks to my wonderful host, Sharon, I can now make some repairs and make sure I continue my journey from Fairbanks to the Canadian border with sufficient nutrition. The temperatures seem to be a bit milder in the coming days. Thanks also to Garret, Michel and Yukon River Camp for the help when I needed it.

Thank you for reading and all the encouraging messages, they do me very well.