Curiosity brought you here: Home › Adventures › Cycling North America (2023) › Alaska › The aurora, Canada and a host, or not?

Early in the morning I was awakened by Vlasios, who was watching videos with geopolitical discussions on an old laptop. I lay on a bare mattress in my sleeping bag liner and a pair of rolled-up down pants for a pillow. It was very hot last night, perhaps the Greek-American Vlasios thought, let me warm up that poor boy. The motels were too pricey for my budget here in Delta Junction, and now I was lying on a mattress in a corner of the Pizza Bella restaurant. When I arrived yesterday, Vlasios made the thickest pizza I’ve ever had and when he heard I wanted to sleep outside, he said, “You seem like a nice guy, you’ll just sleep here in my restaurant tonight!” Funny but was of course a very reassuring gesture for me.

Somehow that evening I also ended up with $50 in change that was mysteriously placed in a kind of plastic savings jar near my front wheel. Was it from Vlasios? Or was it someone who had seen me on the road and now saw my bike parked out here? It was as if Jimmy’s generous spirit haunted me. Who the generous giver is, I would never find out.

January 3, 2023 was a day I would never forget. It was a wonderfully clear day and that also made the white snow-covered trees and forests visible from a distance, especially on the winding roads higher on the hills I saw how beautiful the winter is here. With a dreamy presence, not always looking sharply around from my bike, I was suddenly surprised by a, what was it actually? A fox, a wolf? It turned out to be a coyote that was sitting on the side of the road a bit absent-minded. It was the first time this happened to me and immediately brought me a feeling of euphoria. 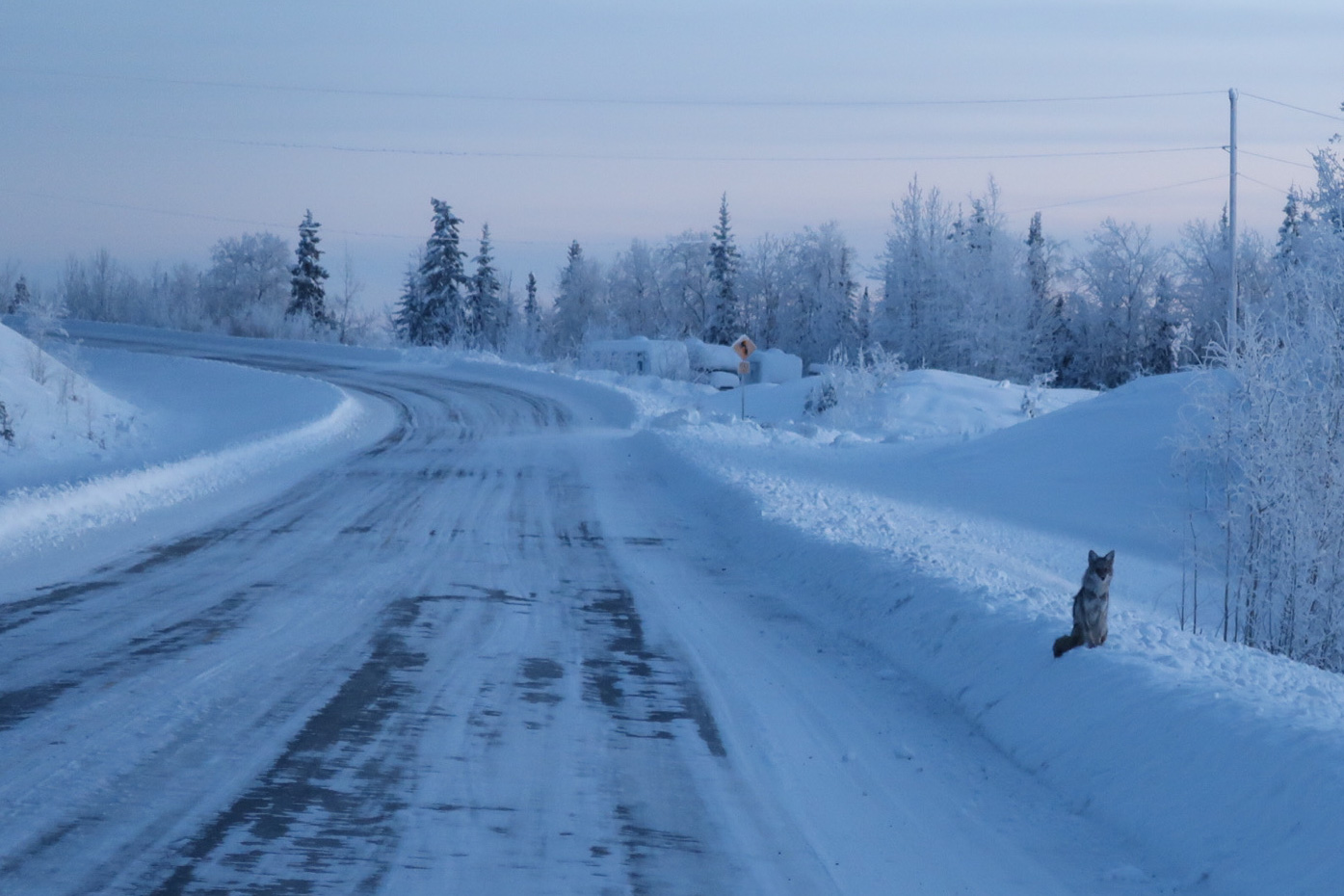 At the end of the afternoon it started to get dark. The moon rose visibly just above the vast forests to my left. It was a wonderful evening that I didn’t want to miss for the world. So I decided to keep cycling. The temperature did drop below -20°C, but that didn’t spoil the nice feeling of having such a clarity in the night. I secretly hoped it would happen one day but I didn’t want to attach myself to it because I simply have no control over it. It felt like a blessing when what I had hoped for so much happened to me and this had never happened before in my cycling life. As the evening progressed, green glares began to appear diagonally behind me. The aurora! I stopped to observe the movements and to took some pictures. It was an incredibly beautiful moment and I felt overflowing with gratitude that what I had been looking forward to became reality. 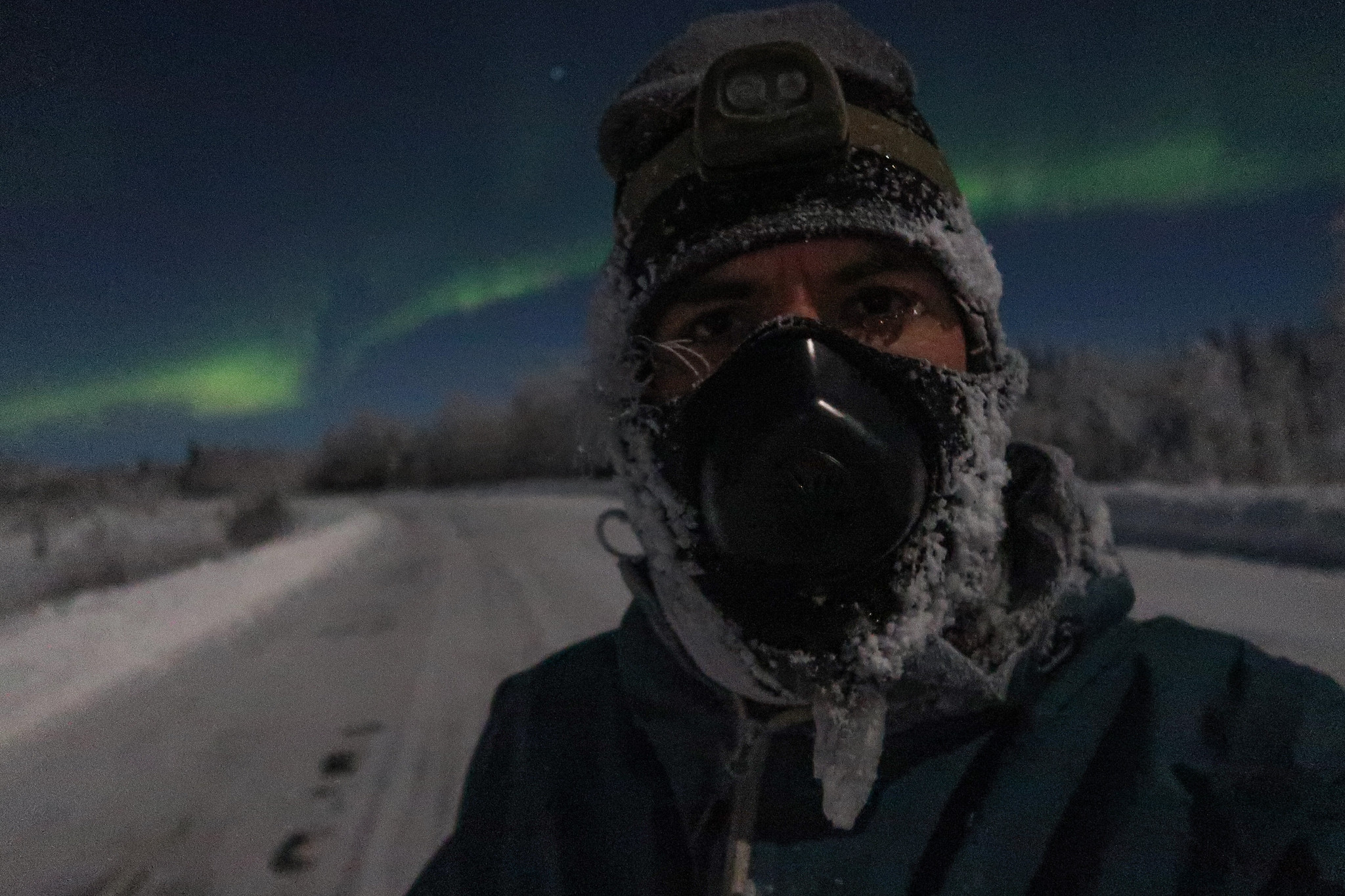 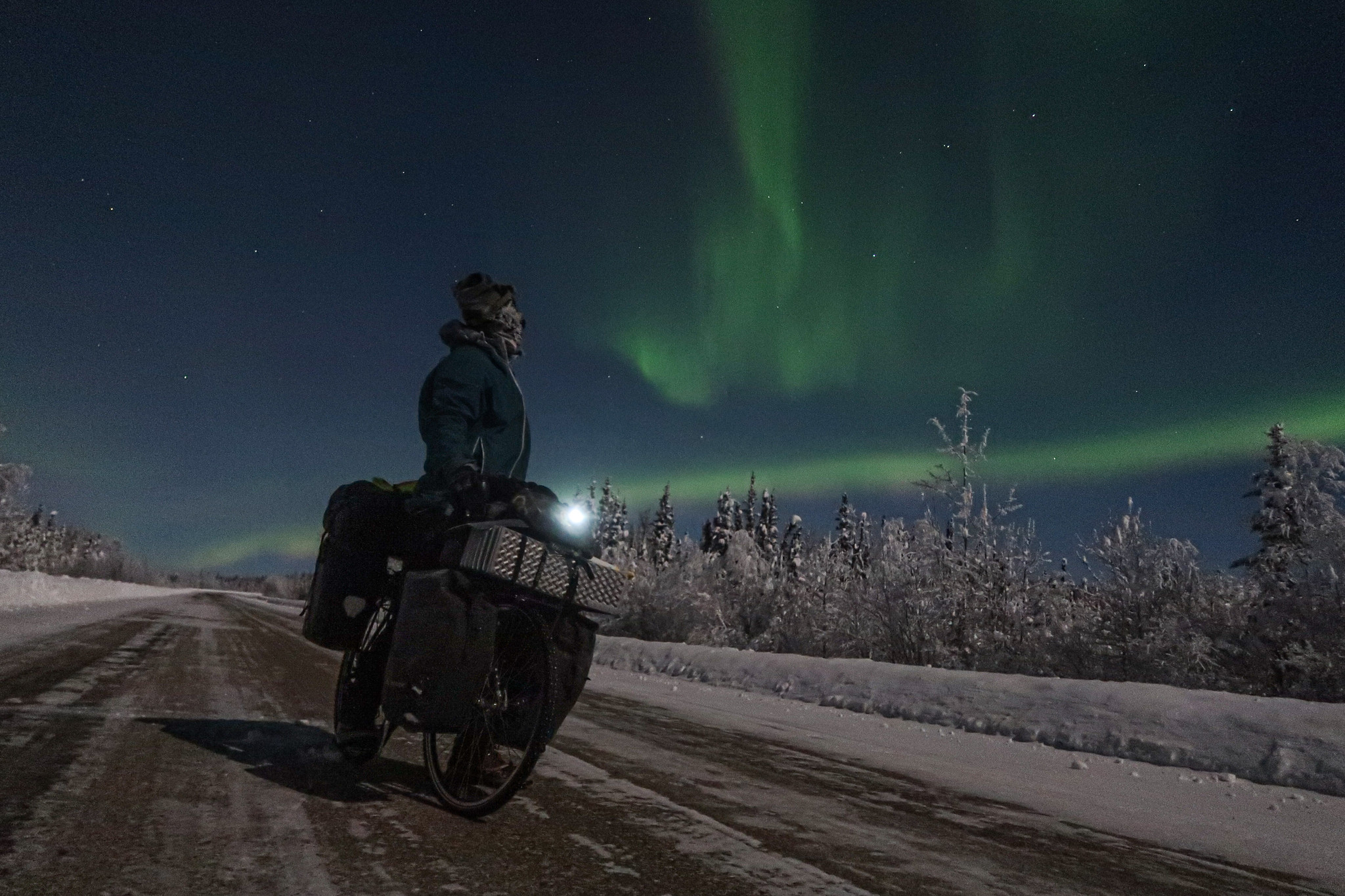 This clear evening I was allowed to cycle for hours under the watchful eye of the long green dragon who, while moving, made this cold evening an evening I will never forget.

I was tired later in the evening and found my place to sleep at one of the recreation points used by hunters to go into the woods on snowmobiles. When I’m tired I often feel a bit anxious. I am more alert and more frightened, because yes, I am alone in a dark forest with hundreds of kilometers of remote nature around me. I turned around when setting up my tent and was shocked by a self-created shadow that looked like something moving for a moment. This evening I also ran into my bags that were on the floor and I was shocked again because in a flash I thought I had run into a bear. I shouldn’t have listened to that What Was That Like podcast about someone surviving a fight with a bear.

The following days I cycled past Tok and the regularly recommended and locally famous Fast Eddy’s restaurant, where I spent a night in a motel to dry my things. I also had problems with my pumps of my MSR burner, which is one of my most important camping items for me. I had to dry them well and give them maintenance. 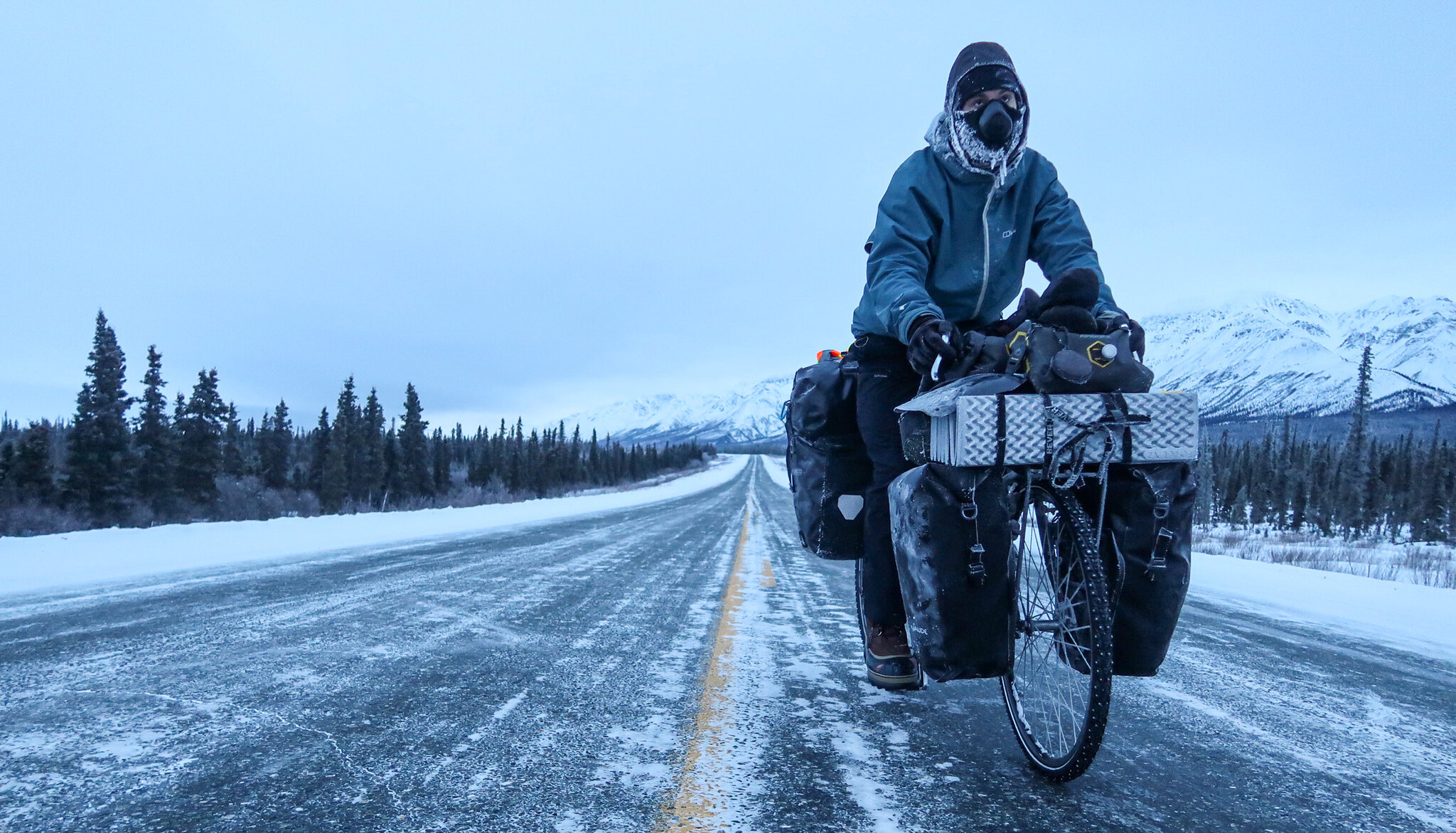 After Tok, not far from the border with Canada, I stood enjoying the view with a cup of tea and also nibbling on a piece of frozen sugar bread. Suddenly a big black jeep stopped next to me, ‘you’re sick!’ A guy my age shouted from the co-driver’s seat.
I turned around, ‘Am I sick?’ I said back as the guy shook his head, ‘no, no, I mean you’re crazy! Crazy that you are cycling here in the winter!’
I smiled and said enthusiastically, ‘I may be crazy but look around you, this is so beautiful!’
‘I’m Kat,’ the lady behind the wheel called out, offering me some mint chocolates, ‘we’re from Whitehorse, you’re welcome to stop by, for a shower, food, sleep, anything you need!’
They wrote their address on a receipt from the Lowe’s in Fairbanks and I stuffed it deep in my frame bag because, who knows.

By now I was more used to the routine of cycling in these cold conditions. Mornings are the hardest, when I’m so cozy in my warm cocoon, it’s hard to find the motivation to be confronted with the cold. Still, I unzip my sleeping bag after giving myself a small motivational talk. I put on my down jacket and start melting snow with my burner. Then I make a breakfast of mainly oatmeal, raisins and prunes. If it’s in my ration, I heat up a soup and then put it in a thermos food jar and eat it for lunch on the go. I keep a small snack bag on my handlebars that I fill with energy bars, chocolate and dried fruit to eat on the go while cycling, so I do my best to replenish the 5,000 calories I burn every day.

At the end of the day I look for a place to set up my tent and clear an area of ​​snow. Fortunately, not much snow has fallen this winter and that makes creating camp very doable. Once my camp is settled, I start melting snow and use the boiled water for dinner, sometimes a freeze-dried packet, and other times chili beans, corn, and tortillas. 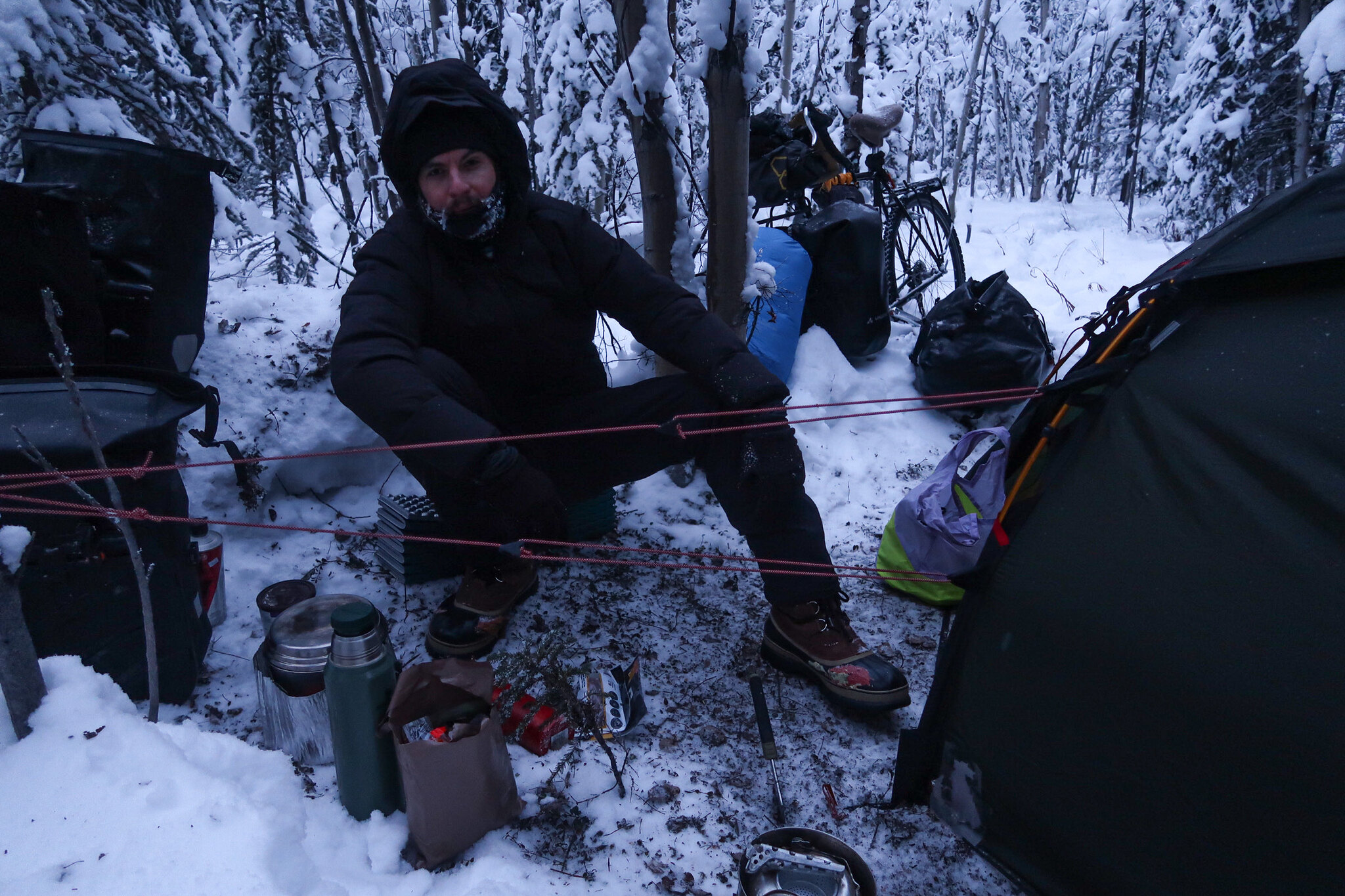 Then before bed I make a tea or hot chocolate and eat some nuts and dried fruit before crawling back into my sleeping bag. When I’m satisfied with the day’s effort and there’s something delicious in my bags, I treat myself with an extra snack for dessert, for example a frozen cupcake.

The border crossing into Canada was smooth and I was made aware that upon re-entering the United States I would have a full six months at my disposal before having to leave the country again. I rather thought that my B2 double entry visa would keep going during the time I would be in Canada. This knowledge took away a lot of stress from having to cycle back into the United States as soon as possible. A lady from the Canadian customs warned me about a bear that would be active and aggressive near Whitehorse. It sometimes happens that a bear has not been able to find enough food to go into hibernation and then they can be walking around desperate for food early in the winter. In Coldfoot where I had started my journey, a bear had even broken into one of the sleeping cabins in search of food. Bears that are so desperately snooping around and being a danger to people are often quickly shot, which I understand but still find a bit sad.

The last stretch to Whitehorse went through the beautiful Kluane National Park. The glaciers were very nicely visible to my right and that often resulted in very nice views. At Haines Junction I was pretty much through my food supply because not much is open along the way. It often takes between 100 and 200 kilometers before there is a place, often a gas station with a very pricey mini supermarket with mainly cans of beans, Hersey bars and some dried meat. 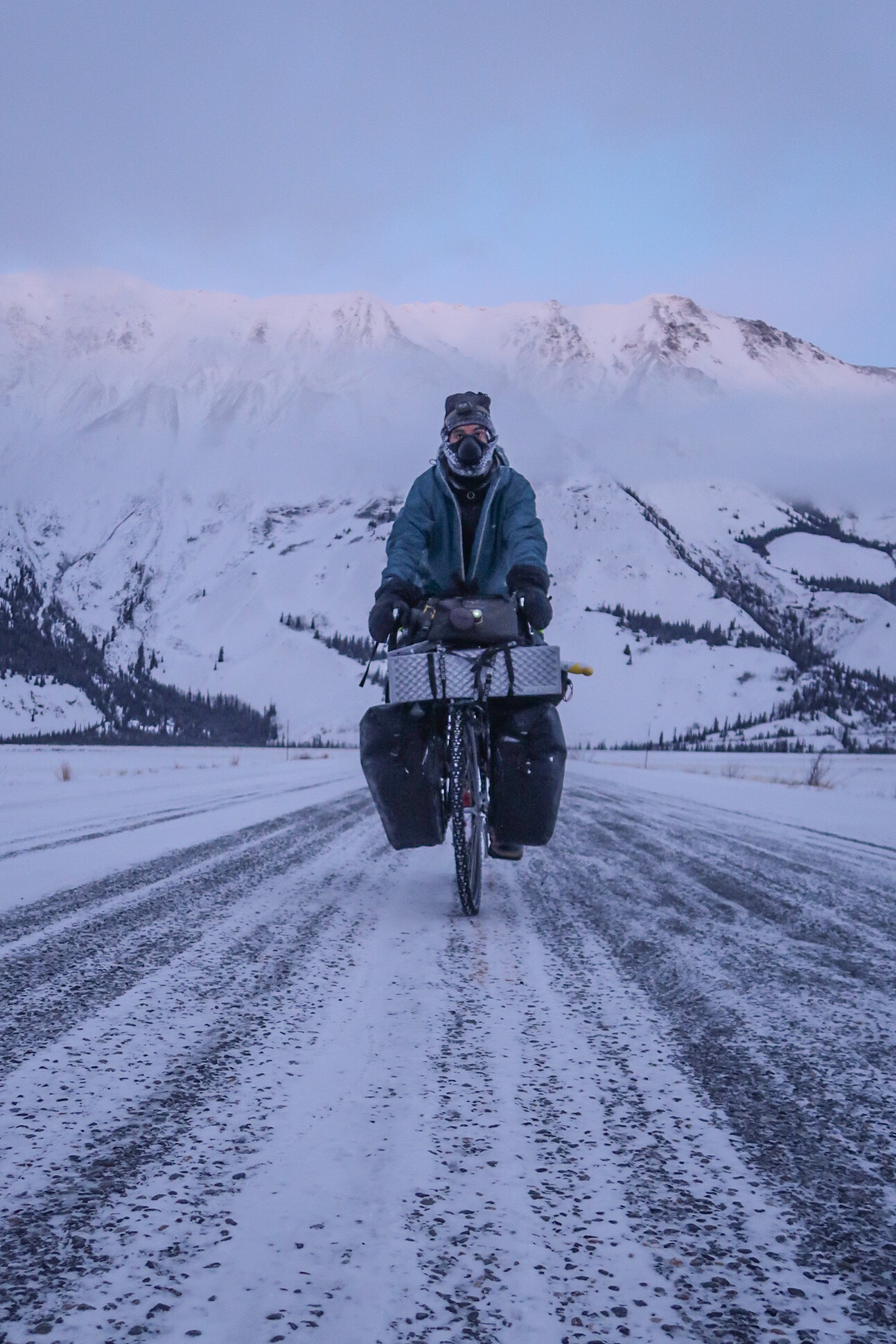 It had to be in the Riverdale neighborhood, I had finally arrived in Whitehorse. Tired and with little food left. Just around the corner from the Teslin Road and it should be there. A cute green house gave the number on the note, full of excitement I putted my bike down and walked to the front door of the house. I knocked and a lady opened the door and looked at me a bit surprised. That had to be Kat, or was that Kat?
“Do you recognize me?” I asked, hoping for a agreeing answer.
The lady in the door shook her head, ‘should I recognize you?’, she replied with a questioning look.
Damn, I thought, now what?

I want to thank everyone who supported me with a kind message or a donation. I travel and write self-sufficient with a savings budget and this blog is and will remain completely free of advertising and sponsorship. Stress that I have from time to time with the prices of food and repairs ebbs away when I notice that there is support from readers.

That’s amazing, this let me feel connected and supported, thank you so much for that!