Curiosity brought you here: Home › Adventure Advice › Advice from a long distance cyclist who has been traveling the world for seven years

In this article you’ll find advice from a long distance cyclist who has been traveling the world for seven years.

Nigel is 62 and has been cycling around the world for seven years now. It all started in 2011 when he changed his life in Australia for a life on a bicycle. Seven years later he is riding through Rotterdam. It is Daniel who has hosted him for the past week in Zwartebroek and they came together on a ride to Rotterdam. From here Nigel will continue his journey to England and further to Vietnam in South East Asia.

Daniel met Nigel in Iran when he cycled to China with his friend Eric in 2016. Daniel I met before he started his journey, just when I was back from my ride to Singapore. 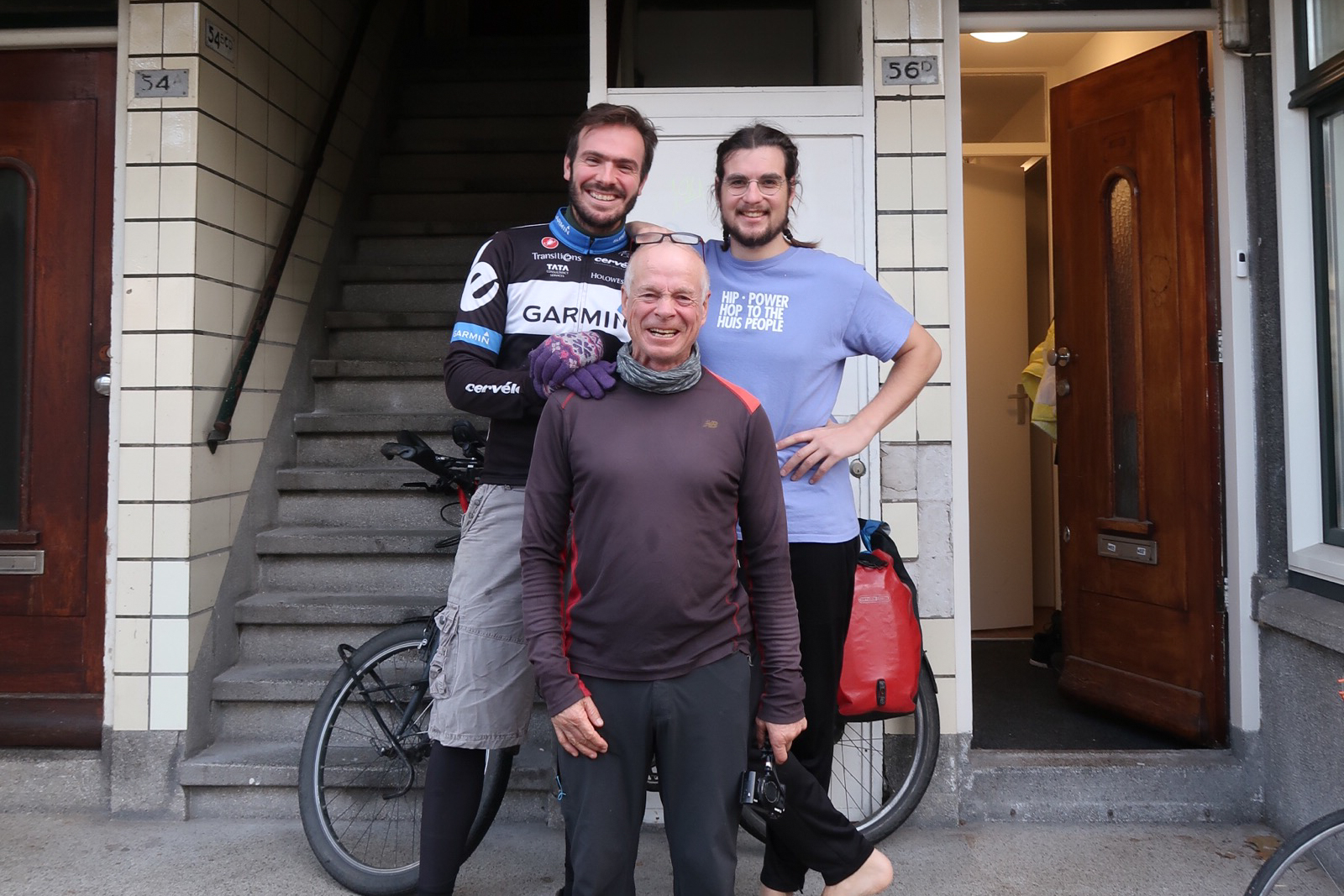 I’ve been following Nigel for a while. He is one amazing cyclist in terms of living day by day and making the most of all experiences. In 2011 he started his journey along the Mississippi in the United States. He liked it so much that he has never stopped cycling ever since. Nigel then cycled in South America, Africa, Central Asia, Iran, Turkey, now in Europe and soon in South East Asia.

During the two days that Nigel stayed at our home, we had many talks about adventure, cultures, mountains, tents and bicycles. He shared some of his secrets with me that he had discovered during all his years of adventure. His advice is really useful and I didn’t want to keep it to myself.

So here we go, some random advice of an experienced long distance cyclist.

A new look
Nigel has covered the frame of his bike with duck tape. He explains: “The more expensive the few belongings you have look, the higher the chance that they will be stolen.” So don’t let your bicycle have the look of a very expensive one. 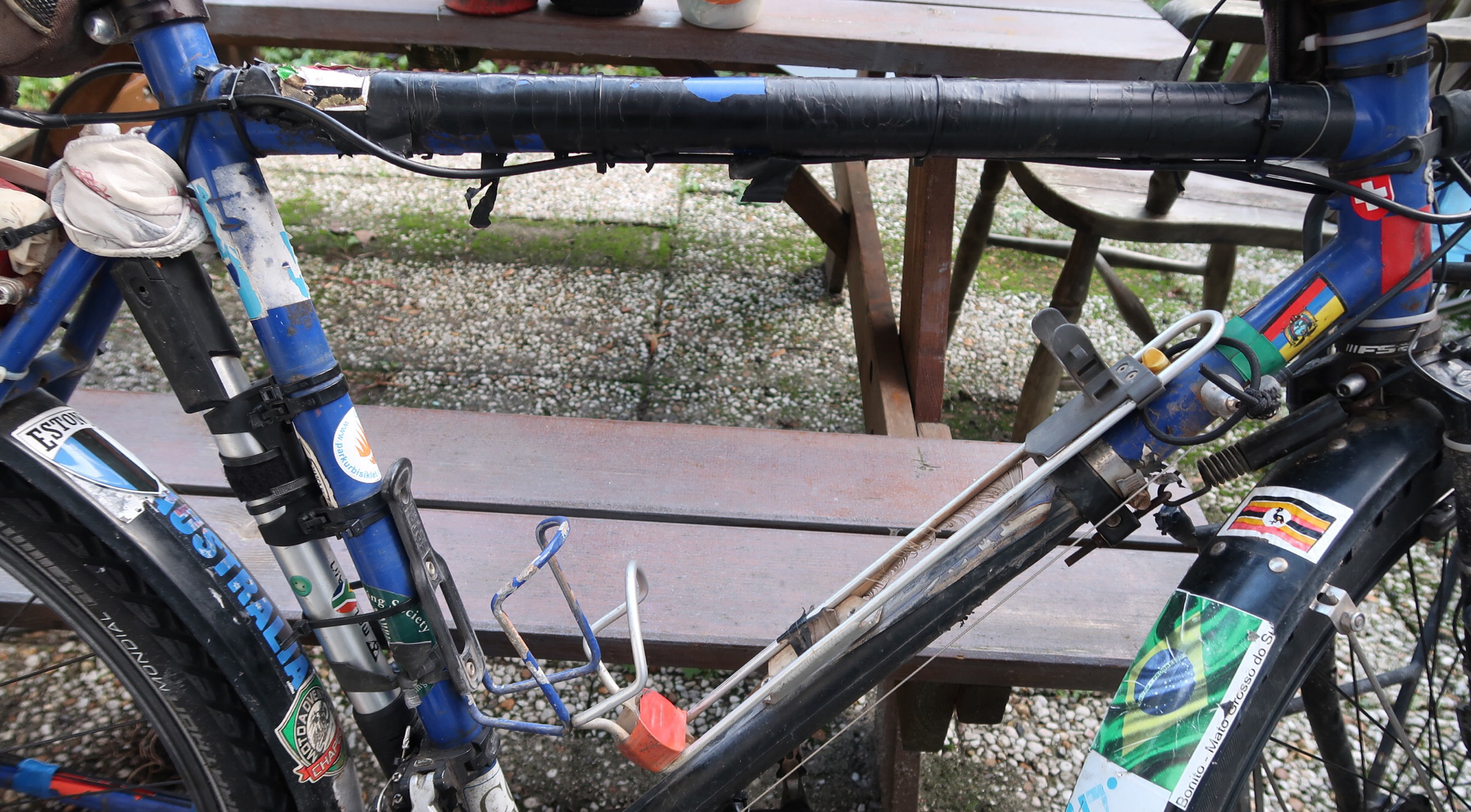 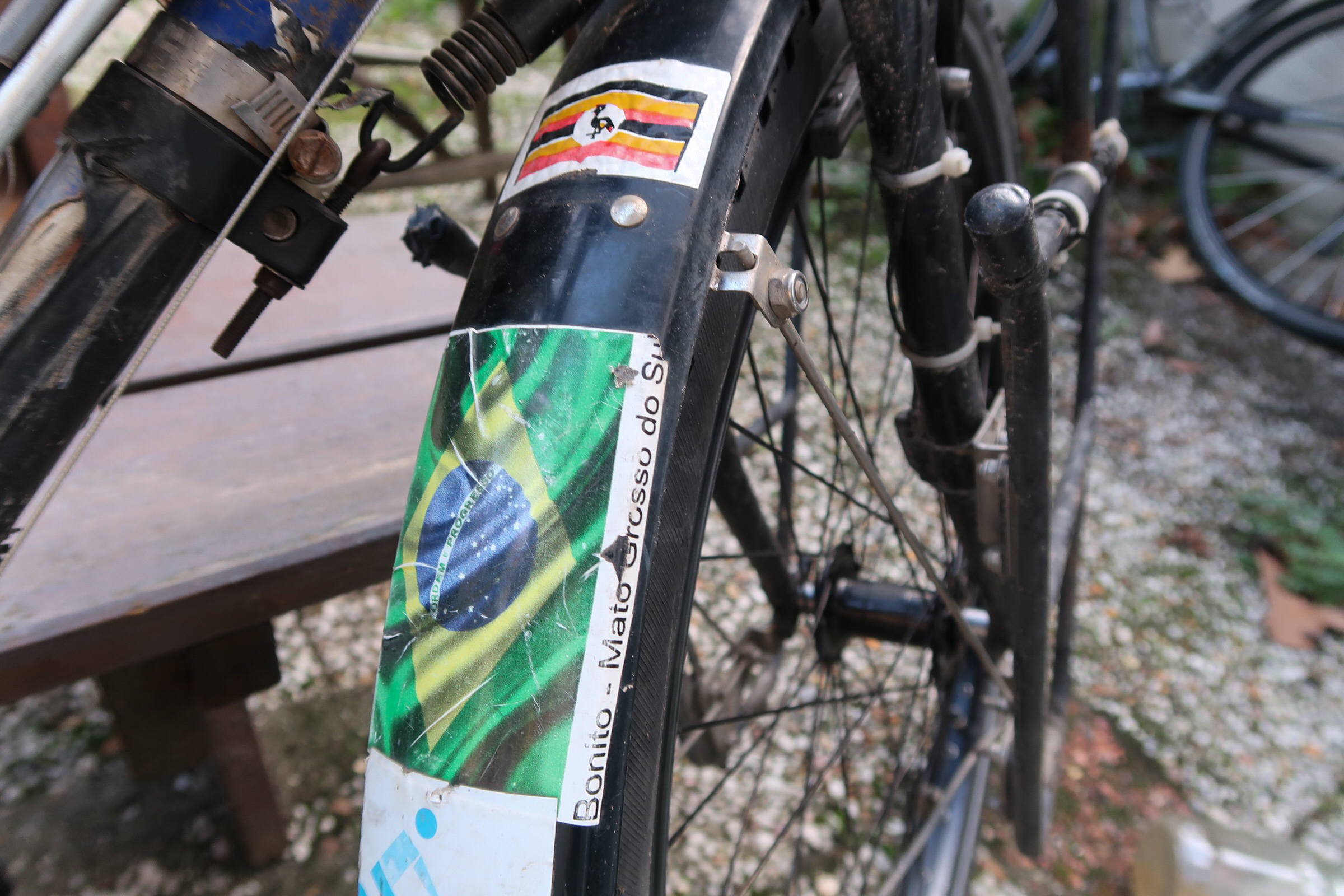 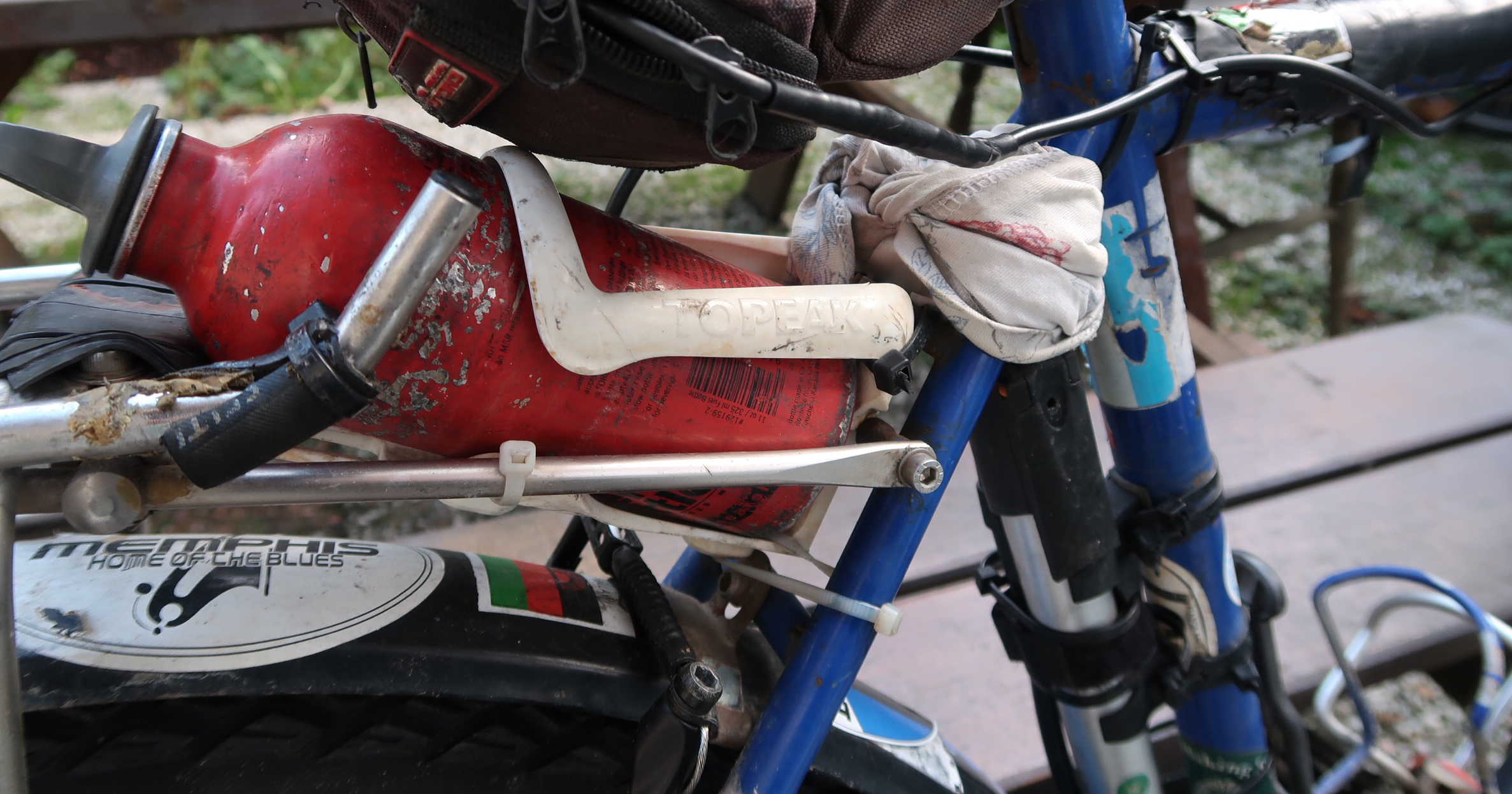 Sikaflex kit
Cracks in your bike bag? At a certain moment, an Orlieb bag is also in need of renewal. But without any fancy sponsorships those things are really expensive. Nigel solved his with Sikaflex kit. His bicycle bag is therefore completely waterproof again without spending the money for a new one.

Empty (plastic) bottle
“Are you getting out of your sleeping bag when you have to pee?” Asks Nigel with a smile. “I use a bottle when it’s cold or raining outside my tent. So I don’t have to go out and get cold”. Maybe an uncomfortable thought, but I also used it in the Arctic Circle. The heat stays in your sleeping bag and you just pee in the bottle.

Wireless keyboard
I don’t bring a laptop with me. So does Nigel. But Nigel has an ideal solution for that. Connecting his wireless keyboard with bluetooth to his phone. Write more comfortably instead of on the little annoying digital keyboard. 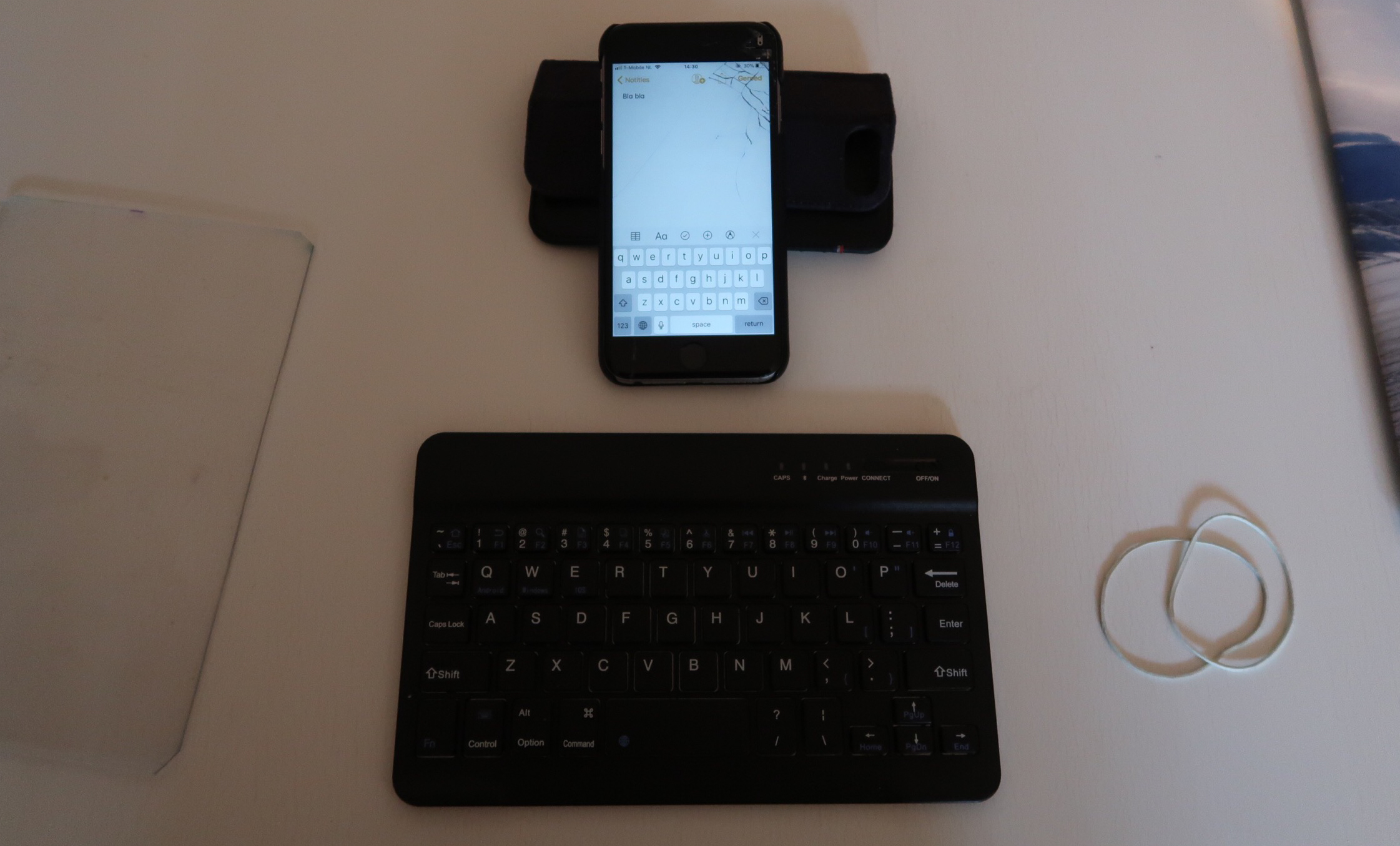 Electric kettle
A small and super handy device. In most (cheaper) hotels you don’t have this service and you can still make coffee. Nigel bought this device in Africa but you can find it in Europe as well. 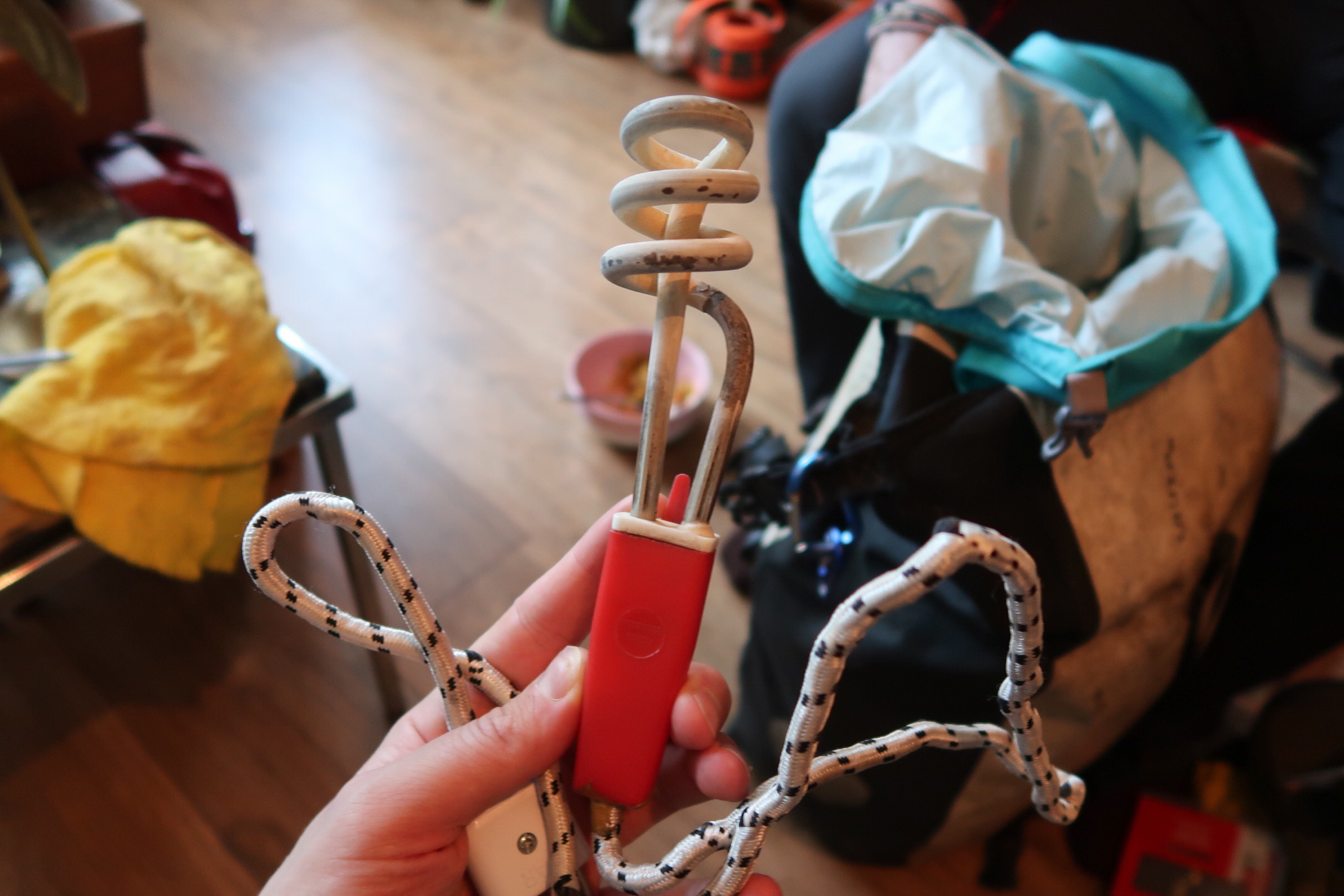 Coffee bag
I know about every kind of coffee making. At least, that’s what I was thinking until now. Until Nigel told me about his way of making coffee. He came across this bag in South America. With the above kettle, he can make a cup of coffee with crushed beans anywhere without having to take his entire burner out. 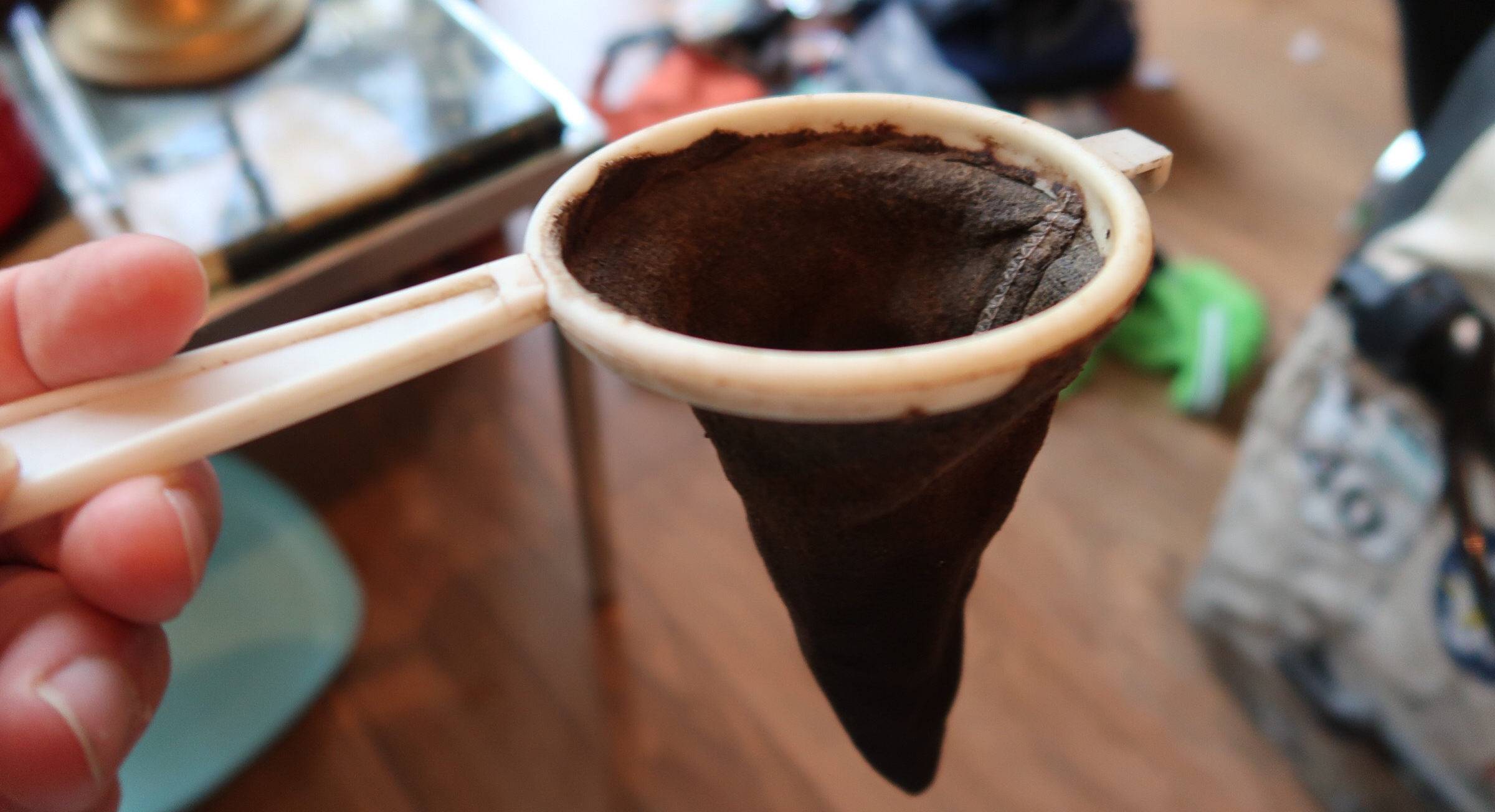 Air bag pump
It can take a long time before you inflate an airmat. Condensation from your breath can cause your air mat to get wet on the inside. Nigel uses a pump bag for this. He explains that you have pumped your air mat in 4-5 times and that takes just a couple of minutes.

Rubber bands and tyraps
A rubber band or tyraps around an empty water bag, a book, or clothing. It keeps everything together and organized.

Steering adornment
Nigel has decorated his handlebars with quite a few things. One is a plastic tray. Fastened with tyraps on his bike stear. 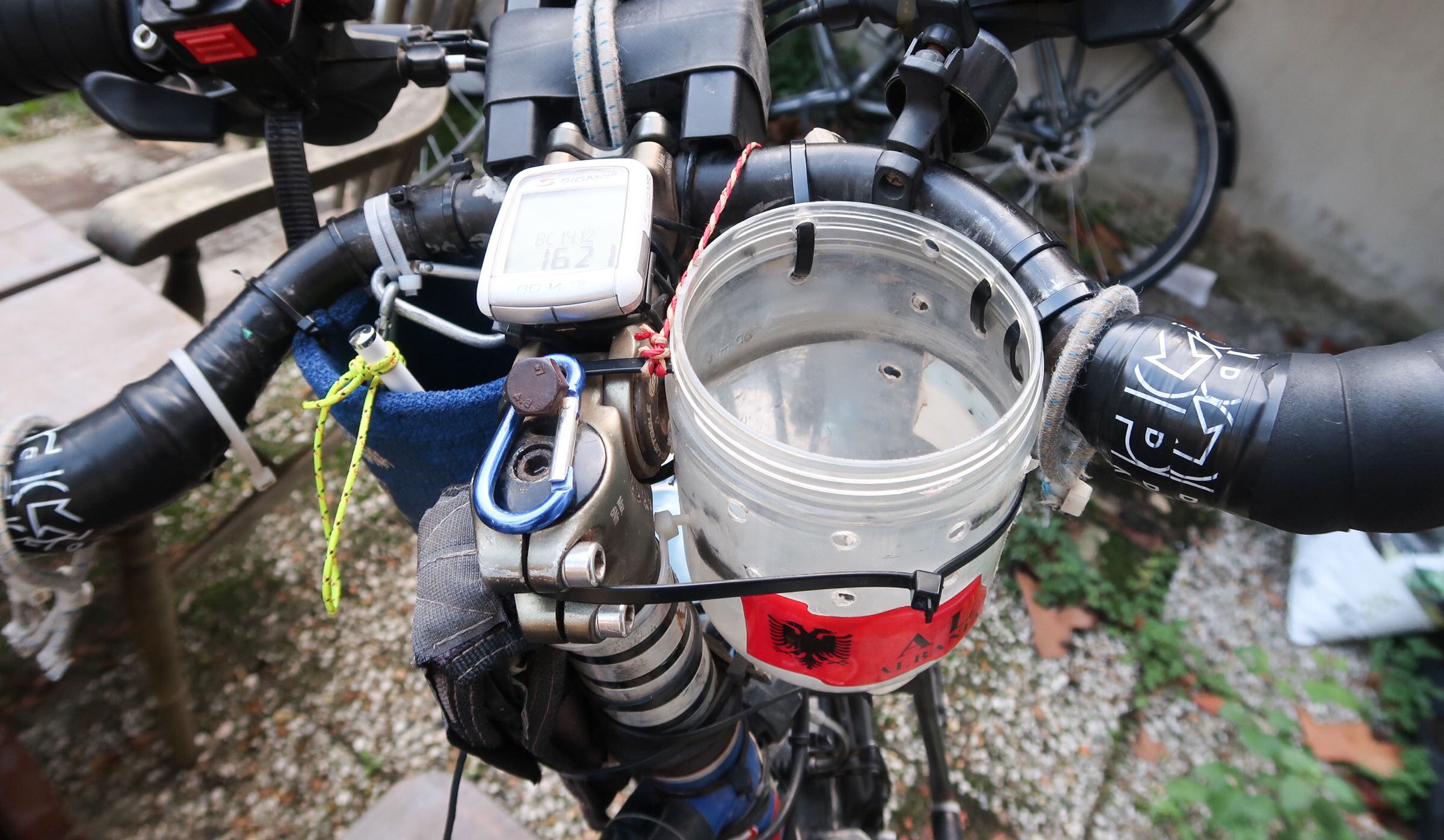 Spinnaker tape
“You mean duck tape,” I ask Nigel. No, he really meant spinnaker tape. “The strongest tape there is,” Nigel claimes. Can be used for cracks in your tent, sleeping mat or even a bicycle bag. Really convenient and very sturdy.

Clean water by UV radiation
The Steripen or also an alternative to a water filter. The device works on batteries and kills all bacteria in water. It makes potable water drinkable again.

Bluetooth speaker
Nigel does not use an earphone because he wants to hear all the ambient sounds of surroundings. Yet music is nice when you are camping or cycling somewhere where it’s remote. He uses a little bluetooth speaker for this.

And so, after many mutual stories about how to survive comfortably on a bike, I said goodbye to Nigel with a lot of new inspiration.