Curiosity brought you here: Home › About Henk › The boy who cycled away

Once upon a time, in a little place on the upper side of the planet, there was a little boy named Henk (he/his). Henk was a bit scared because he lived in a terrifying reality with this weary monster. The monster was a sweet and loving kind but the thing was, sometimes the monster just couldn’t help and got into a fight with Henk.

The eyes of the monster then twinkled and the long fluffy arms reached all the way out to him and made him all scared and confused. Henk didn’t really know how to deal with this and started to build a wall in order to survive the weary monster for all its confusion. 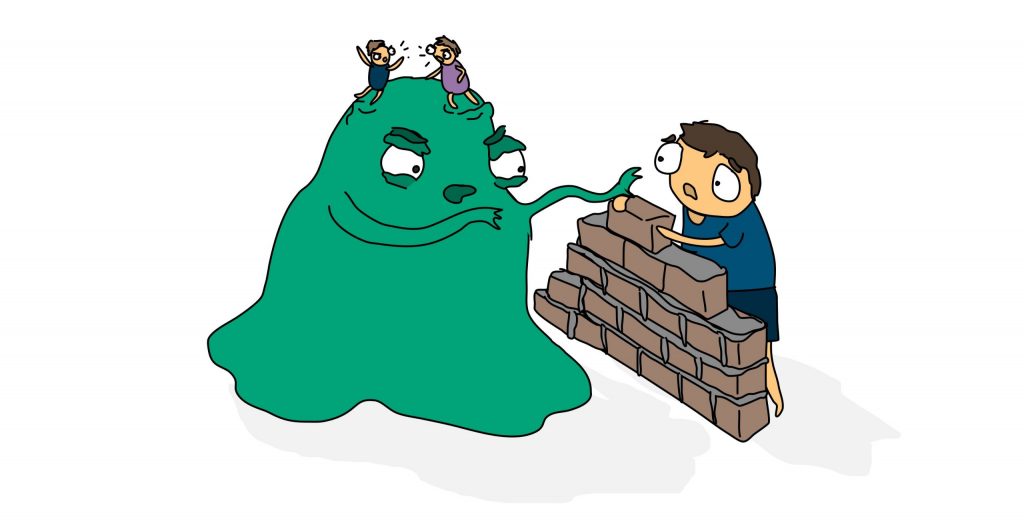 Too afraid to play

Time goes by and it would be nice for Henk to go out and make friends in the outside world at some point. But Henk was still behind that wall building it into a bigger and stronger one.

Children were playing outside. Some would hold hands, some liked flowers and some even played an instrument. They looked sweet and cheerful and really wanted that Henk also was part of that children’s life celebration.

“Come connect with us,” they would say, “we are all sweet and it’s going to be a lot of fun over here, we promise you!”

Henk looked upon them, shaked his head with that worry look on his face as he wanted to be strong but really was too afraid and didn’t know how to act. With that thought, he putted another brick on the wall. 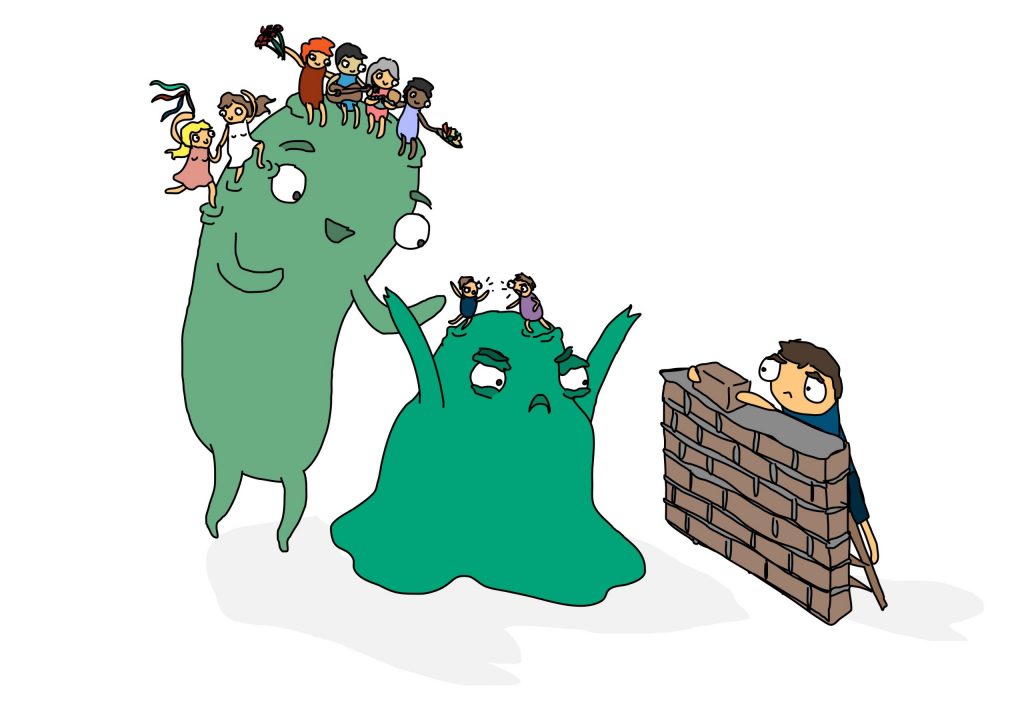 Henk feeled empty inside while looking out to the world from his beautiful builded strong wall.

If you looked deep in his eyes you would almost feel what he would feel. Like he could say with only that look: “I’m totally fine with myself, don’t mind me”. But deeper, much deeper behind that first impression, there was this disappointment of not having the shared happiness of the children playing.

One day this usually bright and cheerful monster wanted to put an end to that deeply feeling of disappointment and started to tell Henk what the monster believed to be very important in living a good life: “Why?”, the monster would shout in a questionable voice, “Why you got yourself all this disconnected and you know, that’s never going to be fulfilling to your bright and beautiful soul. You took all the effort in building a wall and now you’re all sad!” 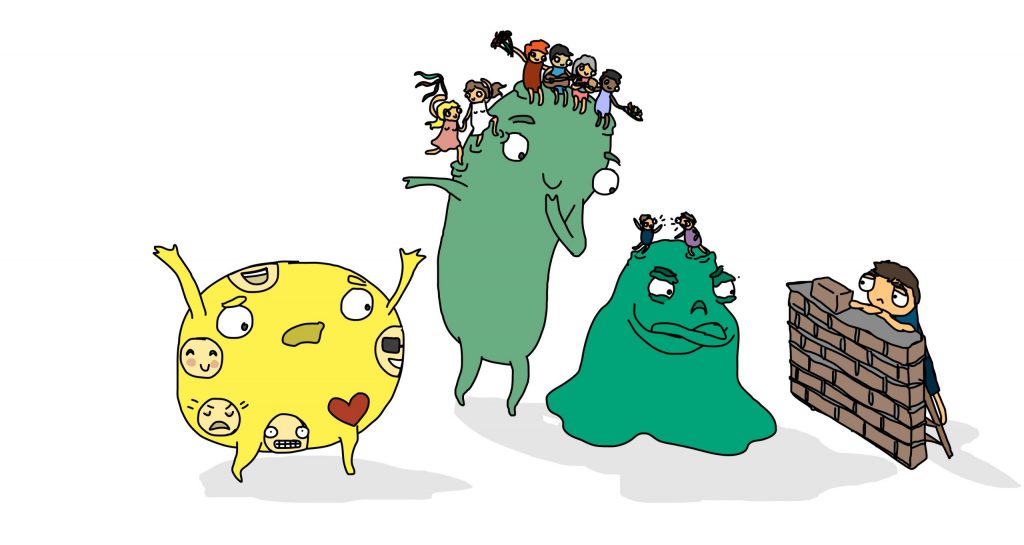 “That is a judging monster,” would Henk think, “he didn’t have to survive all the scary feelings that I had to! I feel safe right now and that’s all that counts for me.”

That’s how Henk would justify his own feelings from behind the wall, while playful monsters made the world looking so big, bright and colorful. Henk learned to solve his problems very well. He wouldn’t be reactive to life, no, in contrary, he managed to keep himself curious about everything. It only looked so far away from him.

Henk would be socially very uncomfortable always feeling afraid for they ever would find out. Find out that he wasn’t enough. Tough enough. Smart enough. Good looking enough. He would have the need to connect with others and trying to make friends but there never could be a real connection. Scared to be hurt and scared to be loved because deep down Henk was scared to be worthless.

It was this deep insecure feeling that really made him sad. 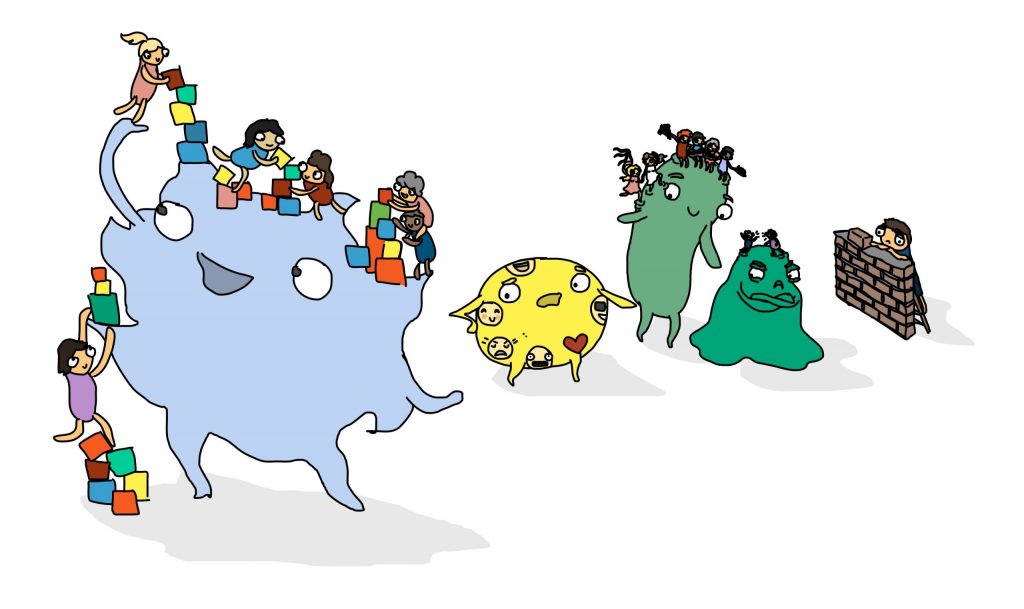 He would face smiling people filling their backpacks like collecting values that would form their identities. It has that picture that life is all about character building through all wonderful connections and great life values lived in a passionate way.

It seemed that everyone was building friendships with each other. Children played outside and they all filled their backpacks with beautiful experiences and colorful memories. Henk would feel a growing distance between him and everything that happened in the society in which he grew up. 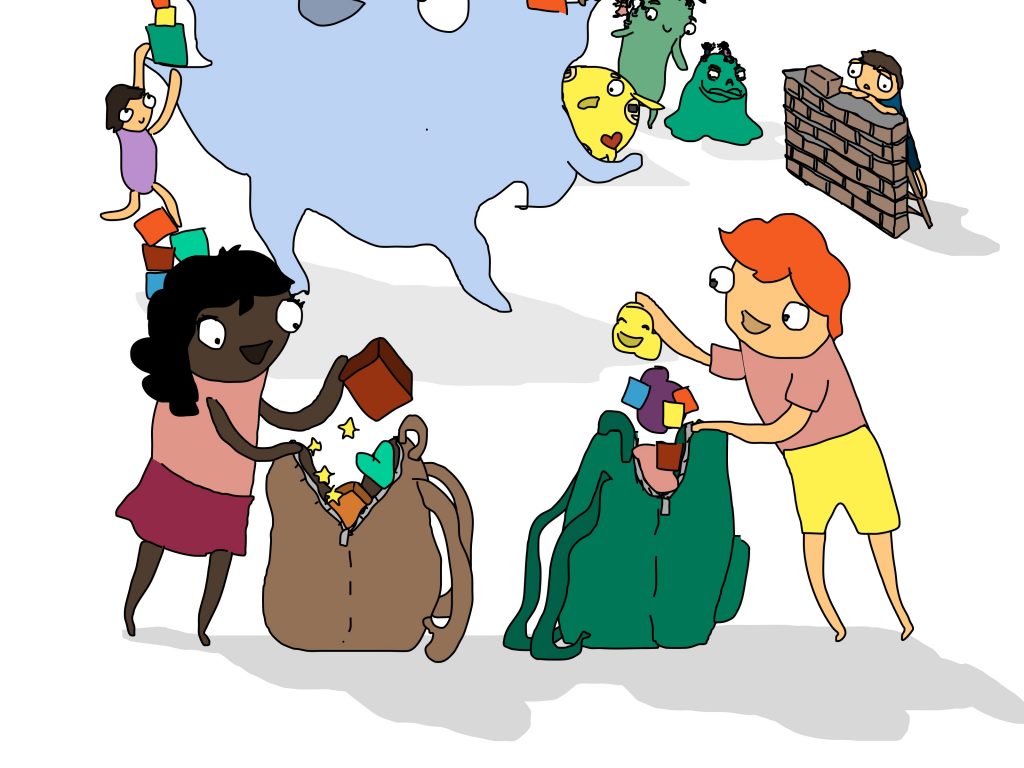 Henk didn’t understand that at all. In his own unconscious living he didn’t need that shared experiences and colorful memories.

“I can live all by myself and don’t need anyone else!” he would say all proud of himself. But was this attitude truly making his life worthwhile?

One day he looked at his own backpack and would shake it a little bit behind the wall. But not much was there to be found. 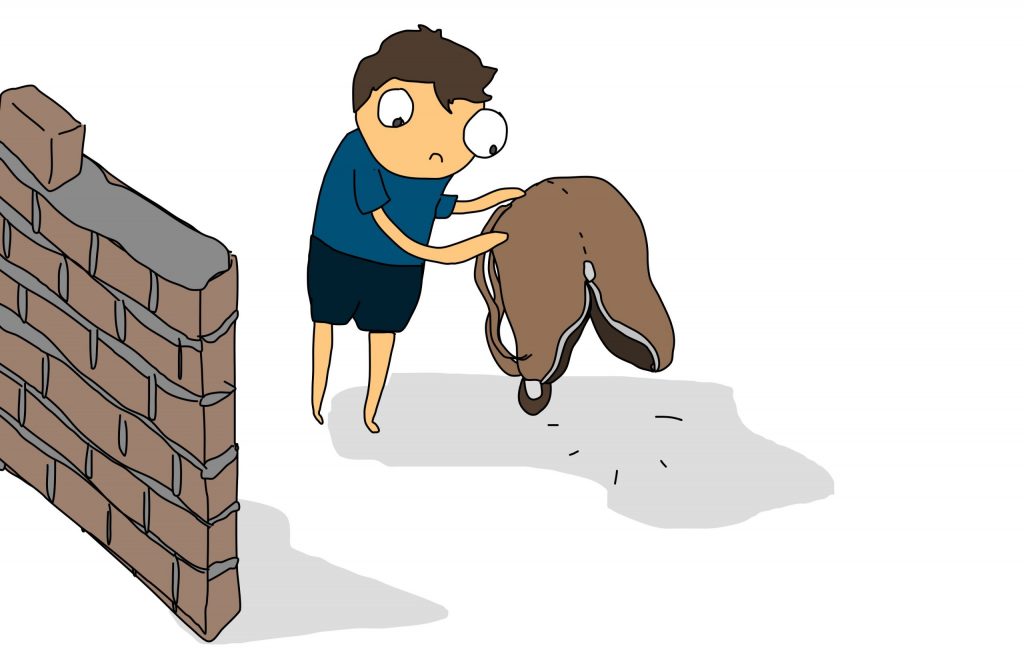 Henk walked into a world where it was difficult to identify with anything. Dark colors overtook all that could be bright and beautiful. His own curiosity turned into a world in which this darkness became a familiar color.

There was this monster which was the embodiment of that darkness in a fishy appearance. No-one really knew why the monster was fishy. It just turned out to be so.

The fishy monster approached Henk and it was really hard to tell where this monster was after. The colorful monsters carried out a sense of wanting the best for Henk. He was feeling strongly that this wasn’t the case with this monster.

The monster whispered in his ear, “Hey, do you see that tail over there? You can take a beautiful walk over it and you will forget about all your insecurities!”

Henk didn’t trust the fish monster and he was running away very fast. And he could run that fast because of his empty backpack. 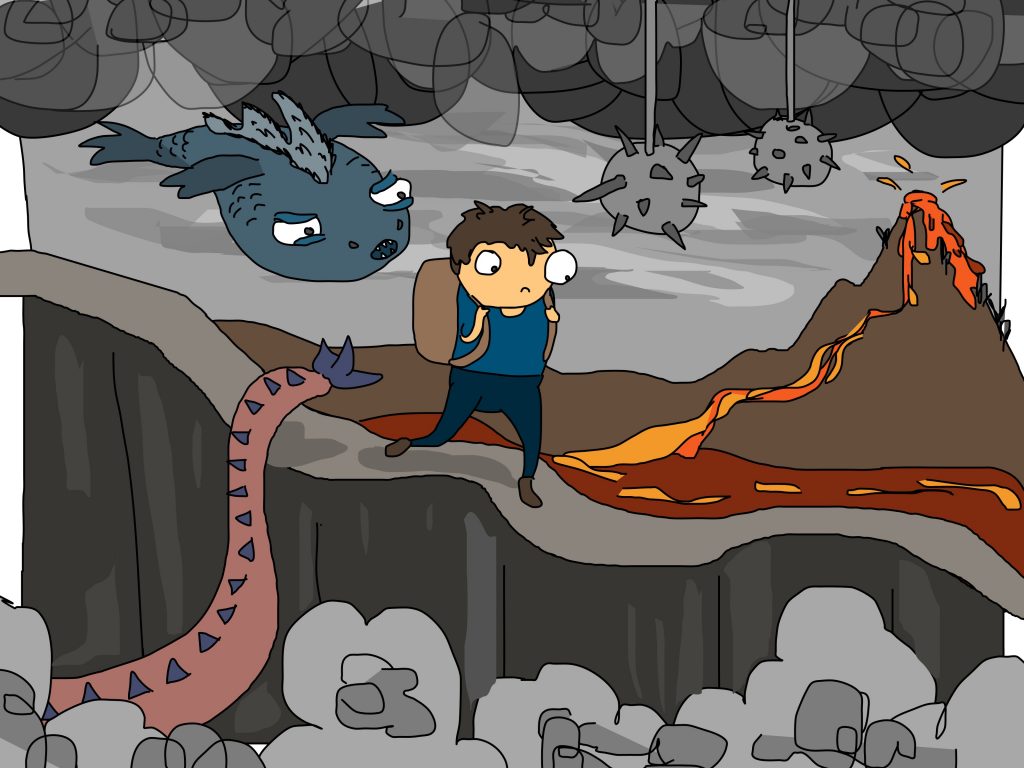 Luckily for him days became brighter as this was always the case in the ever changing emotions that he felt.

One day he was seeing something that really struck him. In his walk of discovery he found out people doing all kind of hikes and cycle adventures. In nature, countries and cultures far away.

Henk took another somewhat closer look and tried to understand what these people exactly were doing and why they all looked so content with life. The strange thing for Henk was that they really seemed to live in a world with not any meddlesome monsters.

“What a world would that be!” Henk yelled unintentionally out loud in his own joyful discovery. 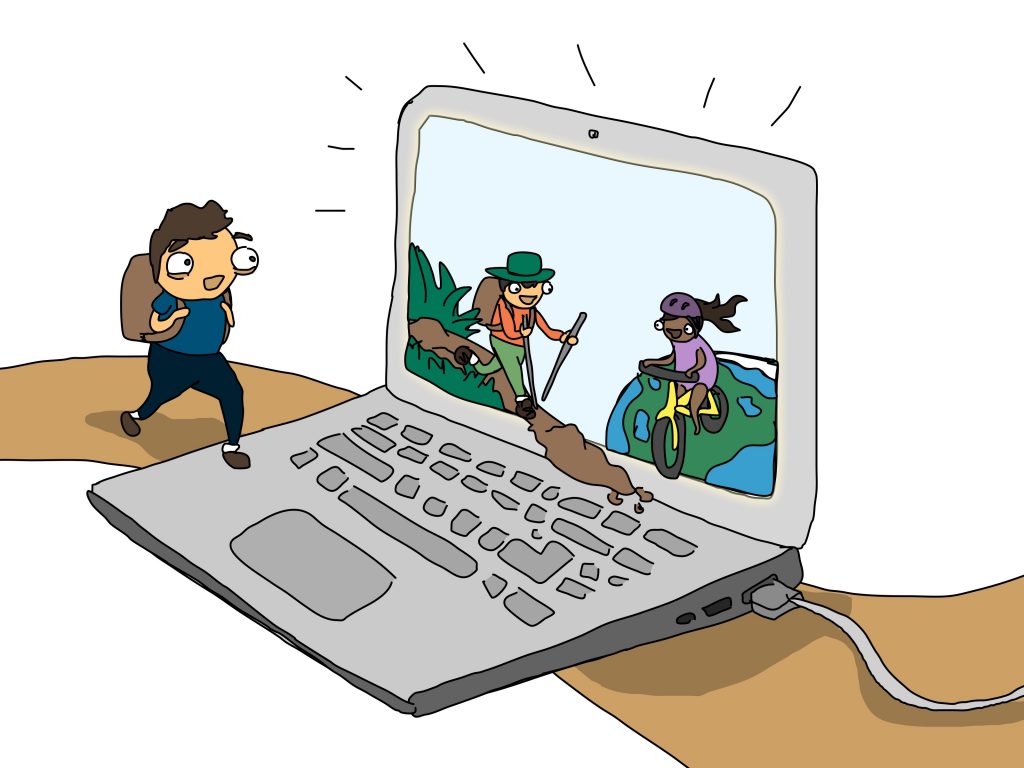 This one day, everything changed for him.

Suddenly Henk became all filled with excitement about life and the future. He started to visualize himself riding a bicycle all over the world. With every puzzle piece he connected an ever-increasing dreamy picture of roads that went through impressive mountains.

It was the start of a life changing dream that involved a bicycle, some gear to overnight and some muscles in his legs to take himself to places far away. 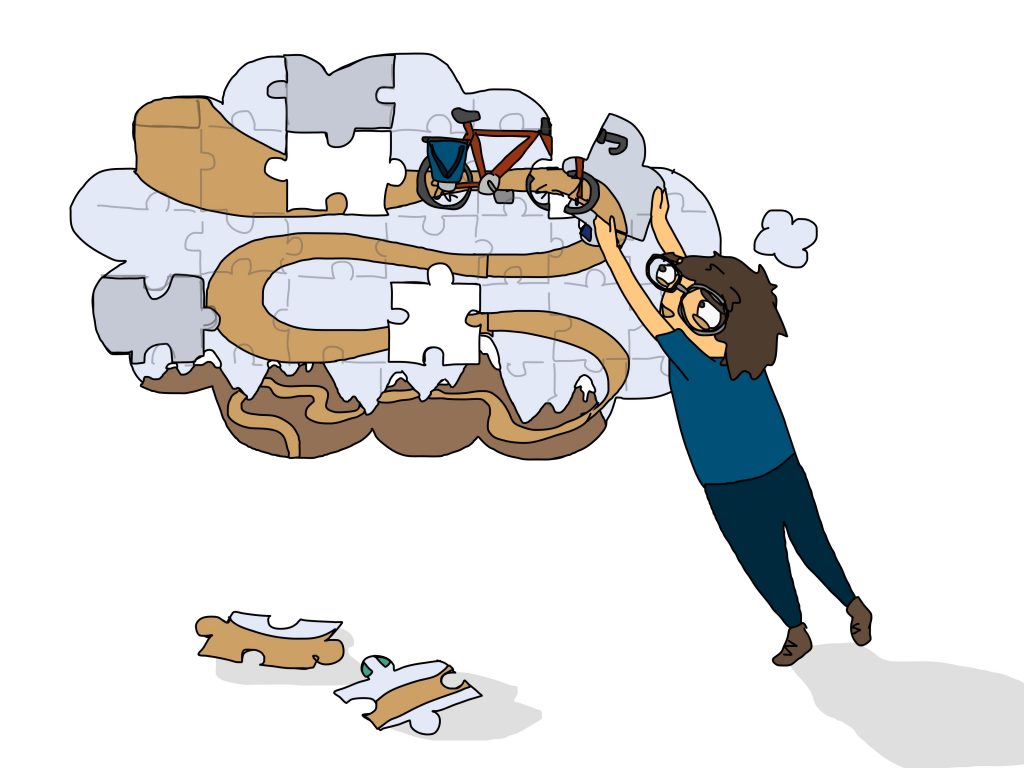 Worries that would occupy him dissolved like snow in sunlight. Something grew in Henk and it was something that filled all hope for a future without any worries. Away from all the monsters that seemed to create his worries in the first place!

And so Henk wandered in his first real dream as an escape plan to find liberation of his own imprisonment. The idea was becoming real, a journey alone on a bicycle.

At one point everything was decided and there was no turning back anymore. 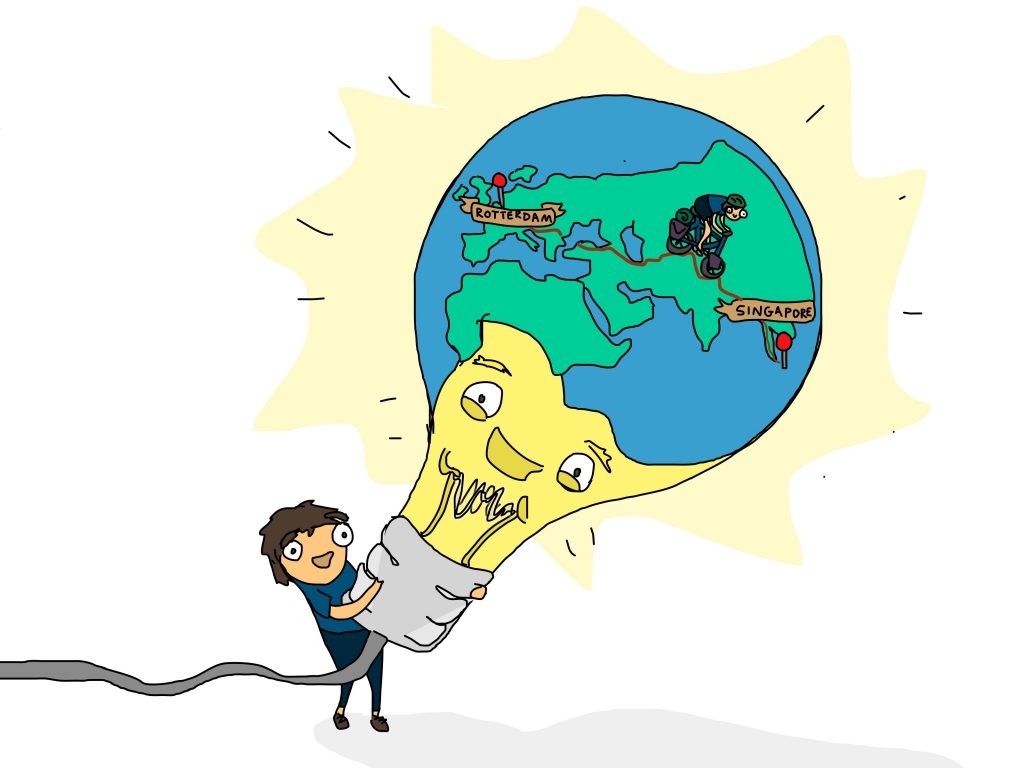 After he bought a bike and some equipment like a tent, sleeping bag and some other things, Henk cycled away from the wall and all monsters. He soon discovered that there are monsters everywhere. But they looked peacefully and happy and open for all kind of connections.

Some even looked amazingly funny and interesting.

From a world where Henk felt lonely and often sad, he cycled into a world where he could make space for his own emotions and allow himself to really feel content with what he was doing. A feeling that came from a place deep inside him. 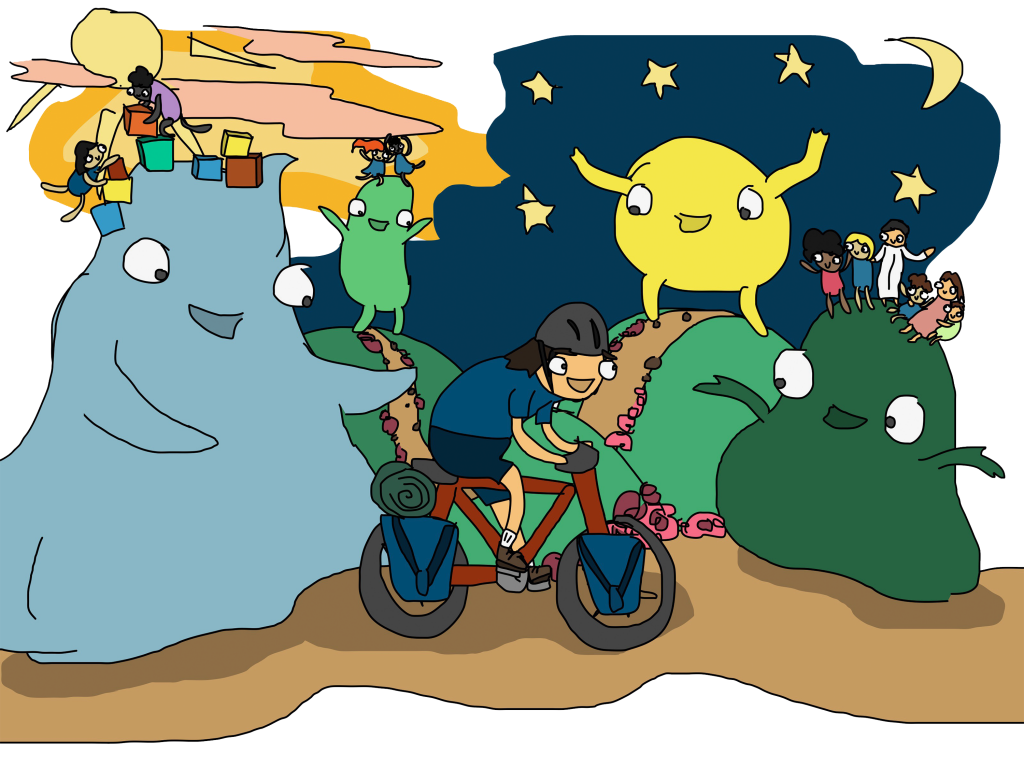 A world of magical adventure

His problems suddenly seemed very small compared to a large world with magical adventure. And the good thing was that Henk learned to keep life simple and only worry about things that did matter. 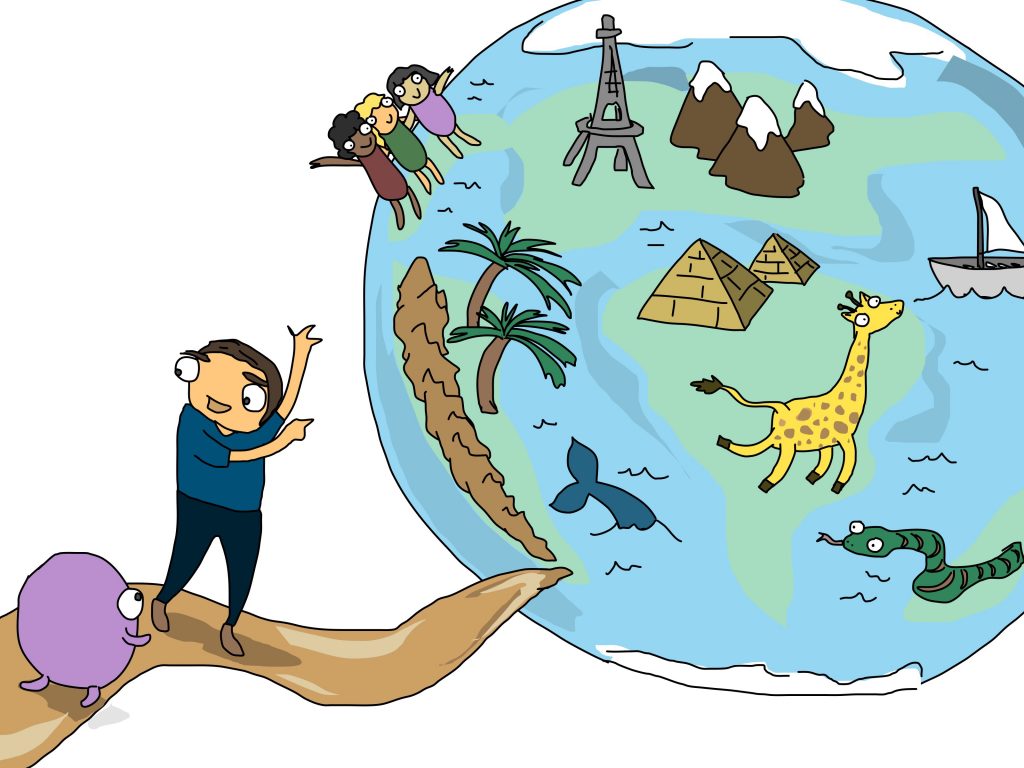 There was a place this one monster had warned Henk so much about.

A place with some angry person ruling an evil country. At the point he arrived in that place he surprisingly realized that people were sweet and caring for him. People who were unknown to him but soon a connection was formed. Even with being a lonely stranger these people created safe spaces for Henk and took care of him with all kind of delicious food and even heartwarming gifts. 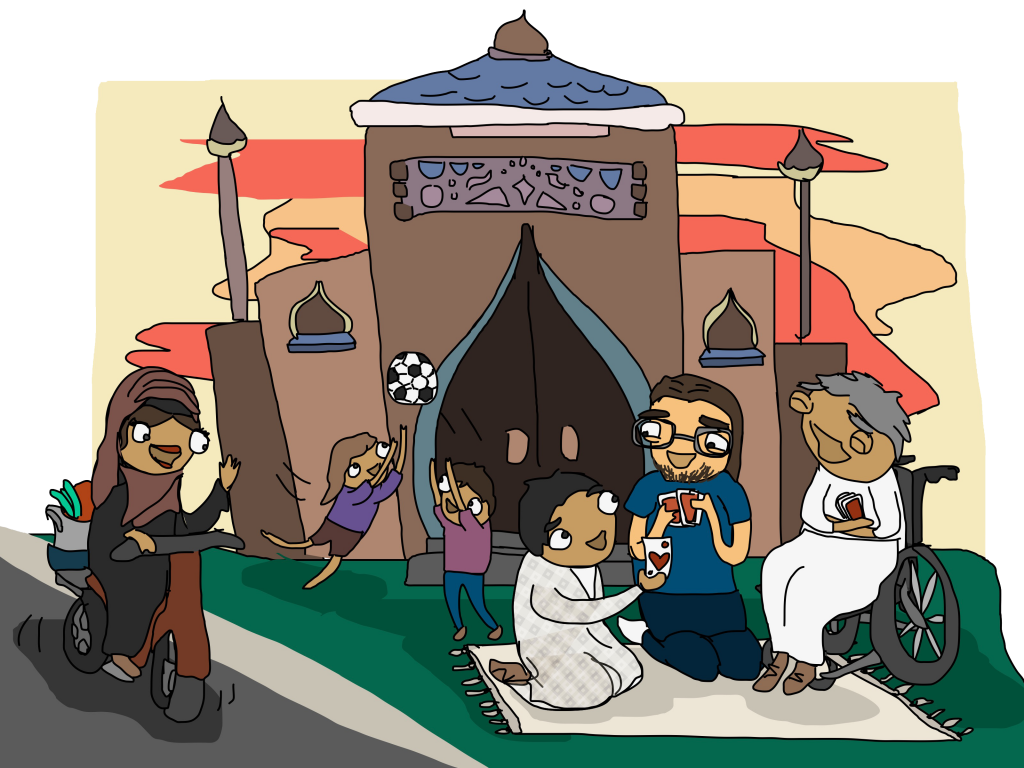 These moments there was this twinkle in his eyes, like he was saying to himself, ‘life ain’t so bad after all!’

Henk let go of a lot of past conditioning and became more and more aware of what privileges has been given to him just because he was a white person being born in a wealthy country.

It was this understanding over important values. Values the monsters tried to teach him from behind the wall when he was little but he never could really connect with them. 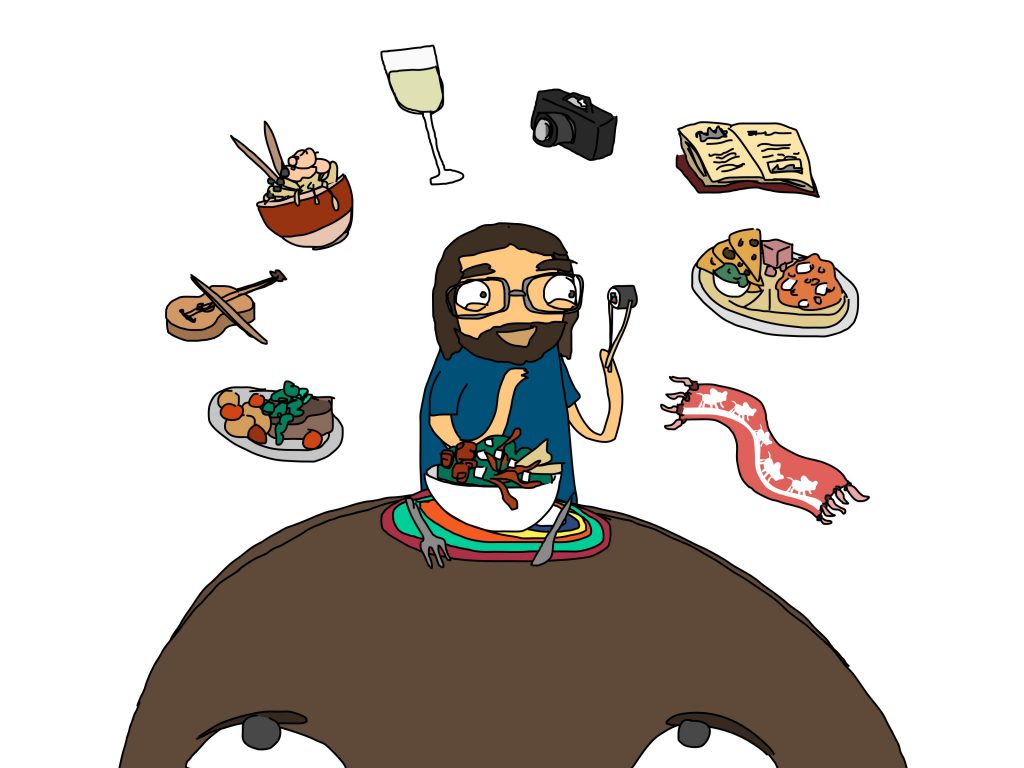 The law of nature

Henk grew up in a world where he felt strongly connected to negative emotions from his childhood memories. A world where everything seemed to be about him and his feelings. It made him afraid of his own story and his own thoughts.

Through all experiences of traveling by bicycle Henk got to understand that he is part of a larger world far more greater than only his own little hidden place behind the wall. This understanding made all thoughts of himself instantly vanished. 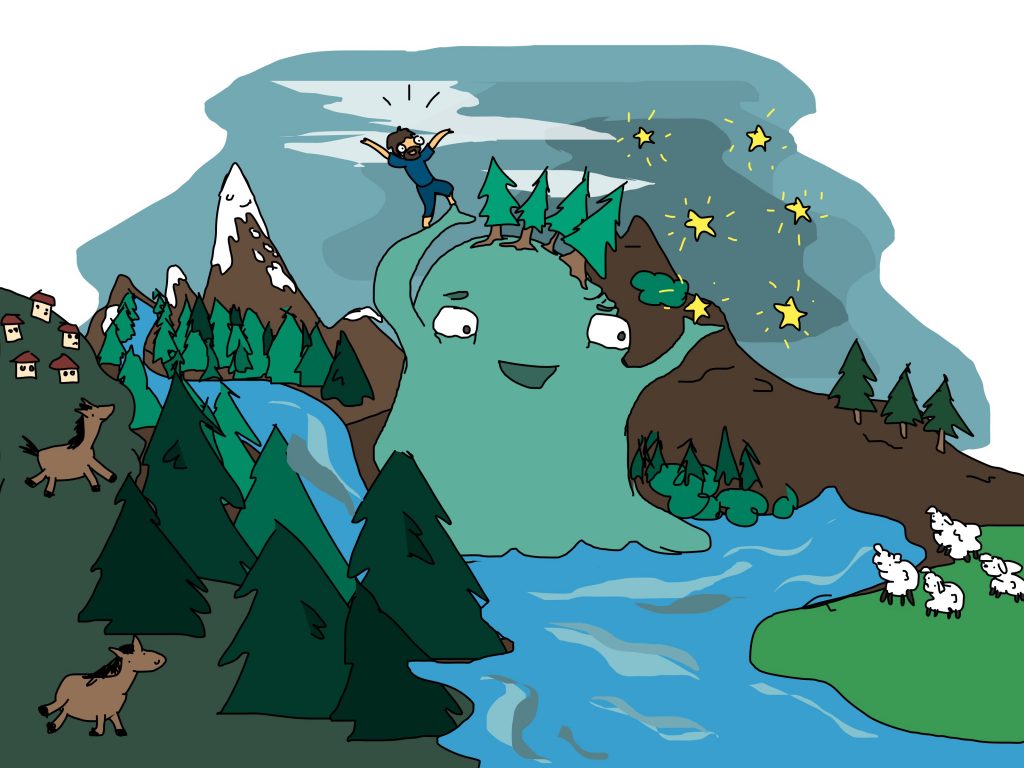 There was this joy that sparkled from deep inside of him as he was always living his own thoughts but now it had changed. People were no more strangers to him however they looked and what age they may seem. He was just consumed by the wonderful feelings of happiness that came from all the experiences and encounters along the way. 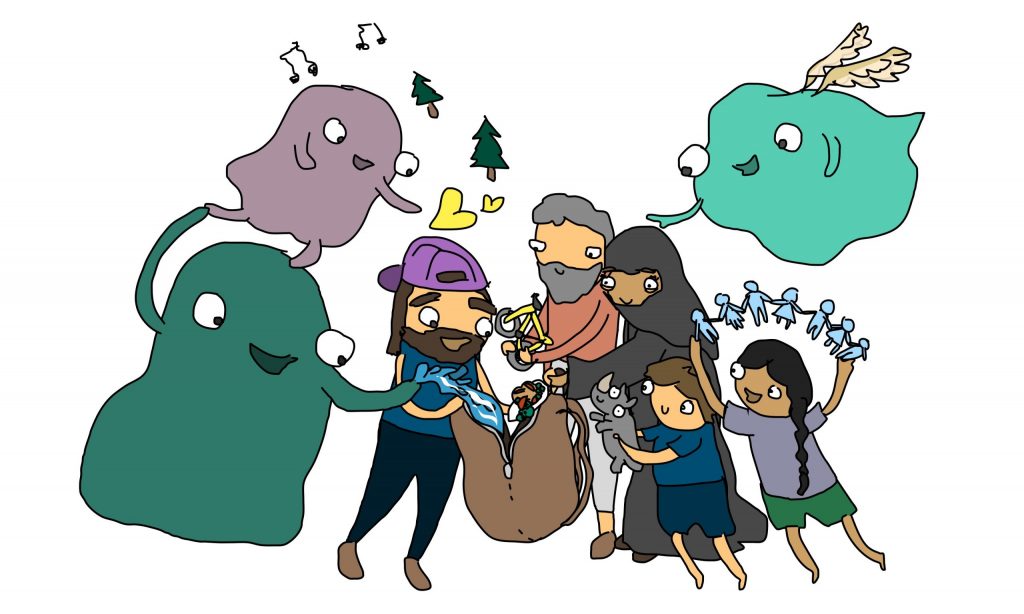 One day in his journey, Henk came across a large, weird but very friendly monster that felt soft and looked like a potato.

“Life itself is nothing until it is lived,” this fluffy monster would say while pointing his finger, “it is we who give it meaning and value is nothing more than the meaning that we give it!”

Henk would give the potato monster a cheeky smile as he was trying to give the impression that he exactly knew about the wisdom that was just told. It was only later in his journey that this words started to make sense. 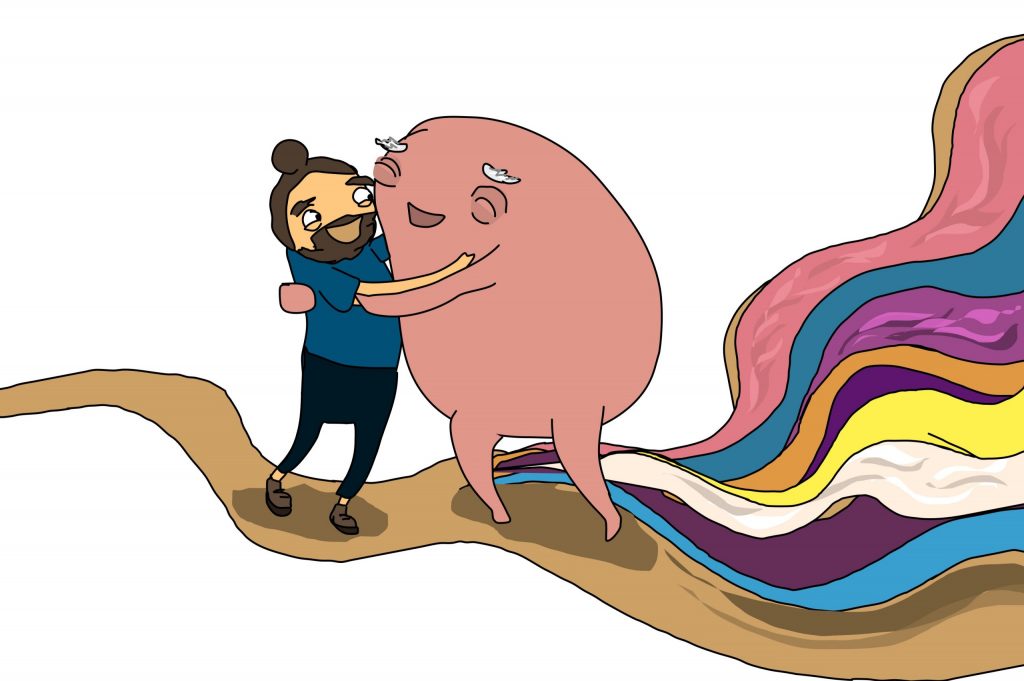 The journey wasn’t that easy all the way, still there were these conditioned reactions from the past. But gradually he would break the pattern of conditioned reacting that involved negative emotions and became each time more aware that these sensations were constantly changing. 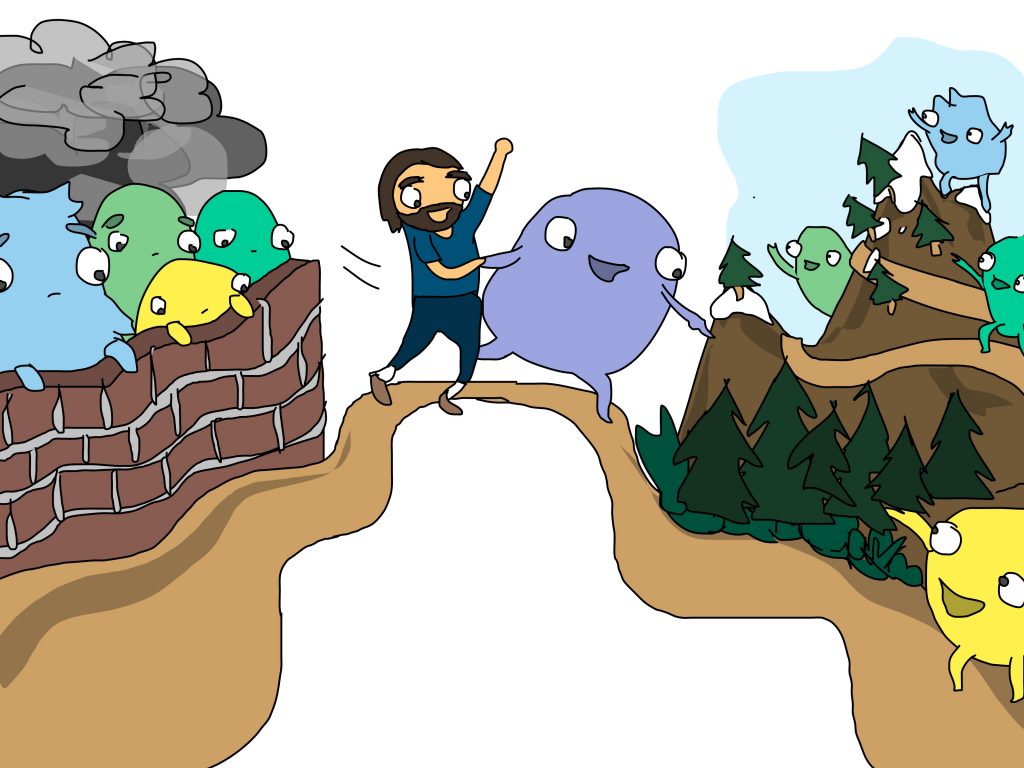 One day Henk came to such high altitude on the mountains when winter was approaching. He would feel scared because of the cold being merciless. Luckily Henk would embrace that coldness as part of the ever changing natural seasons.

The cold helped him to be deeper connected with his own being. 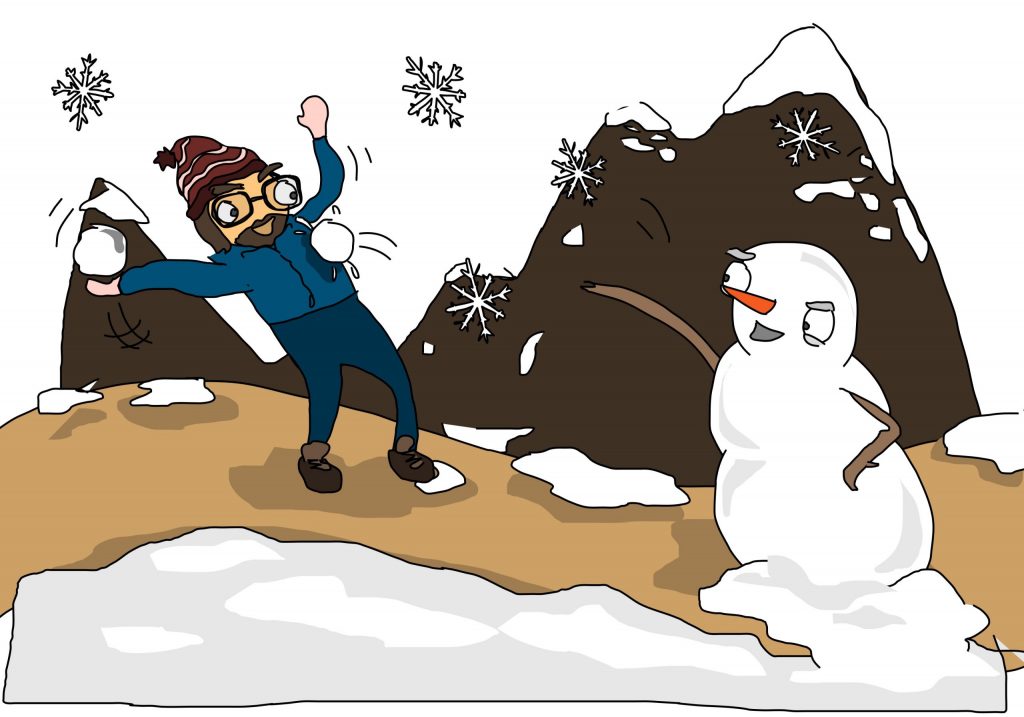 And the other day something really special happened. There was this brief moment which was very powerful. A moment in which he felt his thoughts tossed back and forth between gloomy childhood memories and a now wonderful adult life.

“Happiness isn’t really the point,” he would think in that moment “Feeling sad and feeling anxious is an important part of human life and if I don’t make space for it I just keep collecting sadness”.

He would walk slower than ever, but with a loaded backpack on his back. All filled with more awareness of his own being, that in order to change himself, he first had to become comfortable with his uncomfortable self. 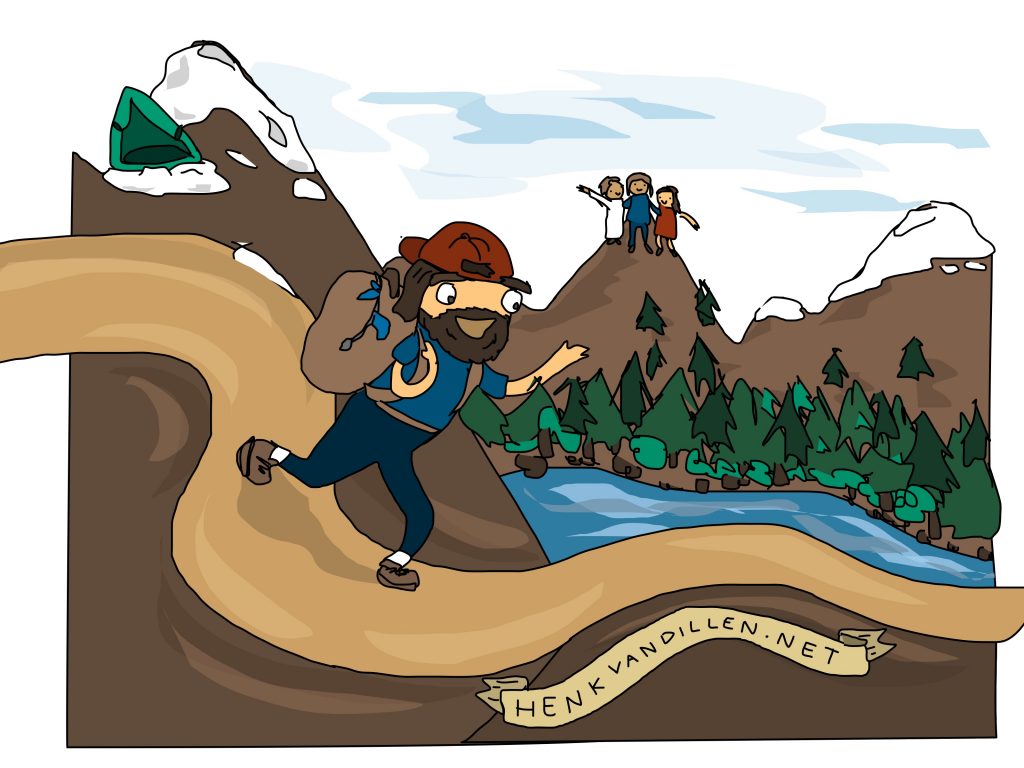